Another facet of doll artistry involves politics. One of the first political dolls was the Ideal Toy "Teddy" Bear, named for and inspired by President "Teddy" Roosevelt.  Since that time, many politicians have inspired artists to place their hat into the political arena with their favorite canditate.  Here's to the political dolls that were designed for the masses.  The portrait shown here is an original one of a kind caricature Abraham Lincoln wall sculpt portrait art by Jon May of Morphystic Personalities. (His eBay ID is jamax8440).

The purpose of this lens is to entertain and inform.  Here you will find an impartial source of products and art related to the Presidential Memorabilia and Election market.  Also, small samples of historical presidential political memorabilia are featured here along with a few of today's headlines.

A New Kind Of Political Doll

Meet artist David Baker, also known as ECapitalist on Etsy. ECapitalist is a sculptor by trade, but he did not start out that way.

When the artist first contacted me with his work, the first thing that caught my eye was his presentation. It is quite impressive, and, in my opinion, one to be applauded. As one of the many disenfranchised artists and workers in this world, Mr. Baker did not just sit back on his laurels and accept what the world was offering him, he decided to take matters into his own hands peacefully. The result is ECapitalist's Platter Heads.

David Baker explains that his art begins with sculpting the heads out of modeling clay, then he makes a mold, and casts them in resin. The result is a paperweight sculpt that is the approximate size of an apple. What I love most about this artist is his sense of humor, and non political affiliation. This guy is a genuine taxpayer who has been cut deep by both the left and the right. When one sees web site and reads his detailed description of each of the political dolls he has created so far, one can see that his work is genuine, from the heart, and down right comically correct. In fact, I haven't met anyone yet who has seen his work and did not laugh.

Mr. Baker's work fits perfectly here, and we are confident his Platter Heads will be the real stars among the Political Dolls featured here.

When I asked Mr. Baker which Platter Head was his favorite, his reply was as candid as his work. "I guess my favorite Platter Head so far is Sarah Palin. She was very difficult to do compared to the rest. Sarah is known for being very pretty, so I had to make an "attractive" caricature. The females also need more painting because of the make up. I redid Sarah Palin four times before I achieved a result I was happy with. The final sculpt is where I decided to do her winking, that was a bit of a challenge but I was happy when I was finished. Her hair was also a very big issues, I had to have my girl friend model a french twist and I spent hours looking up different hair styles. I redid the hair alone four or five times in the final sculpt."

Barack Obama Political Toy designed by John K., creator of Ren and Stimpy
When you talk about candidates on the run, Barak Obama is in the news. Thanks to the support of Oprah, Ted Kennedy, and John Kerry, Obama's movements have been tracked and scrutinized to the point where he as been turned into an action figure. This would make a great addition to any collector's political doll diorama.
Buy Now

If the creator of this doll did anything, it was to emphasize that the successful presidential candidate of 2008 must exhibit both political form and function - yet not be offensive to any party.

Although this doll was designed for the masses, it deserves a place somewhere in the political doll walk of fame.  This is the art of the political doll at its finest, and kicks off the New Year just right.  Here's to the designers of  theHillaryNutcracker.

Hillary Cleans Up - Just when you thought you've seen it all . . .

Hillary Clinton 1st Cleaning Lady Toilet Scrubber - Bowl Buddy
It took some deep thought for someone to create and market a Hillary Clinton nutcracker, but someone thought it would take more than a village to clean up The White House.
Buy Now 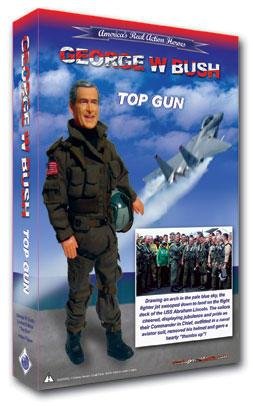 Face The Candidate - Go Head On With The Issues

Hope you had some fun here, and saw something that made you smile.