Nappy Roots are rapping about are things we can all relate to, things we should all listen to. When most think of Hip Hop or Rap, they believe it's all about sex, money, drugs and violence. And while that's true for alot of artists, some are changing that perspective. Nappy Roots are about positivity. Making you think, realizing there's more to Rap then money, guns and drugs. That's not reality for most of us. Their music is for everyone. To take the words from Nappy, "long as you stay in your means and you know you keepin it real with yourself, that's Nappy right there".

Since you are here, either you've heard of Nappy Roots but don't know too much about them, or you've stumbled in here by accident. But either way you are about to find out about 5 amazing musical masterminds.

Nappy Roots is a hip hop group like no other. The 5 members are Skinny Deville, Fish Scales, B. Stille, Vito Tisdale and Ron Clutch. Scales was raised in Milledgeville GA, while the rest of the guys come from KY. R. Prophet, one of the original members left the group to pursue a solo career in The country influence is heard, giving Nappy Roots an unique sound.

Nappy Roots began when the group met in college. Their debut record Country Fried Cess followed soon after, dropping in 1998. The record got the attention of Atlantic Records, and Nappy signed with them.

Their second album in 2002, was one of their biggest hits to date. Certified Platinum, Watermelon, Chicken and Gritz is the album most people think of when they hear Nappy Roots. The singles "Aw Naw" and "Po' Folks" were heard on the radio and the videos for the songs were played on TV music shows. Nappy Roots went to the top of hip hip charts. They won multiple award nominations and toured around the world.

The third album released, Wooden Leather was Certified Gold and had the highest Billboard 200 rating to date, hitting #12. They once again made it on TV with the video for "Roun The Globe"

After the release of Wooden Leather, Nappy Roots decided the best move for them as a group, would be a move away from Atlantic Records. Citing "ecomonic differences", they broke contract and started Nappy Roots Entertainment Group (NREG).

It was undeniably the best move Nappy Roots has made. The music they have released since the start of NREG shows the artistic genius these guys have. The first album released in 2007, Innerstate Music was an Internet released mix tape, intended to create hype for their album The Humdinger.

The Humdinger was released in 2008 and was one of the most slept on albums Nappy has released. Nappy Roots were still learning the art of marketing and Humdinger did well but not as well as hoped.

Always willing to live and learn, Nappy kept going. They started a marketing campaign aimed at the major Internet Hip Hop sites, including 2dopeboyz, AllHipHop and HipHopDX amongst others.

In 2010 they released the much anticipated Pursuit Of Nappyness, which is in my opinion, their best album. From the beats to the lyrics, it shows who they are, and what their movement is about.

The Mixtapes And Nominations

- September 16th named Nappy Roots Day in the Commonwealth Of Kentucky. Nappy Roots given the distinction of "Kentucky Colonels"

- Grammy nominations for Best Rap/Sung Collaboration, shared with Anthony Hamilton for Po' Folks and Best Long Form Music Video for The World According To Nappy, shared with Gloria Gabriel and David Anthony.

Why I Wrote This

I was blessed to meet the guys of Nappy at a couple shows they did. They are very much the men that you hear in their music. They are down to earth and very humble. They believe in what they do, their movement and themselves. And so do I. 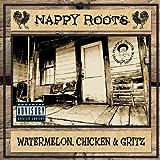