Rapper Drake Depressed Has He Sold His Soul?

Has Drake sold out?

Drake at his Party

Ain't it funny how money changes people like that

I have been a big fan of Drake, listening to him well before he blew up. But since he got a deal his sound changed, his content changed, his whole attitude changed. I have still listened because he is a talented artist but the transition from his earlier mixtapes to his recent releases is a a saturated version of Drake. A money minded Drake who has sold his soul to a record label.

His newer lyrics were really nawing at me so much so I stopped listening to rap completely for a week. I came back to new Drake releases and more vainity. But I feel it is more than vanity or selling out as it would appear from audacious lyrics like "I also can no longer converse with you thousandaires."

Upon seeing the recently released pictures at Drake's 23rd birthday party I saw a very unhappy person. There are pictures of people smiling and poping bottles, but every picture of Drake is lifeless. It is not the no smile cause I am too cool, you can actually see the emptyness in his eyes reflecting his pain. Look at Kid Cudi, his lips are upward and he appears to be in high spirits. Drake however looks distant and hollow while wearing a slanted hat covering his face as if to shield himself from the world.

"I’m still awake getting money while the sun is up"

"I also can no longer converse with you thousandaires"

"Mixtape dropped then I started getting 10 a show, now I get a hundred what the f-ck you think I’m in it for, Young money forever "

My View on Drake

"I was hesitant at first and fear what it would change, now I’m high off the success and faded off of the fame and still managed to keep all of my opinions the same " - Drake

Okay, I have to disagree with you Drake yeah you may have rhymed about phantoms in the past but that was all in good fun when you didn't have one of your own, it was a lease. Now that you have money you have turned into an arrogant person who has nothing of substance to say.

Do you feel Drake's lyrics have changed?

"And I ain't trying to generalize every video girl, you know what I mean?

Accept the fact that there's times that you gotta better yourself

You know as a person man. I love to see my black women strong, single,

Independent. Doing they thing without popping they booty in some rappers

Video you know what I mean? It's a wonderful thing baby. So uh, don't hate me for

This one ladies. Just take my advice you know what I mean?"

Breast I Ever Had

Despite this song, Drake makes his first major video (After So Far Gone released) just the kind of video he was criticizing on a past record.

Brings me back to the topic of Drake's uphappiness. Do you think he has comprised his position on issues to fit in? Because maybe he is insecure despite the "olympic pools of money" reflecting his success.

"uhh, but I guess things change,

its funny how someone else’s success brings pain,

when ya no longer involved that person has it all,

and you just stuck standing there"

There is three ways to interpet these lyrics

"I should wanna go back to the one I started with,

There is two ways to interpet these lyrics

"What's a star when its most important fan is missing"

The last lyric truly shows how all the success can mean nothing if it does not bring happiness. 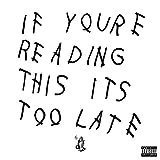 If You're Reading This It's Too Late [Explicit]
Buy Now

"This is me.
Still the same.
They want the hits.
I play the game."

This is him saying hey it's really me, I haven't changed.

I want to please other people by making hits so I go along with it even if its not me.

"And people seem to notice every time I do smile.

I guess that mean they come few and far between.

Even though am living out what you would call the dream."

This goes along with my argument that despite success, Drake is depressed.

"And my uncle aint even messaging me.

And him missing in my life is kind of messing with me.

I hope this isn't one of those forever things.

Its funny how money can change everything."

Just reflect on that last line.

"You know I spend money because spending time is hopeless.
And know I pop bottles cuz i bottle my emotions.
At least I put it all in the open."

Is Drake's new extremely cocky persona him attempting to hide his insecurities?

The Fun is So Far Gone

I believe Drake is no longer enjoying making music. The allure for Cash, Money, and Hoes has yet to fill voids in Drake's life.

"Say Something" and 'Fear" are two honest songs that reflect Drake's unhappiness.

"Its funny how money can change everything."