Review Of "Secret Alphabets" By Greenleaf

In hindsight, it was to prove sadly fitting that Greenleaf entitled its album Secret Alphabets because, even though the musical language it used to write the record was a beautiful one, it was a language few seemed to understand, as it was yet another great Post Commercial album that was, by and large, ignored.

The fusion of two stalwarts of the “Stoner Rock” scene: Dozer and Demon Cleaner, the band is considered by some to be a mere “side project,” but to think so would be remiss for the music, which Greenleaf has tendered the public over the years, is every bit as powerful, as the bands whence its members came. This can be heard in abundance on the album's second track 10,000 Years Of Revolution. The main guitar-figure, with its slashing barre-chords punctuated by a massively heavy end-tag, lays to waste all the so-called “Rock revivalists.” Here too ones sees that, like many guitarists in the “Stoner Rock” genre, Tommi Holappa and Daniel Jansson know how to do guitar-tones right, as their tones are warm and thick, a far cry from the brittle, shrill, scooped mid-range sound, which is so in vogue amongst so many modern, Heavy-Rock guitarists.

Like the sonic equivalent of riding with Rob Zombie in his Dragula on a mountain road with hairpin turns, Witchcraft Tonight is a twisting, turning, rollicking rave-up, making dark fun for the whole family. Of special note is Bengt Bäckes' bass-tapestries, which he weaves towards the end of the song.

Starting off with a very catchy Bengt Bäcke bass-line, which is doubled on guitar, Never Right showcases Fredrik Nordin's versatility on vocals, as his voice takes on a Paul Stanley quality. Always able to sing in a high and clear manner in Dozer, it is even more impressive he is able to make himself sound like another singer entirely.

Showing its haunting, psychedelic side, the band's track The Combination features spectral guitar-figures drenched in eerie reverb and heavy phasing. Together with an equally haunting vocal-melody on the part of Nordin, this would be a perfect fit to a disturbing, atmospheric horror-film.

The album's sixth track The Spectre, is a lively poltergeist of an instrumental that seems to bounce off the walls. Like Black Sabbath did in Rat Salad, Greenleaf deftly melds Jazz and Heavy-Rock as Holappa and Jansson throw complex Jazz-chord underneath their tasty phase-drenched soloing.

The seventh track (and this reviewer's favorite) is the funereal Viking-dirge One More Year. Drawing on their Nordic roots no doubt, the band abetts a slow, solemn Sabbathy riff with Norse chanting, making for a devastating combination of the atmospheric with the heavy.

Combining Heavy-Rock with the feel of a military march, is Black Black Magic. A triumphal song of self-determination, the track finds Nordin reverting to his Paul Stanley vocal-style once more.

With its eerie, droning guitar-riff, which falls somewhere between an Indian raga and Iommi's more meditative, heavy riffs, Masterplan features an achingly wistful vocal-hook from Nordin. The members of Greenleaf make it seem so easy despite the fact that merging a great guitar-riff with a great vocal-hook is no mean feat.

Lastly, is the song No Time Like Right Now! A song about being resigned to the fact that one must press on, this is a track, which features something that is virtually non-existent in Rock: a lyrically heavy riff played at a slow tempo. So many heavy guitarists have become so dependent on palm-muting open-strings and playing them as fast as they can that they have forgotten the riff-making approach, which Greenleaf clearly remebers.

All in all, Secret Alphabets is another superbly crafted album, which has been carelessly tossed into the Memory Hole by the cluelessness of most Rock fans. Let us try to reverse that in our own small way. 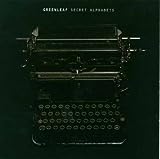 A Source For More Great Bands

"One More Year" By Greenleaf