How is Halls of Frozen North Different from Other Catamenia Albums?

Finnish black metal band Catamenia, the band that has been providing us with such great songs as Verikansa, Coldbound, and My Blood Stained Path got off to a very different kind of start that what we have been expecting from them. Their 1998 debut album called Halls of Frozen North released in 1998 is an early black metal release that sees vocalist Mika Tonning use an even raspier growl than even I have heard from him. The first song called Dreams of Winterland has a definite early 1990’s Blind Guardian influence in it with the acoustic passage that starts the song. Catamenia’s music is especially suitable to listen to on colder days especially when winter is still upon us and the night sky does not have the sun to provide sunlight.

The album’s title is very indicative of how cold that region of the world gets during winter. That region referred to here is that of Northern Europe excluding the UK and Ireland. Northern Finland is frozen for several months of the year.

The Lyrical Themes of the Song Into Infernal

Into Infernal is a fast drumming kind of black metal song similar to songs that Impaled Nazarene or Dimmu Borgir would write. The lyrics depict a situation in which darkness takes over from the light of the day. Well it is actually more complicated than that but you get the picture. The vocal growls even resemble British black metal band Cradle of Filth as there are also deep vocal growls mixed in with the screeches by Mika. For some reason, winter is seen or depicted by many people in the world as a time of despondent feelings, darkness, and cold weather that seems endless. Well, Catamenia manages to make things musically interesting even when they have lyrics that are so dark in nature. Catamenia is not as gloomy musically as doom metal bands such as Tristania. The song has very fast drumming, a musical trait which is also common among bands that play the grindcore style.

The lineup at this time was very different than in the later albums. Playing as the other guitarist on this album is Sampo Ukkola. Toni Tervo plays the drums. Even the title track has very gloomy lyrics but Catamenia’s technicality and musicianship will keep your mind off it in time. The symphonic nature picks up in this song as I hear shades of Tristania in this song.

What is Halls of Frozen North Really Like Musically?

This being the first album of Catamenia, there would be things that would be improved upon as the band matured. This album has fast drumming but the vocals are not as good as those of OJ Mustonen, the man that would replace Mika Tonning on vocals.

Halls of Frozen North Flaws: Too Much Pure Black Metal and Musical Exploration

Forest Enthroned is a song about a lost person walking through a forest at night as something is calling him to come. It may be an enchanted power unknown to him. Halls of Frozen North is predominantly a pure black metal album that has less melody in it. For some bands, since when they just start their careers, their debut album may be a sign that they are just experimenting with certain sounds and styles and they just want to see what works best for them. Also, for some of these songs, the lyrics aren’t even listed so it is tough to interpret the messages in these songs. Child of Sunset is a song that starts with the sound of coming thunder, similar to the way in which Children of Bodom began their career in their debut album called Something Wild. Land of the Autumn Winds is a song about these kinds of powerful winds that cause rivers to freeze as the trees wither away.

Halls of Frozen North may be the weakest album from one of Finland’s elite black metal bands but it is still a good introduction to pure black metal for the music fan that is just getting into the band’s music.

Freezing Winds of North begins with a sound that sounds like a wind is blowing and the air may be hitting our faces and then the Cradle of Filth style vocals come in. What score does Halls of Frozen North get? I would give it a 78 out of 100 points.

A Map of Oulu, Finland Where Catamenia Was Formed 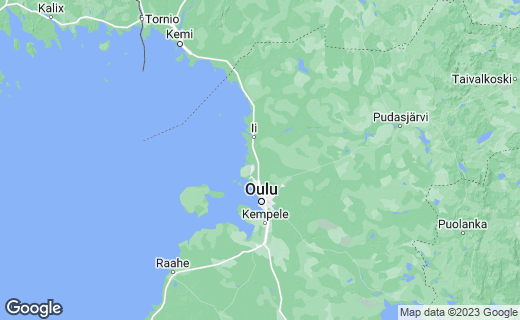