Roy Harper - one of the best British singer-songwriters

Roy Harper is one of the UK's finest singer-songwriters and yet you won't have seen his singles riding high in the pop charts. Nevertheless, Roy has been able to call upon some of the biggest names in rock music to grace his albums - Jimmy Page, Kate Bush, Paul and Linda McCartney and Dave Gilmour are among the top stars who have been part of his very long recording career.

Roy Harper is a songwriter and guitarist, who has released over 20 studio albums as well as many compilations and live albums, and has had a very great influence on many acts. Harper's songs have been covered by Dean Carter, Green Crown, The Kitchen Cynics, The Levellers and Pete Townshend of The Who.

Led Zeppelin gave tribute to Roy Harper with their version of the traditional song, "Shake 'Em On Down", which had been originally recorded by blues-man Bukka White. Led Zeppelin called it "Hats Off to (Roy) Harper", and the song was included on the band's album Led Zeppelin III . 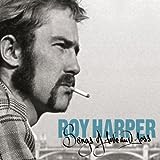 Roy Harper started off very much in a similar vein to Bob Dylan, Donovan and the other singer-songwriters with an acoustic guitar back in the late sixties. Again like Dylan, Harper lists Woody Guthrie as one of his biggest influences.

He was a busker at one point and songs like Sophisticated Beggar (from the 1967 album of the same name) and You Don't Need Money make reference to this period in his life.

In the latter song Roy sings: "Nobody's got any money in the summer, oh dear me, what a terrible drag..." With the way things are today his song makes as much sense now as it did then.

I first came upon his work around 1969 and saw him many times at festivals and other gigs. By then he had Folkjokeopus and Flat Baroque and Berserk , which were his third and fourth albums out.

It is a searing diatribe recounting the damage the "white man" has done and is doing to the world. Harper sings:

"Far across the ocean in the land of look and see

There once was a time for you and for me

Where the winds blow sweetly and the easy seas flow still

Where slot machine confusions and the plastic universe

Are objects of amusement in the fiction of their curse

And where the crazy whiteman and his teargas happiness

Lies dead and long since buried by his own fantastic mess."

Roy Harper writes on many subjects. He writes anti-war and environmental protests, about the unfairness of the world system we live under, and often makes reference to the patriarchal religions which he would like to see an end to. Harper feels just like John Lennon that the world be a much better place without religion.

Roy Harper concerts are always very different and memorable. He has a tendency to talk between his songs but this serves to make the event even more of one in which a personal and emotional communication between Roy and the audience is created.

Roy Harper has a very devoted legion of fans and many will travel far to see him live. I have done so myself and there aren't many acts I can say the same about.

Like Dylan he soon progressed from his early beginnings as a songwriter with an acoustic guitar and began experimenting with his songs and their arrangements. His studio albums reflected this and many of Roy Harper's songs are wonderful works of production, as well as featuring stunning vocals, guitar-work and lyrics.

Harper often uses open-tunings for his guitar, and again like Dylan, often wrote epic songs. He was never worried about the commercial appeal or structure. Roy Harper is a true artist, poet and composer.

Roy Harper's 1971 album entitled Stormcock only had four songs on it. Led Zep guitarist Jimmy Page played on this album but was credited as S. Flavius Mercurius. David Bedford contributed orchestral arrangements and the album was very highly acclaimed by many people.

Roy Harper's HQ , which was released in 1975, and has been regarded by Harper as probably his finest work, includes the song When An Old Cricketer Leaves The Crease , which features the Grimethorpe Colliery Band. This song is so very English, so very nostalgic and so very remarkable in so many ways that I cannot think of anything else remotely like it. This definitely is some of Harper at his best ever!

In 1985, Roy Harper was joined by Jimmy Page again for the album Whatever Happened To Jugula? Roy's son Nick Harper, who has followed in his father's footsteps and has also become a singer-songwriter, also played on this album.

Roy Harper and Jimmy Page performed a number of gigs together promoting songs from the recording.

Five years later in 1990, Roy Harper's Once featured a star-studded cast of contributors with Kate Bush, Dave Gilmour and singer-songwriter and guitarist Nigel Mazlyn Jones all contributing to songs on the album.

Lyrics for the title track on which Kate Bush also sings include the lines:

Kate Bush had also sung on a Roy Harper album in the past when she contributed vocals to the song You on the album The Unknown Soldier in 1980.

In more recent years, in 2005 to be specific, a double album compilation was released entitled Counter Culture . It is made up of Roy's pick of songs from a 35-year-recording career and he wrote the notes for the inlay booklet too. It was released on Harper's own Science Friction label and received a five-star review in UNCUT magazine.

The same year, Harper was awarded the MOJO Hero Award by the staff of Mojo magazine on 16 June 2005 at the Porchester Hall in London. "Hero" is a title Roy Harper wears very well because he is most definitely one of my musical heroes!