4 Girls with Talent, with a capital "T"

In German, Katzenjammer translates to mean 'the wail of a cat.' True, their sound is extraordinary, but I wouldn't classify it as cat wailing. Some of their songs have discordant notes, which I particularly enjoy, but their sound is unique and interesting. The minor keys and their impressive musicianship, with the vast array of instruments they are able to play, and well, makes them a band to be watched. Made up of Anne Marit Bergheim, Marianne Sveen, Solveig Heilo, and Turid Jorgensen, this Norwegian folk band is definitely one to check out. The fact that they haven't exploded onto our pop charts in the United States surprises me, but they have gathered quite a following. Their first Album, Le Pop, was very well received by critics, and they charted in the top 100 chart in the Netherlands. I discovered Katzenjammer on the itunes playlist card given out to attendees of Lilith Fair back in 2010. Their single A Bar in Amsterdam was featured on the playlist, and it's quite a catchy little tune. I checked them out and lo and behold, the rest of Le Pop was equally as enjoyable.

A Bar in Amsterdam

Besides being amazing singers and songwriters, each of the girls play a number of instruments, and they incorporate them into their music. Their live shows are amazing. Imagine playing a few bars on the trumpet and then going right into a lengthy solo. They seem to be able to make music out of anything, and anything can be made into an instrument. In their second and most recent album, A Kiss Before you Go, their most successful single has gotten widespread attention. I Will Dance (when i walk away) has a video that not only shows the whimsy and moxie of this band, but shows their incredible musicianship. Check it out.

I Will Dance (When I Walk Away)

You'll notice that most of their pictures are taken with the big triangular guitar thing with a cat's face on it. This is the contrabass balalaika, and it is a very difficult instrument to play. Most of their music features the accordion in some capacity, and many feature a number of instruments played by each member of the band. Apparently they use two contrabass balalaikas, which are named Borge and Akero. They always look like they're having a good time when they are playing their music. Music should be fun. Some of their songs tell amazing and interesting stories. Music should tell stories. People should be invested in the music. That's what I get when I listen to this amazing band.

Having a good time!

One of my favorite songs from Katzenjammer is Virginia Clemm, which tells the story of Edgar Allen Poe and his wife, Virginia Clemm. The two married quite young. She got ill, and died young as well. It's haunting, and fascinating, and eerily beautiful, and it got me interested in this tragic love story which may just be the very reason Edgar Allen Poe was so chillingly morbid. I researched and found that the song is historically accurate. What a concept! A song that teaches history, and also teaches the power of enduring love.

I could tell you more and more about this amazing band. I could post video after video showing just how amazing they are, and how here in the states, they are severely unappreciated. However, I just want to watch them perform. I'm going to watch some more live videos or maybe listen to the albums on Last fm. You should do the same. Enjoy watching something different from the same pop songs day after day. Check them out; you won't be sorry. I'll be following with more SPOTlights soon. Keep a watchful eye and an open mind.

Do you take your Tea with Cinnamon? 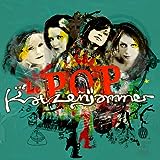