The catalogue notation for Franz Schubert’s Ave Maria is Opus 52, No. 6. This world-famous song is part of a larger work known as Liederzyklus vom Fräulein vom See or Song Cycle from The Lady of the Lake. Within this cycle, the Ave Maria is known as Ellens dritter Gesang (Ellen’s Third Song) and is not a rendition of the Catholic Hail Mary, but rather a separate invocation which simply begins and ends with the words “Ave Maria“.

Schubert’s text was taken from the songs and ballads within Sir Walter Scott’s narative poem The Lady of the Lake. Schubert wrote a total of seven songs, three of which are meant for a soprano, the other four to be sung by a baritone. Ellens dritter Gesang is the sixth part of the work and the third song sung by the soprano who portrays the character Ellen.

"The Lady of the Lake" by Sir Walter Scott

Walter Scott’s The Lady of the Lake was published in 1810. It is an epic poem about James V of Scotland’s attempts to unify the clans. Contrary to what you may think, The Lady of the Lake has basically no connection to the Arthurian legend. The poem’s title is taken from the heroine, Ellen, making her entrance in a boat which arrives in a timely fashion to rescue the disguised king.

Ellen’s father, James Douglas, is a disgraced nobleman who remains loyal to the king. His list of enemies grows, however, when he refuses an offer for his daughter’s hand. When the refused suitor starts a rebellion against James V, Douglas and his daughter are forced to flee and narrowly escape alive. It is at this stage Ellen prays the Ave Maria 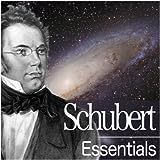 The German lyrics for Ellens dritter Gesang were written by Adam Storck. His version has often been accused of departing too far from Scott's original lyrics. However, Storck deserves credit for at least preserving the rhymes and, despite the criticism, his version is probably about as true a translation as anyone can expect.

As has already been stated, this Ave Maria has basically nothing to do with the Catholic prayer except for the opening invocation. The difference is made clear within the first few lines of Scott's poem:

"Ave Maria! maiden mild!
Listen to a maiden's prayer!
Thou canst hear though from the wild,
Thou canst save amid despair."

It is not until you read or listen to what Schubert originally intended for the song that you realize just how hard somebody worked to cram the Latin words to the music: The Bach-Gounod version pretty much uses the Ave Maria prayer verbatim, with the exception of a few repeated words; Schubert's, on the other hand, repeats one phrase after another in an attempt to stretch the sparse words throughout the music. During the second verse for example, the singer constantly reiterates the desire for the Madonna's prayers by singing:

It is unclear how and when Ellens dritter Gesang was changed into being just another musical setting for the Latin Ave Maria. As a whole, Schubert’s Opus 52 was never overly popular – with the exception of the Ave Maria. Most likely the words were changed to Latin in an attempt to disassociate the song from the rest of the cycle.

Individually, Schubert's Ave Maria has been cataloged as D. 839. There are times, during concerts and such, when it's source is listed as being from Scott's Lady of the Lake. However, if the lyrics are sung in Latin, it is debatable whether or not this credit is due.