What is your favorite Science Fiction film? Is it new, old, or ancient (perhaps from the silent film days)?

Is your favorite the Robert Wise 1951 classic, The Day The Earth Stood Still, with Michael Rennie (Klaatu), Sam Jaffee (the Scientist), Gort, and Patricia Neil -- or could it be the 2009 remake with Keanu Reeves as the alien visitor Klaatu and Jennifer Connelly as the Scientist? -- Gort the supposed servant-robot is still Gort, only bigger in 2009. In both films, Gort seems to be a helper and a servant of sorts, or even a tool for Klaatu to use.

Gort is famous. Today, a full size replica of the 1951 Gort is part of a permanent exhibit at Paul Allen's Science Fiction Museum and Hall of Fame in Seattle, Washington. He stands with the robot from TV's Lost In Space and other iconic TV and film sci-fi elements, like Captain Kirk's command chair from the NCC-1701.

Audiences love this film from the Golden Age of Science Fiction. The premise is well known and much copied: a friendly alien appears on Earth to save the planet's populations from themselves and their imminent path of destruction. This is the direct opposite of another beloved science fiction tale, To Serve Man, by Robert Heinlein. Aliens have often been portrayed as either saviors or killers, but never ordinary; and, robots are often involved with them. Sometimes the aliens are robots.

Who's In Charge Here?

A short story called Farewell To the Master by Harry Bates was released in 1940, before World War II. Even before that time, the first science fiction/futurist clubs and conventions were occurring - about 1935 was the beginning, according to Forest J. Ackerman, whom I heard speak about sci-fi history at a more recent convention.

Thoughts of traveling to the Moon and Mars had already affected people all the way back to the late 1800s and Science Fiction clubs and conventions were a natural outgrowth of these thoughts and dreams. People wanted to leave Earth to see what is "out there." So much mystery and such good stories about the moon were produced through the 1950s.

Our landing on the Luna and Mars almost ruined some of the magic we had enjoyed by finding dust and natural resources and not much else. Readers wanted Ray Bradbury's The Martian Chronicles to be true.Perhaps this desire is from where conspiracy theories about old moon bases grow.

Farewell To the Master focused on a robot in 1940, but a robot appeared on film in the silent movie Metropolis. Other movie robots followed before Harry Bates's robot appeared on screen. They were all controlled by people.

Some of the most profound work in early robotics - automatons - was conducted by the filmmaker Georges Méliès (1861 - 1938), who is featured in the film Hugo as Papa Georges. Much of Méliès's original film work was melted down to make heels for shoes during tough economic times, but a little of it remained for future filmmakers to see and for one of them, Martin Scorsese, to make Hugo.

In the 1951 film The Day the Earth Stood Still, Gort the robot is really a being with immense powers, which we see as he is able to bring Klaatu back from the dead after Americans shoot him. In the 1940 story, the emphasis on Gort's autonomy is even stronger. This is because in the short story, Klaatu is Gort's helper, not the reverse. I recommend seeing the original film and then reading the story afterward. 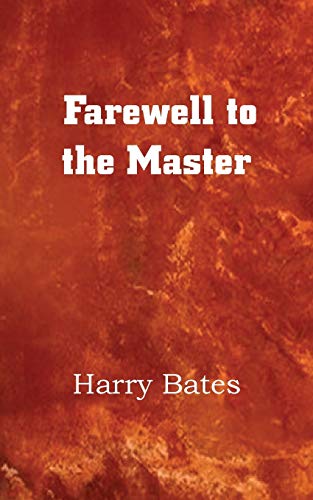 Farewell to the Master
Published in 1940, this story with a twist in the ending became The Day the Earth Stood Still in 1951 and 2008.
Buy Now

Bates was born in 1900 and right away began working in pulp fiction in the early 1920s. He became an editor of publications once called dime novels that became full fledged modern literary magazines of the sci-fi kind.

Mr. Bates demanded higher quality work once the other dime novel companies began to copy Amazing Stories, but he also paid higher rates for the better work. The company still went bankrupt in 1933, even though their publications were very good. Bates had written under pen names and was published in the magazine Astounding Science Fiction that was edited by the famous John W. Campbell during the Golden Age of the genre.

However, from 1933 to 1981, Bates led a secretive life about which no one knew. Many science fiction conventions hold panel discussions on great futurist writers of this period and many speculate in workshops on what Bates did with his last 48 years. It reminds me of Harper Lee, who just never published another book after To Kill A Mockingbird (until 2015).

Some Memorable Quotes from the 1951 Film

Klaatu: The universe grows smaller every day, and the threat of aggression by any group, anywhere, can no longer be tolerated. There must be security for all, or no one is secure.

Klaatu: I'm impatient with stupidity. My people have learned to live without it.

I am fearful when I see people substituting fear for reason.