Boldly to go beyond

We are now three years into the crew of the Enterprise’s five-year mission to explore new worlds, seek out new worlds and to boldly go where no man has gone before. The Federation’s flagship starship is now at the furthest reaches of charted space , where it encounters a mysterious new threat that puts the entirety of the federation in jeopardy. The Starship is out on the periphery, and the crew is weary from being out in space for far too long. They need some well-deserved R&R, and are going to take it on the Starbase Yorktown. While there, Kirk (Pine) discusses a promotion with the Vice Admiral of Yorktown, and Commander Spock(Quinto) — who is also contemplating leaving the Enterprise — learns of the death of Ambassador Spock (Nimoy).

Danger at Every Turn

However, the crew’s short-lived shore leave is interrupted when an unidentified ship approaches the Yorktown. The individual on the ship Kalara (Lydia Wilson) informs them of her stranded crew just beyond a nebula and seeks help. Rising to the occasion (as usual) Kirk recalls his crew, and they head out into the nebula. Unfortunately, virtually as soon as they make it to the other side of the nebula, they are attacked by a flight of two-man fighters that, quite literally, destroys the Enterprise (again), forcing the captain to call Abandon Ship, and the crew to flee in life pods.

Enterprise to the Rescue

Once the survivors of the crew are planet-side, they learn that the assault came from Krall (Elba), a lizard-like sentient who, succubus-like, derives his life energy by absorbing the very life out of his victims. Krall, as it turns out, is in need of an ancient and valuable artifact that’s aboard the remains of the crash-landed starship. Now, stranded in a rugged wilderness, Kirk, Spock (Zachary Quinto) and the rest of the crew must now battle not only an alien race but also locate a way off the hostile planet, so as to return to the Yorktown before Krall can carry out his attack on the ship.

The Enterprise in distress

Direction and Writing Shine Through

Directed by Fast and Furious director, Justin Lin who brought his frenetic style of directing to the film. Now we know that many folk were leery of this fast-cut, action-style for the traditionally more cerebral Trek franchise, but the film was co-written by Simon Pegg (who also plays Chief Montgomery Scott) is actually both thoughtful and character-driven (yes, in spite of the slam-bang action sequences). We get deeper into the character and motivations of the rest senior crew, learning more about what moves them through this life. Also worth noting is the respectful and loving way that the story deals with the real-life passing of Nimoy (and at the end is dedicated to both him and Anton Yelchin — who passed away after filming was completed).

Interestingly enough, the title of this film works on at least two levels. First, as far as the film itself goes, the ship is moving beyond known space (past the nebula) into previously uncharted areas); and secondly, it is the first of this new (J.J. Abrams) incarnation of Treks that “moves beyond” what has gone before. That is to say, in the first film, we met the new crew, learning their origins, even as the remains of the “original” (Roddenberry) universe died on screen. And in the second one was essentially a retelling of The Wrath of Kahn. This film is a new tale, not drawing inspiration on any of the previous (old) Trek stories, hence it is also moving “Beyond” the original series.

Forward into the Future

All-in-all, we were really impressed by this film, the writing, the acting, direction, and yes, the storyline all served to move not only the story, but the franchise forward, and as a First Generation Trekker, we see this as a good thing, and look forward to the cast, crew, and ship, continuing its mission to Boldly go… 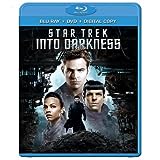 Star Trek Into Darkness (Blu-ray + DVD + Digital HD)
When the crew of the Enterprise is called back home, they find an unstoppable force of terror from within their own organization has detonated the fleet and everything it stands for, leaving our world in a state of crisis. With a personal score to settle, Captain Kirk leads a manhunt to a war-zone world to capture a one man weapon of mass destruction. As our heroes are propelled into an epic chess game of life and death, love will be challenged, friendships will be torn apart, and sacrifices must be made for the only family Kirk has left: his crew.
Buy Now