Softening the story blow for our readers

Welcome to our article 25. Massacre in Genzano di Lucania

Dear readers, this is the town I came from, so, I am sorry to say that a terrible thing has happened, which will make this town look, as if it is the wild American west. But people over there are good people; so, to show you what they are like over there and soften the shock that this story will bring you, I am going to show you first a few good things that happen in this town. Then we will tell you about the massacre that this madman caused in the town of Genzano.

The stage for the feast of the town Maddona

This is the Madonna statue that we take around Genzano town.

My heart cries in pain while I tell the story

Dear readers our hearts cry in pain, when we hear this terrible news that has happened in Genzano the town I came from. We want to think about the town we came from as a peaceful town, but there has been this nut that has upset everything, and at Christmas eve killed a few people, what a shock it has been, because we believe that Genzano the town I have come from is a peaceful religious town, as most of the towns of Southern Italy are; therefore, we as emigrant want to remember all those happy things that happen there, especially those religious events that the entire population seems to take part, I believe that those emigrant that for one reason and another have left their native town, they want to remember their town’s happy events and not this tragedy that has shocked everybody.

So, here we want to show our readers what we mean when we say that Genzano is a quiet religious town, because the most important events that everybody takes part are religious, there is very little else that would get the entire population of the town interested in a single event; one of this is Christmas of course, the other one for the people of Genzano is this feast of the Madonna that is celebrated for three days every year.

So, here I want to show you photos of this popular feast for two reasons; one is that it lessens the shock of the bad news that follows, the other is that we are not so bad in this town, and we the people that left this town, want to remember our town, when there is a feast and everybody is happy. Then we will talk about this tragedy, and the tragedies that have happened later.

Massacre in the town I came from

This year 2011 in Genzano di Lucania there won’t be any joy for Christmas, no matter which way you look at it, it does not look good. Christmas is supposed to be a peaceful and happy family gathering, and everybody should cherish the company of their friends and close relatives; but this year in Genzano di Lucania this will not happen, and if some people will be able to put aside what has just happened in Genzano will be a small minority.

Here are some links that show how the local media reported this crime, they are of course written in Italian as this is the native language of the place.

This is another crime photo

What has happened is shocking

Listen! My heart cries to hear this horrible news; you see this is the town that I came from, and I have always thought that nothing violent can happen it this friendly town where everybody knows everybody, so, to thinking of murdering people in this town was impossible until today, because today has happened something so horrendous that has changed everything, as a triple murder has happened, and it has happened on Christmas Eve, so, what sort of Christmas will the inhabitant of Genzano have this Christmas?

I am afraid to say, but this Christmas will be a very said one for the people of Genzano, just to think that one of their own has killed three people, it is incomprehensible one can only think and say that the killer has lost his mind, what else can it be?

The killer is 77 years old, that means that he is an old man and he should have known better. I must say that I have talked to the killer a couple of times when I was in Genzano about thirty years ago, he seemed all right then, but when I think about it I have always known that he was a man that would easily turn to violence; So, what sort of man is he one may ask?

He is a skinny man of average height very alert and sensitive, I know that he was restless even when he was a kid, and as the story goes he peeked up one of those unexploded petard too soon after it fell, but the petard exploded, so, he was wounded and became lame. He happened to do that because he belongs to a family that are specialized in firework, and that is why he happened to be there when that unexploded petard fell. Notwithstanding this incident he continued to work at the family fireworks factory, and this is what he has done most of his life, except when he migrated to Australia for a few years in the seventies. This is how I can describe this heartless killer, Ettore Bruscella.

You see I have migrated to Australia from this Genzano town when I was young, and I am still in Australia today, therefore, we are wondering today to which family the victim belong, there are too many Menchise families in this town, so, we wonder whether we can be related to them, there are no description on the Italian news for us old Italians to understand that, you see, we want to see written the names of the parents of the victims, so, that we could recall who they are, or a given name that some families have, or even where they lived in the town, or their farm possessions, just to give us a better idea who they are. So, we are wondering who they are.

Anyhow I am going to publish what I have written, and by doing that I will be informing my countryman what has happened, and I also hope that some of my countryman will let us know a few more details about this terrible event, so, we may learn the facts as they are.

Who are the victim’s relatives we wonder?

As I have said above, for lack of more detailed information, at this stage we don’t know who the victims are, even though we know their names, we don’t know to which family they belong, they can even be our relatives who know. For us that have been away from our native town of Genzano for 50 years or more, it is near impossible to figure out who the victims are, just by using what we have learned from the Italian news, but we would like to know anyhow, so, I and my wife who is also from Genzano have tried to assume to which family the victims could belong, so, at the moment we have assumed that the victims may indeed be some distant relatives, I am saying distant as they may fall in that category when we start thinking that we are not related anymore because the link is too far back.

Although I am a Menchise, I believe that they are not related to me because of this name, but they could be related to me in a different way. For instance, I assume that the victims could be related to me in this way on my mother side, starting from me and working my way back I can see; me, my mother, my grandma and my grandma parents Ceruzzi, from here I can go forward to the present generation of the victims. So, from my grandma parents Ceruzzi who had a large extended family including my great uncle Leonardo who had I believe a son Gerardo who once was vice mayor in the town of Genzano in the fifties and a daughter Marietta who married a Menchise and had a family including Leonardo Menchise who is the husband and father of the victims, this is what we believe they are. I wonder how close we are to the truth.

Our next sub-article is about another murder in this very quiet town of Southern Italy that happened about six months after the story above. The following map that we have downloaded from Google is to show that Genzano di Lucania is far from the sea, and the question here is how and why some refugees from Africa ended up in Genzano, and murdered this 75 years old woman.

This is where is Genzano di Lucania is 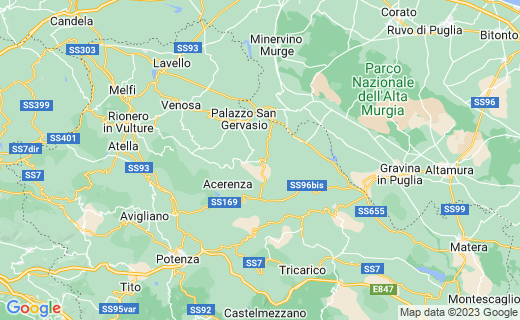 One more shock for Genzano town.

What we have written above took place in December 2011 and that was really shocking, but for Genzano di Lucania that quiet town in Southern Italy the troubles are not yet over, as there is another murder in June 2012.

An old lady aged 75 was found dead from one of her relatives, who was wondering why she did not return to Rome, when she had rung them and said that she was returning, anyhow this person went in her house and found her dead.

This is what was reported from the Italian and local media, unfortunately these reports are written in Italian, anyhow these are the links: ( quanto scrive La Gazzetta del Mezzogiorno)

(Update (28/06/2012) - È stato fermato dai carabinieri) Stopped by the Carabinieri (Carabinieri is the old way the police were called when there was the monarchy in Italy, today the monarchy is gone but the name remains for this type of police force.)

Anyhow, the police have stopped this Tunisian, who is the prime suspect and he was living near the house of said old lady murdered and he was about to move or run away from Genzano. Check the link below:

The reasons for this murder are not yet known, but this is another horrible murder, as she was raped and violently beaten causing death, perhaps it was a robbery gone wrong for a start, but who knows?

At this point of time one should question some other reason why this has happened, since the murder is this Tunisian that broke free from the prison during the civil war in Tunisia and Libya. One should ask whether it is wise to allow all these refugees freedom on the Italian soil, and whether they should be restricted. Until the authorities make sure that they are refugees that the war has forced them to flee their country of origin.

Today having come back to this article for my own reasons, it made me remember this last murder above that this Tunisian did, and thinking about Tunisians, I believe that the terrorist in Germany is a Tunisian. I believe that we should learn how not to trust these people, it is the only safe way.

Anyhow, this is all we are going to write in this article for the time being, until something else comes up about, Genzano di Lucania murderous happenings, or something that can be reported in an article like this. So now, let us go back to talk about Genzano history. We are going to talk about, The Norman castle of Monteserico.

Some links to other blogs