The Bad Boys of Star Wars-Anakin Skywalker to Darth Sidious

The universal theme behind the Star Wars movies is good vs evil. This classic theme has given us a delightful love/hate relationship with some memorable bad boys. In Episodes I through III, we watch young Anakin Skywalker fight and ultimately lose his battle with the Dark Side. As Anakin sinks, so does Chancellor Palpatine; turning slowly into the evil Darth Sidious and Anakin's guide into the Dark Side.

Discovered on Tatooine as a child slave, Qui-Gon Ginn sensed a strong presence of the Force in the young Anakin Skywalker. Believing he was the chosen one, Qui-Gon brought Anakin to the Jedi council to ask permission to train him. After some reluctance, caused by the dark cloud which seemed to hang over the boy, the council agreed to let Anakin become Obi Wan Kenobi's Padawan.

The inability to free his mother; she was left behind on Tatooine and eventually died a the hands of Tuskin Raiders, haunted Anakin and helped lead to his downfall. As Anakin reached early adulthood, he was plagued by dreams of a dark and violent future and his friendship with Obi Wan was often tested by his reckless nature and need for adventure. Anakin's recklessness was a concern to the members of the Jedi Council and they feared the young man's power was growing too strong to control.

Anakin's revenge on the Tuskin camp; killing every living member of the group, was the first sign of what his future might hold. It was the mentor-ship he found with Chancellor Palpatine that set Anakin's path to the Dark Side. Under Palpatine's spell, Anakin was convinced that the only way to save his wife, Padme, was to embrace the powers of the Sith. His help in the death of Mace Windu, was the final act that led to Anakin pledging himself to the Sith Lord. Chancellor Palpatine also known as Darth Sidious gave Anakin his new Sith name, Darth Vader. Anakin's final battle with Obi Wan, left him seriously injured, requiring cybernetic enhancements to sustain his life, thus transforming him into the Darth Vader we were first introduced to in Episode IV: A New Hope.

The Fall of Anakin Skywalker

"You were the Chosen One! It was said that you would destroy the Sith, not join them! Bring balance to the Force, not leave it in darkness!" ―Obi-Wan Kenobi to Darth Vader

After his reconstruction, Anakin assumed his new identity as Darth Vader and quickly became the self-proclaimed Emperor Palpatine's, right-hand man. He hunted down and destroyed the remainder of the Jedis. When Obi Wan came out of hiding to face his former student, he was killed by Vader in a lightsaber battle.

When Palpatine ordered Vader to find the son of Skywalker and turn him to the dark side, he used Luke's friends as bait to lure him in. When Luke refused to be turned to the evil side of the Force, Vader was forced into a lightsaber battle with him. After cutting off Luke's hand, Vader confessed that he was Luke's father. But his plans to rule the galaxy with his son by his side, were dashed, when Luke escaped.

During a second battle with Luke, Vader nearly lost his life. When Palpatine unleashed his power on Luke, Vader attacked the Emperor and threw him down a bottomless shaft, but in the process he was mortally wounded.

During his final minutes of life, with Luke at his side, the evil Darth Vader became Anakin once more. 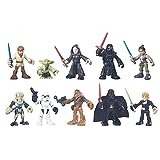 We were first introduced to Darth Sidious in Episode V The Empire Strikes Back. He is mentioned in Episode IV: A New Hope and identified as the Emperor, but he is not seen or given a name. When he does show up, it is in a hologram. He has come to warn Darth Vader of a "great disturbance in the force". This disturbance is of course, young Luke Skywalker.

If you take the movies in chronological order, then we are introduced to Chancellor Palpatine in Episode I: The Phantom Menace. Though outwardly, he plays a public servant, loyal to the Republic, his evil intentions soon become apparent. He is responsible for the downfall of Anakin and the destruction of the Jedi order. He causes the fall of the Republic and tries to replace it with a new totalitarian regime called the Galactic Empire. With Darth Vader at his side, he builds the Death Star and tries to turn Luke to the dark side. He meets his end at the hands of Darth Vader, who chooses his son over the dark side.

Even though Darth Maul is only in one movie, Episode I: The Phantom Menace, he leaves a lasting impression.  As Darth Sidious' apprentice he is sent to capture Queen Amidala and kill Qui-Gon Ginn and Obi-Wan Kenobi.  Though he is unsuccessful, he manages to kill Qui-Gon before being cut in half by Obi-Wan's lightsaber.

A clone of Janga Fett, and raised as his son, Boba grows up to be a ruthless bounty hunter without loyalty to any one cause.  In The Empire Fights Back, Fett is hired by Darth Vader to find the Millennium Falcon and all those aboard. When Vadar tortures and seals Han Solo in a carbon freezing unit, Fett confronts him about Han's survival, because he wants to turn a living Han over to Jabba the Hutt for a bounty.

In Return of the Jedi, Boba Fett goes to Jabba Fett's barge where Han, Luke and Chubacca are to be executed by being tossed into the Sarlacc pit.  During an escape attempt, Fett is accidentally killed when his rocket pack is activated by a blind Han.  Fett falls into the hungry jaws of the Sarlacc.

“Fear is the path to the Dark Side. Fear leads to anger, anger leads to hate, hate leads to suffering.” Yoda, Star Wars Episode I: The Phantom Menace

First mentioned in A New Hope , Jabba is given the reputation as a gangster with ruthless intentions and an entourage of bounty hunters, assassins and smugglers.  Jabba has place a bounty on Han Solo to regain the revenue lost when Solo dumped the illegal cargo he was carrying for him. In Return of the Jedi, he has captured Princess Leia and forced her to be his slave.  He also attempted to kill Luke, Han and Chewbacca by throwing them into the Sarlacc Pit.  Jabba meets his end at the hands of Princess Leia who strangles him with the chains that enslave her.

Who is your favorite Bad Boy?

The Authentic Costumes of Star Wars

Jedi Knights are spiritual warriors and the peace keepers of the galaxy. Trained in the use of the Force, they act as ambassadors performing judicial and diplomatic missions of peace between the planets.  They are the last defense against the evil forces from the dark side.

An in depth review of the first movie in the original trilogy.

The Original Conception of the Star Wars Trilogy

What we see on the screen isn't exactly what George Luca had in mind.