The first performance of The Beatles LOVE by Cirque de Soleil was in 2006. I only discovered it this week, thanks to ProCW. The point is, it's new and exciting to me! Hence, I've written it as though it's being performed for the first time because for me, it might as well be.

*** Update - The Beatles LOVE by Cirque de Soleil trailers have been removed from YouTube, so are no longer available.  Sorry, I removed them.

Throughout the year 2009, a magical event is taking place in Las Vegas. An international cast of sixty have gathered to perform at the Mirage Hotel. They are members of the famed Cirque de Soleil and through the creative use of extreme sports, dancing, and trapeze work, they are honouring the music of my boys - The Beatles.

From what I can tell from the Cirque du Soleil and Mirage Hotel websites, as well as from all the videos that have been made, The Beatles LOVE promises to be an incredible, super high energy show. I don't think anyone will fall asleep! The non-stop action and colours alone are guaranteed to make it a memorable event. And then, of course, there's the music.

History in the Making

The Beatles LOVE by Cirque du Soleil represents the first time that the Fab Four's music has ever been used in a show.

"Cirque du Soleil is also overpoweringly moving. For it achieves the apparently impossible, allowing you to hear the Beatles with fresh ears.

Just knowing that The Beatles' music is being showcased so creatively is heartwarming enough, but it gets even better. The survivoring members of the Fab Four are involved! Paul and Ringo are in several of the videos in this hub, talking about the remixing of their original music, which was done by none other than Sir George Martin.

For those who don't know, Sir George produced The Beatles' original songs back in the sixties, when girls screamed and fainted over the Boys and their music. This time around, his son, Giles, worked at his side. The father and son team did such an excellent job, that they won awards for their work on the project.

When you're that good, does winning awards become tedious?

It's not really surprising that Sir George and Giles won awards for remastering The Beatles' songs. No one knows the Fab Four's music more or better than George Martin does. That's one of the reasons that he was asked to participate in The Beatles LOVE project.

To start the process of creating the music, the original reels of tape were removed from the vaults at The Abbey Road Studios. It was from these uncatalogued recordings that the Martin's drew their raw material and inspiration. Lyrics were taken from one song, strings from another, drum bits from here, a bass line from there. In the end, 26 songs were gleaned from 130 original recordings of beautiful music that was mixed up and presented as the same music interpreted in a different beautiful way. Whew! It took a couple of years, but the result was a flowing 78 minutes of modern perfection. After that, the Cirque de Soleil performers then had to illustrate their passion for the music with their bodies.

The project arose from discussions in 2000[1] between George Harrison and his friend Guy Laliberté, one of Cirque's founders. Three years of negotiations between surviving members of The Beatles, Sir Paul McCartney and Ringo Starr, The Beatles widows Olivia Harrison (representing George Harrison) and Yoko Ono (representing John Lennon), The Beatles' holding company Apple Corps Ltd. and the MGM Mirage culminated in an agreement. 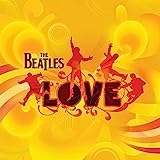 The highly energetic and talented cast is a culmination of separately hired acrobats, dancers and extreme sports people. Each plays a character part in putting energy and motion to the remastered music.

* Rehearsals took place in Montreal, and lasted eleven months before the premiere opening in Las Vegas.

The Beatles LOVE is performed exclusively in a custom designed theatre at the Mirage Hotel in Las Vegas, Nevada. It was built for this show and is appropriately named, the Love Theatre.

There are 6,341 speakers in the Love Theatre. Each of the 2,013 seats are fitted with three, two of which are in the headrest. The sound is said to be of unbelievable quality.

The stage is centrally located, surrounded by the seating.

High definition projectors handle the enormous images that are shown on the walls and four translucent screens. A visual extravaganza!

And In The End

The Beatles LOVE by Cirque de Soleil promises to be an awe inspiring, magnificent culmination of talents and artistry. It is making history. Never before have The Beatles allowed their music to be remixed and used in this manner.

Personally, I find it very exciting to know that they have collaborated, once again, with Sir George Martin. It feels to me like the old days, but with a new twist.

Funny, it never occured to me when I was watching The Beatles for the first time on The Ed Sullivan Show in 1964, that I would still be watching them all these decades later. I loved them then and I love them now. It's good to be a Beatlemaniac.

Happy Valentine's Day to my Boys!  With LOVE, of course.

The videos below are all one documentary on the making of The Beatles LOVE by Cirque du Soleil. Each video leads to next.

2The Beatles LOVE by Cirque du Soleil - The Director/Writer's Vision