Sue is a mother and grandmother living in sunny Malaysia. Like many Malaysians, she is passionate about food.

The Bee Gees has enjoyed musical success the last 50 years, first as a pop act and later in the disco music era. They have sold more than 220 million records worldwide and countless artists have sung their songs.

The Bee Gees are still one of my favorite singing groups today. Their songs were the hits of the day during my teenage years. When they were on a world tour and came to my part of the world, my friends and I made sure we were there for their concert. It was a fantastic evening to watch them perform live all my favorite songs.

It is a thrill to share with you their music for the past fifty years. Take a trip along with me to see how the Bee Gees first got started and their great songs .

The Gibb Brothers Are The Bee Gees

The three Gibb brothers, Maurice, Robin and Barry form the Bee Gees. Born in the Isle of Man, the Gibb brothers moved to Australia in the mid-1950s where they began their musical careers. After their chart success in Australia they moved back to the United Kingdom where they became a successful singing band.

The Bee Gees had two periods of enormous success: as a soft rock act in the 1960s and early 1970s and the disco music of the 1970s. The group sang in three part harmony with Robin in his distinctive vibrato lead in their earlier songs while Barry's R&B falsetto was featured in their disco songs. The three brothers wrote most of their own hits and also wrote and produced songs for other well known artists.

The Bee Gees Are The Gibb Brothers

Bee Gees Early Hits - How Can You Mend A Broken Heart

Barry Gibb is a singer, song writer and producer. He sang and played the guitar when the brothers performed as the Bee Gees. When his brother Robin left the group to pursue a solo career, Barry and his brother Maurice continued to keep the Bee Gees alive as a group.

In the 1970's Robin rejoined the group and the Bee Gees enjoyed a second wave of success with the dawn of the disco era. Barry now sang in his high pitched falsetto voice which now became their signature sound. Barry and his brothers wrote songs not only for the Bee Gees but also wrote and produced major hits for artists like Kenny Rogers, Barbara Streisand, Celine Dion and Dolly Parton.

Robin Gibb - Lead singer for the Bee Gees in the 1960s

Robin Gibb was the older twin brother to Maurice Gibb. He was the lead singer for the group in the first period of success in the 1960s with his trademark vibrato voice. He went solo for a while and enjoyed some initial success with "Saved By The Bell." There were also rumors of drug problems. He did not find a solo career as satisfying and eventually reunited with his brothers for the second period of the Bee Gees success in the 19 70s.

Robin Gibb passed away on May 2012. He requested the song " How Deep is Your Love " to be played at his funeral.

Part of the sound track of "Saturday Night Fever" this song is the most popular composition with 400 versions by other artists.

Robin Gibb - I've Got To Get A Message To You

Maurice was the younger twin brother to Robin. He was briefly married to the Scottish pop singer, Lulu. He later married again and had two children with his wife, Yvonne.

Maurice was the musical director of the group, focusing on melody and arrangement. He sang harmony and backing vocals and also played a variety of instruments. In their song writing collaboration, Maurice contributed mainly to melody while his brothers wrote the lyrics. His reputation as a mild mannered person helped to provide a stabilizing influence to his two brothers.

In January 2003, Maurice died at the age of 53 from a heart attack. Later in February 2003, the Bee Gees received the Grammy Legend Award. The surviving brothers, Robin and Barry decided to retire the group name Bee Gees leaving it to represent the three brothers together. They continue to work independently and having released recordings with various artists.

Saturday Night Fever, the movie and original sound track by the Bee Gees helped to popularize the disco craze around the world and made John Travolta a household name. Who could forget his fantastic disco moves!

This movie sound track was a turning point in the career of the Bee Gees. The movie and the music grew enormously in popularity in the USA and the rest of the world. In 1978, the song won for Best Performance By A Group. In 1979, the album won two Grammys, Album Of The Year And Producer Of The Year as well as Favorite Pop/ R&B Album at The American Music Awards.

Bee Gees - Too Much Heaven - Earned over $11 million for UNICEF

In November 1997, the Bee Gees performed a live concert in Las Vegas called "One Night Only". The CD of the performance sold over 5 million copies and led to a world tour of "One Night Only" concerts.

2500 artists have recorded their songs

The brothers were also successful song writers and producers with several hits for various artists. In 1982, Dionne Warwick made a comeback with "Heartbreaker". The following year Dolly Parton and Kenny Rogers recorded US#1 hit "Islands In The Stream". Diana Ross also had a # 1 UK hit with "Chain Reaction". Barbara Streisand recorded her album, "Guilty" with the help of Barry Gibb while her single "Woman In Love" was written by the three brothers.

The Bee Gees have sold more than 205 million records and singles worldwide. Their most popular composition is "How Deep Is Your Love" with 400 versions by other artists.

Other artists who have songs written by the Bee Gees include "If I Can't Have You " by Yvonne Elliman, "Chain Reaction" by Diana Ross, "Emotion " by Samantha Sang and Destiny's Child, "Immortality" by Celine Dion, "Spicks And Specks" by Status Quo, "Grease" by Frankie Valli, "Rest Your Love On Me" by Conway Twitty and many more.

Written by the Gibb brothers with their distinctive vocals in the chorus.

Dionne Warwick admitted she was not fond of the "Heartbreaker" but recorded it because she trusted the Bee Gees' judgement that it would be a great hit. The song was a smash hit around the world.

Composed by Barry, Robin and Maurice especially for Celine Dion. Immortality is from Celine Dion's album "Let' Talk About Love". The Bee Gees can be heard on the background vocals.

The Bee Gees celebrate their 50th anniversary in music with 2 albums, "The Ultimate Bee Gees" and "Mythology". 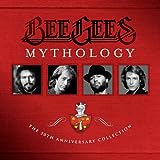 Mythology
The package contain 4 discs, each spotlighting a different Gibb brother including one dedicated to their younger brother, Andy Gibb who sang solo and who died in 1988 at the age of 30. Comes with a 60 page booklet with personal photographs and notes penned by the band themselves as well as tributes from other artists.
Buy Now