There is an abundance of great Halloween films - that can't be said for every holiday or special occasion. I can't think of a ton of really good Thanksgiving movies . . . not a lot of birthday or anniversary movies. Halloween is fortunate to share mood and imagery with one of the more profitable movie genres - monster/horror films. Easter, for instance, doesn't benefit from so popular a movie form - the relentless returning to life of Dracula and Jason isn't at all the same thing as the recounting of an actual historic event that changed the course of history.

Young Frankie Scarlatti on his way to the Halloween celebration at school - and an adventure he could never have imagined.

But amongst all the vampires and supernaturally unable to die butchers is this little masterpiece - "Lady In White". One reason for the 'masterpiece' accolade is the film's seamless blending of a variety of flavors of story. When some films try to cover too much, try to be 'real' by including humor and drama and chills and cultural commentary, etc, they end up missing the mark on all of it . . . they should have concentrated their efforts on the chills or the comedy or whatever.

But "Lady In White" accomplishes just what I suggested those films that fail are attempting - the charm of the small town, the warmth of a loving family,the humor young boys delight in, the supernatural eeriness, the portrayal of racial injustice, and the edge of your seat thrills all come together in a natural way to present people you care about and situations you are caught-up in.

The film is enjoyable, and enjoyable for the whole family, in it's humor, it's eeriness, it's brotherly mischief, it's genuine terror, and in it's nostalgic family life with grandma making dinner and dad working at the family business.

And, don't misunderstand - I think "Texas Chainsaw Massacre" is a masterpiece of creepiness, the first "Halloween" a brilliant nightmare, and I'm a fan of such overlooked horror greats as "Shock Waves" and "The Sentimental". I'm not offering "Lady In White" as a family-friendly scary film - I'm suggesting "Lady In White" as a genuinely scary film that is done so well the whole family can appreciate it's cinematic storytelling. I don't ever look for or recommend movies that are merely 'safe' for kids or families - I want good, provocative, and inspired films.

Brothers out late at night, trying to solve a mystery - can't believe what they're seeing

However, recommending this for the whole family to enjoy, I must caution you; the storyline surrounds a series of child abduction/murders that have plagued a small community for years. But that circumstance is treated realistically . . . it's not a tale of some otherworldly evil that the viewer gets to watch slash one teenager after another to pieces - this follows a young boy as he has revealed to him a clue to the identity of a man, a real man, who has not been caught yet. This makes the suspense even more taut and the danger very real . . . the movie provides authentic edge-of-your-seat moments. 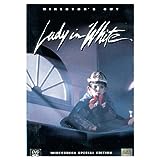 Please do visit my other hubs ~

The Christian & Private Study - A 'How To' Guide

Preface ~ "The Premise And Definitions"

"Leonard - The Best Dog Ever"

Grampa and just a few of the grandsons