As a kid I was always interested by the stories I would read in magazines about the mythical creature known as Loch Ness Monster. I always believed as a young kid that nothing is impossible. How vast the sea is having animals living in the deep blue isn't so far fetched especially sea creatures we've never fully discovered. Like the Goblin Shark, although its been discovered it lives in such deep waters that little is known about them but we know they exist.

In our society today most believe if you can't see it then it doesn't exist, but how selfish is that thought because our earth shares only 30% of land and 70% of water, imagine even on the land we discover new animals so how could it not be possible for something we don't know and don't see to exist? There is more of the water we haven't explored then there is land. So keep an open mind.

Reputation has it that the Loch Ness monster inhabits the Scotland Highlands, This creatue has been mostly spotted in the Loch Ness but has also been seen in the River Ness and the road near the Loch Ness. The creature also known as Nessie to the locals in Scotland Highlands and near by locations gathered attention by the world in 1933 and they haven't stopped talking about it since. Believers think that Nessie comes from a long line of Plesiocaurs, a Dinosaur from the Jurassic Period. The loch Nes Monste got it's nickname Nessie in the 1940s and it has stuck with him ever since. Although Nessie first got the attention from the world in 1933 it has been said that sightings of the creature date back as far as the 6th century. Other names have been giving to the creature such as "Sea Serpent", "Monster Fish" and "Dragon but no other name stuck like the name Nessie.

On December 6th 1933 the first photograph of Loch Ness Monster was taken by Hugh Gray, it was then published but the photo was so distorted that there was little evidence the picture was really of Nessie. Hugh claims to have have seen the Nessie one day after leaving church and walking along the Loch he first just spotted an uncommon object emerging from the water, until it became a large creature, Gray took several pictures of the creature and none of them came out clear enough, The only one that came out clear enough was the one Published Skeptics believe it was just a dog swimming with a stick in his mouth.

What do you believe in?

Do you believe in the Loch Ness Monster?

Saint Columbia was staying in the land of Picts with his companion when he came across some locals burying a man by the River Ness The locals said that their friend was swimming in the River Ness when he was attacked by the "Water Beast" It mauled him and drag him under. The locals said they tried to rescue him but only where able to drag his dead body out of the water.

Because of this story Saint Columbia was said to have swim the river himself to face the creature himself. As he was swimming he claims to have been chased by the creature. St. Columbia made a cross with his fingers to ward off the creature and the creature was then scared or so it seemed and left without a trace.

On July 22, 1933, George Spicer and his wife where driving in their car when the claim to have seen the monster in the road. They describe seeing a 4 foot high and 25 feet long creature with a narrow neck slightly thicker then of an elephants trunk. The neck was claimed to be 10 to 12 feet long. In lurched across the road towards the Loch about 20 yards away leaving only a trail of broken undergrowth in it's wake.

in August of 1933, Motorcyclist Claim to have almost ran into the creature on the road about 1 am on a moonlight night. the creature was described as having a small head and a long body crossing the road towards the Loch

Following the building of the road in 1933 sightings of the creature continued as tourist and workmen claimed, these sightings increased until 1963. Once the road was a high traffic its now an isolated area to the Highlands of Scotland

C.B. Farrel was distracted from his duties one night while working as a royal reserve corps on his boat by a large eyed creature with fins and 20 to 30 foot long body. The neck was 4 to 5 feet long protruded out of the water.

In December of 1954 a solar contact was made by a fishing boat named Rival the third, The crew observed solar readings of a large object keeping pace with the boat at 480 feet deep. Traveling half a mile in this manner. The contact was later lost then returned once more. This was the only solar report of this size and this manner. No other sightings before or after have been reported.

The water horse: Legend of the deep (Trailer)

Video's have been recorded, pictures have been taken of this creature but nothing that has any concrete evidence that this Loch Ness moster exist. Still people report seeing the beast through their travels while either living in Scotland or just visiting This legend has been claimed to be true by the locals and the tourist are curious to know if the Loch ness is real We may never know. Some claim that this creature is a blood thirsty human eating creature that lives in the waters of Scotland stalking and waiting for its prey. Weather its true on not I like to believe that this creatures not only a solitary creature with little to no other relative a live but with it's long neck and the behavior witnessed by others, he must be a vegetarian. A meat eater wouldn't stay uncovered and undiscovered this long. There are only so many fish in the sea. If this blood thirsty creature existed we would know. But then again maybe not.

The Loch Ness is a large deep freshwater Loch in the Scotland Highlands extending approximately 23 miles southwest of Inverness, It's surface in 52 feet above sea level. With this in mind and the body size of the Loch Ness Monster you make your on conclusion for the possibility of a creature of that size living in a lake of this size. Also try reading some of the books below if you plan of visiting Scotland or you are just curious about the legend. Thank you for reading my Hub

Another book on Nessie 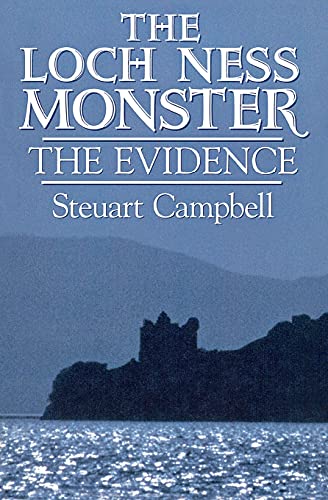