The Contributions of the Moody Blues

The Moody Blues debited their act in 1964 and they have toured longer than almost any other band in the history of music. The band was founded in when Michael Pinder, Graeme Edge, and Ray Thomas decided to form a band with Denny Laine. John Lodge nearly became one of the original Moody Blues, but he decided to finish college and Clint Warwick was chosen as bassist. The band was originally a rhythm and blues ensemble that wore blue suits at their performances. "Go Now" was the first hit of the band, featuring Denny Laine's somber and distinctive voice. In 1966 Clint Warwick and Denny Laine decided to leave the band, so John Lodge decided to join the band since he had just completed his engineering degree. The band placed an advertisement in The Melody Maker and Justin Hayward was the lucky man who got the job. Justin became the lead vocalist and guitarist of The Moody Blues, thus changing the direction and the shape of the band. 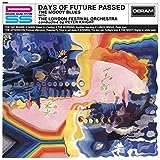 Nights In White Satin: Only Writers Can Think of Titles Like This!

When Justin joined the band the Moodies continued to perform their regular rhythm and blues songs without much success. One night a concert goer came back to the dressing room and the Moodies were excited and thought he wanted an autograph. However, he proceeding to tear the Moodies apart and told them that he had wasted his money taking his wife to their concert. From that point forward the Moodies decided they needed to only perform songs they wrote, which put the band on an entirely new path. Gradually the band gathered a niche following by only writing and performing their own material.

After the fall of Disco in the early eighties, few people realized that the Bee Gees were responsible for writing many famous songs for other performers. Unlike many bands who use other people's work, The Moody Blues have always wrote their own songs and perform what they truly believe in. Some of their critics accuse them of being bombastic, but at least we know the Moodies are who they are and not anyone else. Justin Hayward, the lead guitarist and singer, has mentioned in interviews that he admires other bands, such as Foo Fighters, who write write and perform their own songs. Justin Hayward penned one of the most famous song Nights In White Satin when he was only 19 and sitting on his bed one night. Hayward said this song was about the end of one great love affair and the beginning of another, but he also admits that the words truly only have meaning to him. In many interviews Hayward has said that songs come to him when he is just sitting around and playing with his guitar.

Mike Pinder was also a prolific writer for the Moodies and his songs tended to have more of a other worldly feel to them, such as Melancholy Man and The Voyage. Ray Thomas and John Lodge have also tried their hand at writing some songs that have gone on to be very famous. Ride My See-saw was one of the most famous songs for John, and Timoth Leary is Deadis one of the most famous songs written by Ray Thomas. Thomas joked in an interview that Timothy Leary said the song made him much more famous than he had ever wanted to be. Graeme Edge has written several poems that have been recited by Mike Pinder and himself on several of the Moodies albums, but for the most part he has played drums and not contributed to the writing process. Many people may love or hate The Moody Blues, but they are truly gifted men that always perform material they write and believe in.

Mike Pinder claims that The Moody Blues have changed their style since Michael Pinder left the band in 1978, which has resulted in the release of more poppy songs such as In Your Wildest Dreams, English Sunset, and I Know You Are Out There Somewhere. In 1974 the Moody Blues had taken a performing hiatus and each of the musicians recorded some of their own work. During this time period Mike Pinder moved to the United States and married a Californian woman. When the band reunited to record Octave in 1978, there was one disaster after another, resulting in Pinder not wanting to continue with the band. Pinder says he has no hard feelings and that he is sorry if he hurt Graeme Edge's feelings with a remark he once made, but Pinder has never reunited with the band. Pinder claims their style has become more poppy over the years, and we can see the difference in the pre and post Pinder songs. Pinder and the other Moodies are all great performers and gentlemen, so one can see it was more creative differences than overblown egos that created the split. The Moodies are one of the few bands that have weathered the loss of members as well as they did. The Moodies are magical to watch and I suggest you check out some of their music.

The Moody Blues have retained a popular fan base by touring in America. The Moodies enjoy touring and have remained true to their roots, and many people look forward to their concerts each year. They are the type of band that you can listen to on the radio, CD, or at a concert. Over forty years of touring and performing has proved that the Moody Blues have a wonderful track record and continue to have a large fan base. Hayward has always been known for his lead voice and guitar, but one can only truly have experienced The Moody Blues by hearing Ray's flute and John's bass in concert. Both of these men are tremendously talented and have shaped music in their own ways.

A Night at the Red Rocks concert was broadcasted on PBS back in 1992. This concert included The Moody Blues using the Colorado Symphony Orchestra, which allowed them to recreate many of the songs heard on earlier albums, such as Days of Future Past. This concert was so popular and resulted in the Moodies being asked to perform many other concerts with other orchestras in the United States. This lasted for about seven years, but the Moodies have returned to just performing on their own.

Ray Thomas left the band in 2002 because he wanted a break, and was replaced by Norda Mullen. Mullen is one of the most accomplished flutist in the rock business, and she is a joy to watch in concert. Thomas's deep tenor voice is deeply missed and no one will ever be able to perform Legend of a Band, but Mullen makes a beautiful and magical addition to the band.  Ray Thomas fans will be happy to know he has created a new website and is selling his remastered solo album From Might Oaks.

The Moody Blues are still going strong and have completed another tour here in the US and and have an upcoming tour in Britain and Europe this autumn. Here is a clip from The Moodies playing at Pechanga thanks to the wonderful fans posting at youtube. In June 2008 The Nights In White Satin-The Trip debuted at the Hard Rock Park at Mrytle Beach in South Carolina, which was a commemoration of this classic hit song. The Moody Blues have remained true to their roots by always writing songs they truly believe in and their hardcore fans will love them for this a hundred years after they play their final concert.