About two years ago, TC Electronic unleased the first batch of pedals in their TonePrint series. The idea behind this product line was to give users the ability to connect their gear to a computer via a USB cable and download software patches, which could then be loaded into a specific patch on the Type selector knob's radius. The marketing people seemed to think that utilizing settings programmed by pro players would attract users in droves.

It didn't quite work out that way, but the FlashBack delay sold quite well on the strength of a good design, great sounds and creative features. The ability to run the pedal in a stereo rig is helpful, and the inclusion of a different kind of tap tempo was, at the very least, innovative thinking. (More on that later.)

The pedal is very solid in terms of build, though the knobs feel a little flimsy when turned. the footswitch is excellent, not as stiff as some of the metal plungers you find on, say, EHX units, but still firm enough that you'd be pretty unlikely to accidentally turn the pedal on or off without a pretty good stomp. Its small size belies the vast array of features contained inside, and as a result, it's very easy to find room for on a pedal board.

The FlashBack delay incorporates a very simple user interface, which will be simple to navigate for users of any modern delay unit, to provide access to a huge number of sounds and functions.

The main things you'll want to know about are:

The "Type" knob also provides access to two additional features that are worth talking about.

Perhaps this feature wasn't as popular as TC Electronic had hoped, or the company received so much feedback from users that they couldn't ignore it--either way, this month, they released a free software download of the software used by the pros to create their own TonePrint modules. Now that is an innovative idea!

The FlashBack also features a 3-way toggle switch allowing a user to choose one of three subdivision values that result in different echo patterns. These include a straight quarter note, a dotted eighth note, and a third setting that produces both simultaneously.

Finally, the last major feature of the Flashback is the ability to set the tempo of the echoes without having to stoop down and adjust the Delay knob. This is activated by holding down the footswitch for 2 seconds, at which point the guitar signal is muted and the player can strum in the tempo they want in quarter notes. Lifting one's foot off the pedal will then un-mute the pedal, with the echoes falling in time with the player's strums. 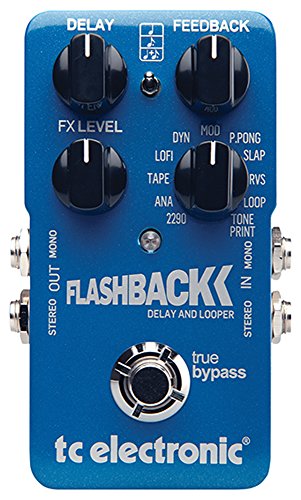 Though the FlashBack delay is actually very easy to access, many of the pedal's features are a mixed bag in terms of actual use.

First, it's worth noting that the sounds in this little blue box are great. The effects blend with a signal very well, allowing for the instant creation of lush atmospheres or just adding a little color to the sound of a wailing solo. However, I personally found the tones a little thin-sounding, compared to the rich analog tones of EHX's Digital Memory Boy or even the Line 6 Echo Park's tape echo model. The TC Electronic delay is, by comparison, remarkably clean but this comes at a cost to the character of the pedal.

Second, some of the pedal's innovations are a little clumsy. For instance, the idea of letting a player use their hands to set the tap tempo is a very good one considering that most guitarists spend a lot of energy working on their timing. It's likely that your strumming hand has better timing and control than either of your feet. However, having to hold down the FlashBack's footswitch for two full seconds to access the tap tempo is a real buzzkill. In a live performance situation, having your signal muted for as long as it takes to tap in a new tempo leaves a very noticeable gap in the mix. Also, while you are only required to hold the footswitch down for two seconds, this feels like an eternity onstage!

With that said, the Looper feature is one of the easiest to use of any I've ever encountered, although it does require that the player have pretty good foot-timing because there's no built-in quantization. The pedal starts recording the very instant you hit the footswitch, and starts playing as soon as you step on it again. However, with a little practice it's quite simple to get used to and before long, you'll be layering loops like a pro. My only qualm with the Looper is that one can't use a delay sound at the same time as looping, but this limitation is logical and not a deal-breaker.

The only feature I'll say I dislike outright on this pedal is the fact that the switch used to toggle trails on or off ("trails" referring to echoes continuing to occur after the pedal is turned off) is hidden in the pedal's chassis. To access it, you have to pick up the pedal and use a coin or some other large, flat implement to unscrew a panel on the reverse side of the FlashBack, inside of which you'll find an on/off switch. It seems to me that even mounting this as a toggle on the side of the pedal would have been a better idea than putting it under and inside of it.

When playing alone, the FlashBack is wonderful, providing plenty of creative inspiration (especially when using the looper and overdubbing layer upon layer of sounds). Also, the uber-clean sounds and relative ease of use make the FlashBack a great recording tool--it's exceptionally easy to capture accurate, detailed sounds through a microphone, even if the delay models are a little lacking in character. The only real issue with the FlashBack comes in terms of live performance, where accessing certain features on the fly can be a real challenge. If these weren't features that we guitarists have come to take for granted as standard on delay pedals, I probably wouldn't mind, but for any live band that plays without a metronome in their monitors, being able to adjust the tempo of one's echoes easily is a serious issue.

If HubPages allowed for fractions of stars in their Ratings capsule, I'd probably give the TC Electronic FlashBack a 3.5 or even a 3.8. It's really a very good pedal, but the aforementioned issues and the slightly sterile sounds detract from its usefulness.

Still, for the money, the FlashBack is a decent value. I probably wouldn't recommend it as a good point of entry for someone who is new to playing through echo pedals, but for an experienced delay user, there are enough features under the hood that it may appeal to those seeking advanced functionality. The availability of the TonePrint editing software gives this pedal a depth that really can't be found elsewhere on the market, even at much higher price points.

As an aside, it's worth noting that TC Electronic recently released their FlashBack X4 pedal, a much larger unit that features four footswitches that allow for dedicated tap tempo control, record/play/pause fucntionality for the looper, and the ability to store and access delay presets. It looks like this pedal was an attempt to address many of the issues with the original FlashBack, so one has to give TC Electronic credit for being a company that listens to user feedback and acts accordingly!