Hip Hop: The Great Below - Shua

The Great Below Review

The Great Below is the first album of a new musician on the rap scene named Shua who owns his own record label, Static Abyss Records For a first album, I can honestly say that it is phenomenal. The beats, the lyrics, the pacing, everything is excellent. I’m normally not a fan of rap in general, but Shua has become one of my top three rappers. What I like most about this artist is the fact that he doesn’t rap about getting women, money, and drugs. His music is much deeper and hits the right places to make you relate to his anger, depression, and frustrations. The Great Below has some collaborations with some very talented artists like Bipolar, Asa, and Bishop.

Containing fifteen tracks, The Great Below delivers some hard hitting sounds and dark lyrics. This isn’t exactly an album you want to play at a party to set a good mood. For those who like a bit of anger in their music though to get through some rough times, this may be for you. The titular song introduces the concept of the album that life isn’t always sunshine and fields of flowers. Unless you are living in a 1950’s sitcom, you’re going to get angry. You will have your heartbroken. Life is hard and can be unpleasant. This album can be very therapeutically in the same vein that listening to blues music can be.

“Without You”, the third track on the album (featuring the lovely Asa) deals with a difficult breakup. It reflects thoughts that men sometimes have with lyrics such as “was it because I was poor or that you’re a ****ing whore?” Is that really the only reasons women break up with their significant others? Of course not, but men aren’t entirely rational when put into an emotional state. It’s all part of the acceptance process, feeling that the other person has wronged you by ending the relationship and getting angry about it. It is the first song to have an official music video starring Shua and Asa.

Track twelve is titled “Hate Meets Evil” is a very dark song. The music itself is ominous and threatening, and the lyrics match. There is a lot of anger to the song, wishing harm against the people who have wronged Shua to the extreme. The hate is being combined with the inner demon and empowers it. It is very difficult to stay sane with this level of emotion, to control that anger. It ties in very well with “Madness,” track number fourteen. “She drove me, into madness crashed the car and took my last wish. She drove me into madness I think my last wish was to kill that *****!” Sometimes things just become too much for a person to handle.

A personal favorite of mine is track number two, “Behind the Mask.” The music itself is simple yet effective. It’s the type of song I can really identify with, wanting to just be yourself but hiding behind a mask and battling inner demons. The chorus, “When you look into these eyes, behind this mask you’ll see. Nothing but a broken man, my worst enemy,” can really resonate with people going through a rough patch in life. Whether it’s because the bills are piling up, you’re having trouble getting a job, or you’re going through a tough breakup, “Behind the Mask” hits home for a lot of us. It pulls you in right away with “I’m drowning, right? So someone throw me a lifesaver.” For people who are getting kicked around by life, sometimes you just want to listen to some music and know that there are other people who feel the way you do.

“Fascinate” is the fifth track and it almost seems to be the most upbeat song on the album, except the tone of Shua’s voice conveys a feeling of being dead inside. He raps about meeting a girl who lifted him out of his darkness but ends up leaving him for another. The demon mocks him, saying that if it can’t attack him directly, it will use others for its purposes. In the end, Shua is right back in that dark place. This song goes pretty well with “Without You” in that they’re a bit opposite in reactions. While “Without You” portrays a man who is very angry, “Fascinate” portrays someone who is just completely broken, almost resigned to his fate of being tormented by the demon and being trapped in the darkness forever.

“Reptile” (track nine) features Bipolar and the contrast between his and Shua’s voice make this track very interesting. Compared to Shua’s varying pitches and emotions, Bipolar has a very deep voice that doesn’t change much. He provides a stable presence to the track. Reptile can appeal to those who think they have found someone special only to find out that they just want your money. Bleeding you dry of your cash and leaving you feeling like you’ve been injected with something toxic, the Reptile is a dangerous creature for your wallet, your mental health, and perhaps your physical health. Reptile is the second track to have a music video associated with it, featuring Shua, Bipolar, and Celine Maniu.

Overall, The Great Below is fantastic, especially for a debut album. If you want to listen to radio style hip-hop about gangstas and material possessions, then Shua is not for you. If you want a deeper message and lyrics you can really connect with, definitely buy this album. Even if you’re not really a fan of hip-hop, I’d recommend you give some of the songs a listen, you might be surprised to see that you enjoy it. I give The Great Below 9/10 and look forward to future albums from Shua.

4 stars for The Great Below- Shua 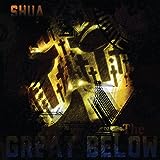