The Hobbit: An Unexpected Journey

Peter Jackson's latest foray into Middle Earth is an eagerly anticipated event. The Hobbit has large shoes to fill; The Lord of the Rings Trilogy was a sumptuous and massive success. The indications are that the first of the two Hobbit films will not disappoint; the first, An Unexpected Journey will be released in December 2012 and is already being talked about as one of the blockbusters of the year.

Since this article was originally written there has been a change; there will now be three, rather than two, films. Warner Bros agreed in the summer of 2012 to fund another film. This will be released as the second instalment. So, in December 2013 we can look forward to The Hobbit: The Destruction of Smaug and July 2014 will see the release of The Hobbit: There and Back Again. Originally, There and Back Again was to the second and final instalment.

Many fans of Lord of the Rings will have already scanned the cast list of The Hobbit. Some familiar faces from the Lord of the Rings will reprise their roles, some will sadly be missing. There will, of course, need to be a new star. The young Bilbo Baggins is to be played by British actor Martin Freeman, which seems an excellent choice. One name on the list does appear an odd casting decision: Richard Armitage as Thorin Oakenshield.

Richard Armitage as Guy of Gisbourne

Which Lord of the Rings Actors Will Appear in The Hobbit?

Several of the characters from Lord of the Rings appear in The Hobbit, so you can expect to see:

No Aragorn so sadly, no Viggo Mortensen!

Who is Richard Armitage?

Richard Armitage is a well-known television actor in the UK. He has appeared in numerous TV series during the last decade and, particularly in the last few years, has become a recognisable face. One of his first starring roles was in the popular comedy The Vicar of Dibley, in which he played Dawn French's love interest and long awaited husband.

In 2004 Armitage took the role of John Thornton in the BBC period drama North and South. The BBC had muted expectations of the show being successful and did little to promote it. When the show reached the screens it was a hit. In fact, the BBC's website message board crashed due to the number of hits it received. The focus of the messages? Richard Armitage's broody, emotionally taut performance. He earned an award as 'The Most Desirable Drama Star' due to his performance.

Armitage stayed in costume for his next role with the BBC in their Robin Hood series, playing the villainous Guy of Gisbourne. Again, his character was darkly menacing and established him as a heartthrob. Most recently Armitage has appeared on TV screens as Lucas North, the emotionally damaged spy, in Spooks (MI5 in the US). Once again, the character is dark and struggling with inner demons.

So, It isn't that Armitage has been cast in a leading role in a major film that perplexes me since he is a fine actor. What startles me is that to date his roles have played upon his tall, dark and handsome good looks, which on the face of it seems rather at odds with playing an arrogant, hairy dwarf. However, there is more to Thorin Oakenshield than pomposity and lack of stature. 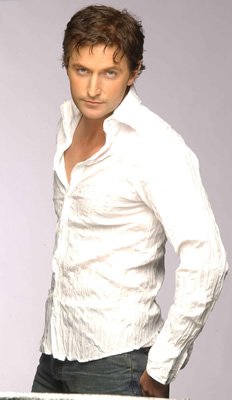 Thorin Oakenshield is not just any dwarf, he is a prince. His father was King Thrain II, and Thorin is haughty and pompous. He is also courageous and a great warrior, although he has a ruthless streak and can be self-serving. Like all dwarves, he has a love of gold that surpasses all else in his life. Indeed, his purpose in joining Bilbo is to steal back his family's treasures, stolen by Smaug the Dragon. However, Thorin is not just a warrior; he loves to sing and plays the harp.

A study of Thorin's character reveals that actually, he is not far removed from Richard Armitage's usual roles; physically strong, dynamic and complicated. As to his looks, his height is of course no bar to his performance; John Rhys-Davies who played Gimli in the Lord of the Rings was taller than both Viggo Mortensen (Aragorn) and Orlando Bloom (Legolas). Will he be the first heartthrob from Under the Mountains? We shall have to wait until December to find out (or you could have a sneak preview below!)

Many critics say the film is too long - how did you find it?

Some Behind the Scenes Footage of The Hobbit