The Magic Word Is “Shazam!”

A Hero by any Other Name

What an amazing month for heroes currently or previously named “Captain Marvel” (my review of the Marvel Cinematic Universe film’s Captain Marvel can be found here, while a discussion of the full range of the Captains named Marvel (yes, there’s more than just two) can be found here). So, with all of that now out of the way, we can get on with the review of “Captain Sparklefingers” (more later).

To start this off, it is a better-than-even-bet that most of this film’s target potential audience are less familiar with the background and history of the Fawcett/DC Captain Marvel/Shazam than they are with Marvel Comics Mar-Vell/Captain Marvel (it’s for certain that they know less about Shazam than they do about DC’s other heroes; Superman or Batman). Still that shouldn’t dissuade anyone from seeing this delightful film.

The Story of Billy Batson

Shazam! Is the story of young Billy Batson (Asher Angel), a youth stuck in the foster care system, who runs across an ancient wizard who has been tasked with protecting the Earth from the ravages of the seven deadly sins and — upon discovering Billy, determines that he is pure of heart — bequeaths him magical powers (the wisdom of Solomon, the strength of Hercules, the stamina of Atlas, the power of Zeus, the courage of Achilles, the speed of Mercury). Henceforth, whenever Billy utters the name (“Shazam”) he transforms back and forth between 15-year-old boy and an adult superhero (Zachary Levi).

The Boy Behind the Hero

As the film progresses this transformation (quite naturally) freaks-the-frack out of young Billy. Thankfully though, his foster brother, Freddy Freeman (Jack Dylan Grazer), is a tad more hip to the nature of superheroes (being something of a fan of Superman and Batman (who co-exist in the universe of this film), so Billy calls upon Freddy who then takes it upon himself to coach Billy in the ways of superheroing.

A long and Winding Road

Unfortunately, it takes a bit of time for the rambunctious Billy to not only figure out his powers, but how to best utilize them (also, it seems to take longer still for him to actually access “the wisdom of Solomon” as he (as Shazam) behaves more like his 15-year-old self than like an adult superhero (making this film something akin to a cross between Tom Hank’s turn in Big and TV’s

The Greatest American Hero than like any of the previous Zack Snyder-themed dark vision of DC superhero). Needless to say, that it is precisely this lighthearted approach that makes this film eminently more enjoyable then most of what Warner Bros. Studios has done with the DC heroes in in film.

From Comics to Film

The Power of Shazam 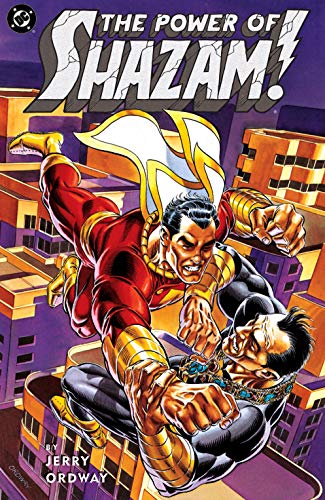 The Power of Shazam! (The Power of Shazam (1995-1999))
This volume presents the re-imagined adventures of Billy Batson and the origin of Captain Marvel, as depicted by Jerry Ordway when the character was relaunched at DC in 1995.
Buy Now

A DC Film with a Positive Vibe

In fact, Billy’s journey from zero to hero is more than just fun, it is the kind of fun that this particular reviewer had when he read actual comicbooks during his ill-spent youth. Sure, there was a real hart-warming story here of a kid who was separated from his mom at a very young age, and then spent the next decade searching for her. But it is also the story of a story of a racially-diverse family who share not a single drop of blood between them but are more of an actual family than many families. It is the story of a handicapped boy who believes in hope, (truth, justice, and the American way). It is the story of children who have all the odds stacked against them and yet never give up and succeed against all odds.

Not the DCU We've Previously Seen

Given the mostly dark, dystopian approach that the cinematic DC Universe has presented to us, the viewing public, this film is a bright sunshiny day full of positive vibes, good cheer, and uplifting role models. As we’ve discussed elsewhere (also see links at the top of this review) the histories of the Captains named Marvel (all of them) is a twisty, convoluted mess of lawsuits, competing copyrights, complex trademark law, and various publishers competing with each other for the right to own the name. Currently, only Marvel Comics can claim to be publishing Captain Marvel, even though Shazam originally bore that name over at Fawcett Comics.

Still, having said all of the above, one need not know anything about the past history of any of the Captains Marvel to fully enjoy this film, as it virtually stands alone from all of that, and one need only have the merest of passing knowledge of the DCU to appreciate the on-screen antics of the players in this film. However, for those of us who know more of the past history of comics than any adult should reasonably admit to knowing, there are plenty of in-jokes, sight gags, and internal references that help sustain and buoy the film throughout its runtime. (One of the running gags throughout the film is that Neither Billy nor Freddy can figure out a cool superhero name for this guy, so they run the gamut of silly and outrageous names, one being “Captain Sparklefingers”.)

Sit through the Credits

Oh, and when you do go to watch the film, make sure to sit through the entirety of the credit roll, as there is a post-credit trailer that — while it doesn’t require watching to understand any of the film, nor does it hint of the (already planned sequel) it does contain a very worthwhile and entirely humorous, left-handed slam against another DC superhero that any fan of the comics (or The Big Bang Theory) can spot coming a kilometer away, and thoroughly appreciate.

A Superhero Film Well Worth Watching