The Messiah - What's the deal with standing for the Hallelujah Chorus?

Last spring I attended a performance by the Trinidad Invaders Steel Drum Orchestra during Dollywood's Festival of Nations. One of the songs they played was the Hallelujah Chorus, a popular choice from Handel's Messiah. Several members of the audience stood during the music. My friend stood and motioned for me to do the same. I didn't know why but did anyway. She explained later that it was traditional to stand when the Hallelujah Chorus was played. I had never heard of this and decided to look into the matter further.

Background information. George Frideric Handel was born in Halle, Germany in 1685. He was a musical child prodigy and began composing at an early age. He earned early success with numerous Italian operas but as that genre began losing interest with the masses, he experienced repeated failures. The English oratorio became more popular and Handel developed numerous works in that genre. Messiah is his sixth English oratorio and it became his best-known work. It opened to moderate success and was often performed for the Foundling Hospital in London, that still exists today as The Thomas Coram Foundation.

I've always thought that the title was "The Messiah," but further research revealed that it is simply called "Messiah."

Handel's friend and supporter, Charles Jennens, was inspired to compile scriptural text from the King James Bible and Book of Common Prayer. He gave it to Handel, who began composing an oratorio of the text on August 22, 1741 and it took less than a month to write.

Messiah is the Biblical story of Christ's birth, life, death and resurrection. Part one is the prophetic telling of the Messiah's coming and his birth. Part two is Christ's passion and death, resurrection and ascension into Heaven. Part three is the promise of redemption and the prediction of judgment for all. It has undergone numerous revisions over the years of choral parts and solos and a variety of musical instrument changes.

Originally meant for performing during Lent or at Easter, today Messiah is now more popular at Christmas time. The premiere was held on April 13, 1742 in Dublin, Ireland. At the first showing in London on March 23, 1743, King George II was in attendance. When the Hallelujah Chorus began, he is rumored to have stood up. Since all subjects were required to stand when he did, everyone else stood as well. Thus began a tradition that continues today. There is no liturgical or musical reason to stand, it has just become fairly common over the years.

So, the next time you're at a performance of Messiah, note how many people stand during the Hallelujah Chorus. Will you be one of them? 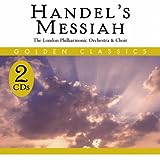 This London Philharmonic Orchestra performance is available for MP3 download.

Do you stand or remain seated during the performance of Hallelujah Chorus?