The Minack - theatre above the sea

The Minack Theatre: a wonder of the world.

In the mystical far west of Cornwall, a land of mystery and myth, there is a wonder of the world: the Minack Theatre.

The Minack, as it is affectionately abbreviated by the locals with a justifiable and proprietorial pride, is a tiny theatre, hewn painstakingly from the rocky face of a cliff. Nestling in the cliffside, it overlooks the sea on the Minack headland at Porthcurno and is open to the sky, the stars and the elements. It is a place of utter magic.

The Minack Theatre needs a special sort of audience ... and actor.

The theatregoers sit on grass topped tiers with hired cushions, cleverly furnished with backs attached, for a little support and protection. In fine weather the audience arrives early with lavish picnics that stop just short of butlers and candelabras. Even in wet weather they still come, stoically armed with waterproofs, flasks of whisky-laced tea and rugs as performances are only cancelled in the very worst of weather.

But then the Minack seems to only attract the best sort of audiences, the ones determined to enjoy the performance with the greatest good-nature and high spirits; the ones that allow themselves to become interactive if the actors take it into their heads to wander amongst them.

The actors, too, are often special as this place has little time for self-obsessed luvvies. Actors here have to be a humorous, tolerant and undemanding breed as the dressing rooms are non-existent and all too often they can be upstaged by dolphins who tend to time their own aquatic displays to coincide with such a handy audience. It's true that not even Macbeth can compete at these times and all action on the stage is suspended until the dolphins finish showing off and take their final bow. 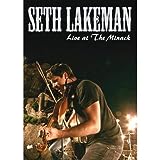 Live at the Minack
Buy Now

The Minack was the almost-accidental vision of Rowena Cade, a woman who obviously believed that anything was possible. Born in 1893, she came to live in nearby Lamorna just after the end of the First World War. Despite her genteel background she was obviously a young woman of spirit having broken horses for the army ready for them to be sent into action on the front line during the war.

Peacetime could well have seemed a little tame until she found the Minack headland. Falling in love with the scenery she promptly bought it for £100 and then set about building a house for herself and her mother.

The life's work of Rowena Cade.

After the house was built life must have settled down once more until she offered to let some friends stage a play in her garden. The play was The Tempest by Shakespeare and it was obvious that the sea, as seen from her garden, would make the most appropriate scenery. There was however the problem of seating for the audience. At once Rowena's creative and resourceful mind found the answer.

Down below the Minack rock on the headland was a hollow in the cliffside, almost like a natural amphitheatre and Rowena immediately saw its possibilities. Within six months she and her two gardeners had created a makeshift stage and enough seating for an audience. The Minack Theatre was born and Rowena was to remain committed to it for the rest of her life.

That first production of The Tempest was fairly basic, lit by batteries and even car headlights. And after buying tickets from a table in the garden the audience had to brave the gorse prickles to get down to the 'theatre' but despite such privations this first play was such a success that it was even written about in the Times newspaper. For Rowena, however, this was only the start and, in between making costumes for the productions, she and her faithful gardeners worked hard to improve the structure of the theatre.

Only the Second World War halted her constant efforts to develop the Minack and it must have been sad to see the theatre disappear under coastal defences of barbed wire and concrete. Finally, even brambles gave a helping hand and Rowena turned her attention to the war effort.

For the duration of the war she undertook the task of finding homes for the hundreds of children that were evacuated from the cities to Cornwall until the war was over. Then, once more, she began the long job of clearing the undergrowth and resurrecting the theatre, even creatively using the old gun battery as the new ticket office.

Over the ensuing years Rowena's relentless energy and imagination saw her go on to create an access road, car park and even steps up to the theatre from Porthcurno beach. When at last her loyal gardener, Billy Rawlings, died in 1966 she dedicated a large granite seat to his memory; it still remains the only true 'seat' in the theatre.

Despite all the financial vicissitudes over the years Rowena kept faith with her creation, keeping it going until, at the age of eighty three in 1976, she gave it over to a Charitable Trust. Despite this she still continued to work on the theatre, whatever the weather, for a little longer until she was in her mid-eighties. She was nearly ninety when she died in 1983.

Since then the changes made by the Trust, the new open-all-year visitor centre, the appropriate retailing and the longer season of plays, mean that the Minack Theatre is now, finally, a profitable concern. This is important as it means security for this unique creation, ensuring that the Minack continues, not just to be a novel place to see a play but also, more importantly, as a striking and beautiful monument to a truly remarkable woman.