The Monkees: The True Choice

I was that loner kid who read comics when everyone else was playing, listened to the B-sides, watched old movies ... And wrote in spirals

For Pete's Sake, you'd have to be a chronic daydream believer not to love these guys.

I listen to music according to my mood, not because it is considered "hit radio"; I can't live according to trends and phases. That's why on one warm October day last week, I found myself popping in a random MONKEES CD that I'd compiled around 2006 or so ... It was made up mostly of tracks from the last two studio albums from the American Fab Four, Justus and Pool It.

I won't bore you with the well documented history of the dynamic group that so many callous, narrow-minded chumps categorize as the "Prefab(ricated) Four". I won't go into how they topped The BEATLES on the charts or the cult status of their popular tv show -- The Monkees -- and movie -- Head . And I won't talk about how when they performed on The View this past summer, middle aged women looked as if they still wanted to throw their skivvies up on the stage. No, I won't do that, because its all been done before. The results being that the group is still misunderstood, disrespected and kept out of the Rock & Roll Hall of Fame. So I won't even waste my breath.

What I will speak of is how the songs live on. How hearing Daydream Believer and It's Not Too Late puts me in a melancholy mood -- kind of like when I'm depressed and cheer myself up by buying a chocolate fudge sundae from McDonald's . All of a sudden, there's a stimulation factor that softly and tenderly lifts you out of that dark funk and takes you on a high that is mostly indescribable to those who haven't experienced it first hand.

MICHAEL NESMITH describes MICKEY DOLENZ's voice as something special and unappreciated in the liner notes of Justus . I'm paraphrasing of course, but to co-sign, I must say that his pipes should be honored right up there with the very best soulful singers of that era and beyond. As well, when you listen to modern Monkee jams like, Secret Heart and Don't Bring Me Down , a soothing comfort washes over you. In fact, putting in your favorite Monkee disc is akin to reuniting with an old friend that you didn't realize how much you missed until you were once again face to face. And isn't that what good music should do for us?

Good music versus hit music means: when you hear a certain song, waves of memories flood over you. Waves of emotion overtake you; reminding you of a time where you felt safe, protected and loved. In my case, taking me to a time when a show about 4 guys living in a beach house came on everyday after I got out of Nursery School -- 'round about 4 or 4:30. And I didn't know what syndication was or that this show had been off of first run television for at least 7 years. All I knew was that I liked what I saw and heard ... And I still do.

When Davey Jones died, it seemed like the dream was finally over. But not necessarily so if you know Monkees history.

Originally, the foursome became a trio when Peter Tork decided to leave the band not long after the series ended. Not long after that, Mike Nesmith left, which left Mickey Dolenz and Davey Jones to do one "final" album together.

Of course we all know of the 80s revival. But did you realize that on the 3 new songs produced for the Then & Now greatest hits package, only Mickey and Peter sang? And for the longest there was the Jones, Dolenz ,Tork package that continued the Monkees brand throughout the 80s, 90s and 2000s.

Mike came back in '96 for the Justus project, a great ABC tv special and a bit of touring. But the only combo we hadn't seen was the Mike, Peter and Mickey version. Thankfully they embarked on a tour where each date was packed with true Monkees fans in 2012. And to hear those great songs live one more time ... Nothing in the world like it. The Monkees are my Beatles. The true choice. 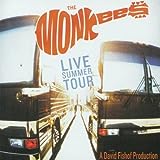 Live Summer Tour
A 2001 concert released in 2002, this seemed to be the last we'd hear of the popular trio. But you just can't keep a good Monkee down.
Buy Now

Farewell ... For Real This Time

On December 10, 2021, Michael Nesmith transitioned from this plane to another. This took place a few weeks after he stood on stage with his comrade in arms - Micky Dolenz - one last time. To say that I and millions of Monkees fans are heartbroken is to say the absolute least.

TruSoulDJ is a self proclaimed expert on all things trivial to the Mainstream. He is an avid classic comic book reader, non popular music lover and tv-show-on-dvd binge watcher who shops the clearance racks near and far to find the best deals. He would like to think he knows everything important within the realm of Pop culture. But in actuality, he only knows about 99.9 percent of what he thinks he knows.