The Mummy - on the Screen

The discovery of King Tutankhamun's tomb in 1922 revived public interest in Egyptian history, the 'Curse of King Tut' and the mysterious deaths following the excavation captured the world's imagination. Before long the Egyptian Mummy would join Dracula, Frankenstein and the Wolfman as one of the classic screen monsters.

Boris Karloff (1887-1969) only appears wrapped in bandages in the opening minutes of the film. we see the mummy's eyes open and an arm moving but we don't see him walking just some loose bandages moving on the ground. The next time we see Imhotep it is in the guise of Ardath Bey, with a shrivelled face he is wearing clothes and a fez.

Mummy fans may feel cheated but this classic movie has one of Karloff's great performances aided by superb make-up from Jack Pierce.

Sir Joseph Whemple: "Death... eternal punishment... for anyone who opens this casket. In the name of Amon-Ra... the king of the gods." Good heavens, what a terrible curse!
Ralph Norton: Well, let's see what's inside!

Doctor Muller: Burn the scroll, man. Burn it! It was through you this horror came into existence.

The first of four films featuring Kharis in the Universal Mummy series, Lon Chaney Jr would play him in the sequels.

This underrated film became the template for all subsequent mummy films: The mummy's tomb is discovered, the mummy is reanimated, it starts to kill the desecrators of it's tomb and is protected by some mad priest.

The High Priest: For who shall defile the temples of the ancient gods, a cruel and violent death shall be his fate, and never shall his soul find rest unto eternity. Such is the curse of Amon-Ra, king of all the gods.

One interesting and startling effect is used for the first time in this film, the mummy's eyes are animated pitch black by the special effects guys, see screen shot above,

Tagline - They dared the curse of the ancients... to solve the most amazing mystery ever encountered by mortal man!

Lon Chaney Jr (1906-1973) takes over the role of Kharis the mummy from Tom Tyler. There are some movie fans who wonder if Chaney really was under the bandages apart from a few publicity shots. Stuntman Eddie Parker was the stunt-mummy in a few scenes.

The story takes place 30 years after the events of the previous film and if that was set in 1940 this film must be set in 1970!

At only 60mins, one of the shortest movies in the Universal horror series.

Tagline - Eyes That Crawl With Madness! Hands That Creep Like Cobras!

Despite burning to a crisp in the previous film Kharis was back killing infidels. The funny thing is no matter how fast his victims ran the slow, shuffling, foot-dragging mummy always caught up with them.

In this series Kharis needs a brew made from three tana leaves to keep him 'alive', administered by the high priest, usually played by George Zucco.

The second mummy film of 1944 and Lon Chaney's third and last appearance as Kharis.

Kharis would next appear in Hammer's The Mummy (1959) and played by Christopher Lee.

Tagline - Buried Fury! Stalking to Life From the Depths of Doom!

After playing Lon Chaney Jr's stunt-mummy in previous mummy films, Eddie Parker finally gets to play the lead mummy and has an on-screen credit too.

Abbott and Costello had already encountered Dracula, Wolfman, the Frankenstein monster, Jekyll and Hyde and the Invisible Man, so it was inevitable they would meet the Mummy too.

Despite being named Pete and Freddie in the credits, Abbott and Costello call each other by their real names in the movie.

Tagline - They're back... in their mummy's arms!

Distributed by Universal studios in the U.S. this isn't really a remake of the 1932 Karloff classic the film is closer in spirit to the 1940s Mummy films. Kharis the mummy kills the desecrators of his tomb and is protected by an Egyptian priest.

Christopher Lee dislocated his shoulder when he bursts through the door of a mansion trying to kill Peter Cushing, the shot was left in the film.

The Curse of the Mummy's Tomb (1964) Directed by Michael Carreras. 81mins.

Hammer's second Mummy film has no connection to the first. There are some nice gruesome deaths but the mummy Ra doesn't appear until half the film is over. The film has one original twist and that is one of the main characters turns out to be Ra's brother, cursed with eternal life.

The third Hammer Mummy film and this time it's the mummy Prem who is revived and goes on the usual rampage.

The last Hammer film to be filmed at the old Bray studios, moving to Elstree in 1967.

Tagline - Beware the beat of the cloth-wrapped feet!

The 4th and last Hammer mummy film, interesting and unusual horror which does not contain a bandaged covered mummy.

After an expedition unearths the tomb of an ancient Egyptian Queen and the sarcophagus is taken to London, the evil spirit of Queen Tara is awakened and possesses the daughter of the professor who led the expedition and people start to die mysteriously.

Director Seth Holt died of a heart attack before filming ended, he was 47, producer Michael Carreras took over and finished the film.

The Mummy - Stephanie Zimbalist (possessed by the Mummy of Queen Kara)

Basically a big budget remake of Blood from the Mummy's Tomb. Charlton Heston's daughter is possessed by the evil spirit of an ancient Egyptian Queen and people start to die violently.

The Omen meets The Mummy but the reviews were poor and the film was only a moderate success.

Heston turned down the role of Robert Thorn in The Omen, he wrote in his autobiography that he regretted the decision after Gregory Peck took the part and the film was a smash hit.

Tagline - They thought they had buried her forever!

Time Walker (1982) aka Being from Another Planet. Directed by Tom Kennedy. 83mins.

A mummy discovered in King Tutankhamun's tomb is re-animated by an alien lifeforce which has attached itself to the mummified corpse. Well it had to happen eventually - mummies and aliens.

This movie featured in an episode of Mystery Science Theater 3000.

Tagline - For eons they traveled the galaxies. For centuries one was trapped in a Pharaoh's tomb. Now he is free.

An unnamed Mummy appears alongside the Wolfman, Gill man, Frankenstein's monster and Count Dracula in this entertaining horror comedy.

Detective Sapir: So let me get this straight. You're telling me there was this two-thousand year-old mummy here, right? But now he's not here. He's gone. Vanished. History. And you're saying you didn't hear anybody come in here or leave, is that right? Can you hear me now? Hello!
Night Watchman: I can hear you fine.

A mummy is obsessed with finding the reincarnation of his long lost love and wreaks vengeance on those who desecrated his tomb.

At one point Anthony Perkins was to star as the mummy with Ken Russell directing.

Tagline - Bound by destiny. Consumed by sin. His vengeance is eternal

Talos the mummy goes on the rampage after his tomb is discovered and the sarcophagus taken to the British museum.

The mummy in this film can fly and uses his bandages like tentacles to kill his victims.

Basically Indiana Jones and the Mummy's Tomb, The Mummy was one of the biggest hits of 1999, easily making more money than all previous Mummy movies added together.

Winston: What's the challenge, then?
Rick: Rescue the damsel in distress, kill the bad guy, save the world.

An enjoyable horror adventure with plenty of humour and clever special effects. Followed by two sequels.

Imhotep: Death is only the beginning.

The Mummy cost $80m to make and has grossed $416m worldwide.

Tagline - Uncover the secret. Unlock the legend. Unleash the power.

Sequel to The Mummy (1999) with plenty of action and variable special effects, the last sequence with the Scorpion King did not look all that convincing. Dwayne Johnson starred in a spinoff movie titled The Scorpion King released the same year.

Izzy: O'Connell, who the hell you been messing with this time, huh?
Rick: Oh, you know, the usual. Mummies, pygmies, big bugs.

Elvis Presley and John F. Kennedy are residents in a nursing home, which gets attacked by a reanimated Egyptian mummy.

Elvis: Ask not what your rest home can do for you. Ask what you can do for your rest home.
JFK: Hey, you're copying my best lines!
Elvis: Then let me paraphrase one of my own. Let's take care of business.
JFK: Just what are you getting at, Elvis?
Elvis: I think you know what I'm gettin' at Mr. President. We're gonna kill us a mummy.

An instant cult classic by director Don Coscarelli who's main claim to fame were the Phantasm moviies. Bruce Campbell and black actor Ossie Davis are both excellent as the residents claiming to be Elvis and JFK.

Second sequel to The Mummy (1999) but with Stephen Sommers now producing and Rob Cohen taking over as director. Rachel Weisz sadly declined to appear in another one and Maria Bello took over her role. It was fun seeing Hong Kong superstar Jet Li playing the mummy but this was the least successful of the three films.

If there's a 4th one will it feature Mexican mummies? 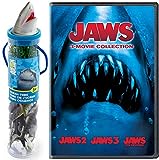