The Three Stooges Will Make You Laugh

Physical comedy is like a train wreck because you know you shouldn’t watch but can’t turn away. That’s why there are two kinds of people when it comes to the Three Stooges: those who find them hilarious and those who can’t understand why anyone would find them hilarious. Be that as it may, physical comedy didn’t start with Moe, Larry and Curly but it might as well have. Comedians that came before, like Buster Keaton and Harold Lloyd, worked to refine physical comedy so that it was more “sophisticated” in its appearance. But it took three knuckleheads to smash out all of that nonsense and bring slapping, hitting, eye-gouging and nose pulling right in the viewer’s face. And the beauty of it all was that you aren’t empathletic with the Stooges, you are actively rooting for the attacks on them. And then rooting for them counter-attacking like mad. But enjoying the Stooges means understand them too. So with all that said, it’s time to pull out Volume 1 of THE BEST OF THE THREE STOOGES.

This DVD box set doesn’t just present a few of those 20 minute shorts that appeared before the feature film and then call it a day. What you’re getting are 87 of what can be argued are the best of their actions: Moe, Larry and Curly each well defined in their characters — Moe the Leader and bully, Larry the laid-back and agreeable, Curly the wild and over-the-top — and doing what they do best. Hint, it’s not plumbing.

So sit back and watch what moviegoers used to chuckle and guffaw at — even those who pretended they were too highbrow to find anything the boys did as funny. Just remember that each short had the purpose of making a quick point about comedy and then going away just as quick because the feature — the “real” movie — was about to begin. And thanks to black and white, the shorts don’t look dated even though the outfits and technoogy and even some of the speech is. But when your’e dealing with comedy, it’s all good.

There’s plenty more to watch too. Such as full length movies and documentaries and even more. So because Volume 1-3 needs to provide some depth, there’s the added “third” Stooge — remember that Curly passed away in 1952 and had to be replaced (you can’t have two Stooges making up the three). So Moe’s brother Shemp stepped into those Nyuk, nyuk, nyuk shoes, but he already had made film appearances and so wasn’t being asked to do so because he had noting else going on. Thus this presentation of 14 comedy shorts from Shemp, dating from the 30’s and 40’s. Next up is Joe Bessser, who featured as the third Stooge — 10 side-splitters from the 40’s and 50’s now start playing. The final third Stooge captured on DVD is Joe DeRita, with four comedy shorts circa the 40’s.

Also presented, and rarely seen if at all, are cartoons from the 30’s and 40’s. This alone is worth the price of admission for Stooges fans (sophisticated film goers who extend their pinkies when drinking tea need not apply).

And Even More Stooges

Feature films now take center stage: Have Rocket Will Travel, The Outlaws is Coming and Rockin’ in the Rockies. Product values be dangled for these late 50’s and early 60’s films — Rocket is ridiculously good fun, especially for kids for whom the film was being targeted at. And yes the slapstick has been toned down, but the Stooges are still the Stooges. So there! Add a 2000 biopic of the Stooges here if you need to calm down.

Lastly, there’s episodes from the documentary, “Hey Moe, Hey Dad.” This is a much more personal and human look on what to the world seemed a trio of ridiculous and stupid clowns.

But riddle me this — how come the Stooges continue to regain their popularity after lying dormant for a couple of years? It’s almost as if they possess the immortality of the power of slapstick comedy and the train wreck that continues to call attention regardless of the times, regardless of digital devices and regardless of social media. So yeah, Curly does get the last laugh...Nyuk, nyuk, nyuk. 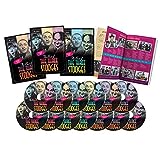 Time Life The Best of The Three Stooges
Buy Now