The Umbrella Man and Discovered Films of the JFK Assassination of November 22, 1963

During Thanksgiving Week of 2011, 48 years after the assassination of President John F. Kennedy, new forces were at work to solve the case with a lone shooter. A public recognition of the man that led police to Lee Harvey Oswald in a theater, a junior high school girl's film footage, and emphasis on a 1990s book siding with the Warren Commission all occurred coincidentally during Thanksgiving Week 2011.

Two out of three might be a coincidence, but three events make the triangle of a marketing plan. None of this new recognition or information erases the fact the the Oswald floor of the Dallas, Texas School Book Depository was turned into a museum and important pieces of the structure were removed and rebuilt beforehand, just as JFK's limo was completely restored very quickly before it was sent to it's museum home, and a portion of JFK's skull was taken out of the operating room to places unknown. Add to this the fact that the Secret Service walking next to JKF in the motorcade were told to back off by their supervisor, all clearly seen in actual film footage, and a coverup seems more ironclad. Looking at the venom spit at the other side by both major political parties from 2000 - 2012, one thinks, Could this have been a case of one political party assassinating a member of the other? 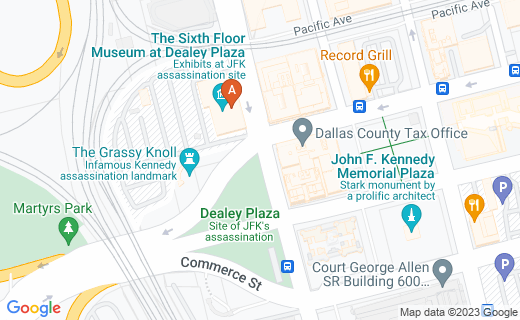 The Dallas Holocaust Museum is about one block away to the east on Record Street.

In Clint Eastwood's 2011 film J. Edgar, a scene shows that at the very time of the Dallas assassination, Hoover was reviewing an audio tape reel of a Kennedy-like voice and that of Marylin Monroe in a tryst. Truth or fiction?

Moot: We Don't Need a Shooter On the Grassy Knoll

A small contingent threw itself behind the old Warren Commission's "single shooter" determination in November 2011 to support a 1993 book called Case Closed by Gerald Posner. It cheers for the single shooter verdict. At the same time, a significant amount of evidence otherwise, from eye witnesses and amateurs with video cameras was on hand and today is available, all this in addition to the legendary Zapruder film.

One newly discovered film was that recorded by a 13-year-old girl on the street in Dallas at the time of the assassination. She spoke of distinctly hearing three shots during the killing, but the Polce Department says in November 2011 that they found a hole in a traffic light to match the first shot. After 48 years, is that match a truth or a wishful thought? Did that hole somehow match a shell form Oswald's rifle? Where is that rifle?

At the same time, a film by then-teen Tina Towner, given to a film restoring company (Image Trends) that uses computer software - anything can be done with image software - reports no image of any person on the grassy knoll. That's fine. It says nothing about the eye witness sighting of three men farther back near the rail tracks, all holding rifles. We do not need a person on the grassy knoll in order to have another shooter or two.

The fact that some individual or group tried very hard in 2011 to end speculation and investigation into the assassination of President John F. Kennedy is telling. It seems an extraordinary effort.

A new novel is to be released in 2013, containing more factual information about the JFK Assassination. The author is syndicated columnist William Hamilton. Mr. Hamilton and his writing partner are convinced that Lee Harvey Oswald and Jack Ruby were both manipulated by others*, the assassination connected to certain events and ideas of WWII.

*Reference found at http://www.central-view.com/past.asp?number=1557. Mr. Hamilton feels that incidents in World War II led all the way to the JFK assassination on November 22, 1963 and to the deaths of over 58,000 Americans in Viet Nam.

JFK: An American Coup D'etat: The Truth Behind the Kennedy Assassination
Buy Now

The Umbrella Man - A Film Short by Errol Morris

Professor Josiah "Tink" Thompson quit his position as a Harvard philosophy professor to write Six Seconds in Dallas and become a private detective. Errol Morris produced the 61/2 minute film short called The Umbrella Man, which includes Thompson and his story. It is a documentary about a man standing on the sidewalk in Dallas near the motorcade, holding an open umbrella on a sunny day.

Was the umbrella-holding person a signal man to assassins? A spy using radio equipment or advanced weaponry? Or is his presence meaningless?