The movie premise is rather simple: A man and woman who have been in love for four years, and who are married are rear-ended by a salt truck. The wife, Paige, is thrown through the glass. She awakes some days later. Her husband, Leo, is surprised when she mistakes him for her doctor.

The course of the movie is beautiful, heartwarming, and surprising. The trailers did not give away the movie! 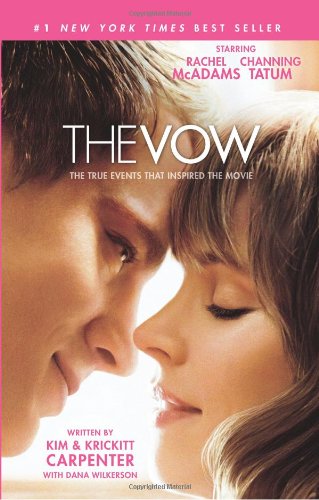 The Vow: The True Events that Inspired the Movie
Buy Now

On a scale of 1 to 10, my beautiful wife rates this a 10. This is what she says, "I like that Leo did not give up right away. He loved her so much that he even sacrificed his work just to help his wife. I loved how they loved each other."

My Rating of The Vow

I second the 10 score. This movie had everything I want from a movie. All the actors and actresses performed excellently. Even Jeremy, who we are not supposed to like, was well-acted. All the characters were believable and palpable. Sam Neill plays the part of Paige's father, a successful lawyer. Neill typically plays a more heroic character. However, in this film, the lawyer-father does not have the best character.

I shared the emotions of the characters. I could really feel how much I love my own wife as she and I sat watching the trials and determination of Leo. A few tears fell during more than one scene.

Unlike too many movies on the silver screen today, there was no work-in of a slander on Christians or God; no promotion of atheism; and no promotion of homosexuality. I was glad to not have this distraction.

On the contrary, when Paige's mother talks about her marriage, she really hits home. The mother did something for the father that we all need - more often than we like to admit. (I don't want to ruin the movie, even just a little.)

However, what the movie omits is typical of Hollywood. In the true life story, the wife, Krickitt, was "so messed up I couldn't recognize her," as her husband, Kim said. Nevertheless, he refused to give up. He went to the hospital chapel and began to pray. The next morning, her swelling began to subside and her critical indicators began to normalize.

Later, when Krickitt "felt nothing" for Kim, he refused to give up, saying, "I made a vow before God."

Hollywood likes to insult God and Christians when there is no need. And, when God is glorified, they like to leave it out.