Timeline, released 2003, is a highly fictionalized version of the Edwardian War phase of the Hundred Years War in France. The costumes, props, and countryside are as accurate as Director Richard Donner, cast, and crew could re-create 1357 a.d. France. Timeline is a well done Science Fiction/Fantasy and Adventure film. It is based on the novel Timeline authored by Michael Crichton.

Timeline begins in "the near future". A man somewhere in the desert nearly becomes run over by an automobile on the highway. The driver swerves and stops; notices the man's strange 14th century attire and gashes on his body. He immediately cell phones for emergency medical assistance. Then the scene changes to the hospital. The wounded man's name is Taub (Jayson Merrill) and he dies on the ER table from multiple sword wounds and inexplicable fractures throughout his organs and bones.

The attending physician is surprised he survived the trauma as long as he did, but cannot explain how Taub, an employee of ITC (according to the man's wallet found in his leather pouch), could have received these strange fractures. The physician mistakenly believes Taub was at some kind of costume party because of his unusual clothing. People from the corporation ITC move swiftly upon hearing from the hospital and claim Taub's body.

The plot then shifts to France at the archaeological digs near the ruins of Castlegard and La Roque Castle. Here the storyline introduces the archaeologist/professor Johnston (Billy Connolly) and his team (Andre Marek played by Gerard Butler, Kate Ericson portrayed by Frances O'Connor, Francois Dontelle acted by Rossie Sutherland, and Ethan Embry as David Stern, the team's physicist). ITC Corporation is behind the funding of Professor Johnston and his team. ITC wants detailed reports of their findings at Castlegard and La Roque Castle digs. Professor Johnston, however, becomes more and more curious about the tips given by ITC regarding where he and his team are supposed to do field research at these sites. The tips from ITC seem to be more than "just tips" for at each tip site the team finds important artifacts dating back to 1357 a.d.

The Professor expresses his concern of the uniqueness of these tips to his son, Chris Johnston (Paul Walker), who is visiting and helping the team in their work. Professor Johnston explains to Chris that he will be meeting with Robert Doniger (David Thewlis) at ITC in New Mexico to find out the source of these tips. This decision to confront Robert Doniger at ITC, plunges Professor Johnston directly into 1357 a.d. via new technology created by ITC for transporting items from one place to another, but for some unknown reason instead opened a wormhole into 1357 a.d. Castlegard and La Roque Castle area in France.

This causes his research team to find the professor's glasses in a section of La Roque Castle that had not been visited for over 600 years. His team finds this peculiar and is further puzzled by the handwritten note carbon dating back to 1357 a.d. signed by Professor Johnston requesting help. The entire team and his son decide to telephone Robert Doniger and demand to speak with the professor. Due to the unavailability of the Professor (who left the team and his son 2 days prior for New Mexico) and their insistence to know where the Professor is, catapult Chris and the team, except for the team's physicist David Stern, into an adventure of a life time including a very unusual rescue mission that takes place in France 1357 a.d.

They are given a deadline by ITC of 8 hours. If their team cannot be successful within the 8 hours, they could be stuck in 1357 a.d. forever. Furthermore, they are warned to be careful not to change past events while interacting with the past, else they might alter event occurrences within their own time frame that could cause the time travel technology not to exist or worse.

The primary cast further included (in order listed by credits): Anna Friel (Lady Claire, sister of Lord Arnaut), Neal McDonough (Frank Gordon, security man who went with the team since he had been on an earlier mission and had already interacted with 1357 a.d. France), Matt Craven (Steven Kramer, the inventor of the device that opened the wormhole to 1357 a.d.), Michael Sheen (Lord Oliver, English enemy of Lord Arnaut), Lambert Wilson (French Lord Arnaut and Lady Claire's brother), Martin Csokas (Sir William DeKere aka William Decker, an ITC employee, who was left by Frank Gordon in 1357 a.d. and out of self preservation joined Lord Oliver), Steve Kahan (Baker), Patrick Sabongui (Jimmy Gomez, another security person who went with the professor's team and ex-marine), and Mike Chute (Bill Baretto, other security person who left with the professor's team and also an ex-marine).

Timeline does depict the gore side of the 14th century. Very realistic with severing of heads from swords, blood oozing out of bodies from being shot by arrows or stabbed by swords, and so forth in that vein. This movie points out authentically how dangerous the 14th century truly was for men and women due to the "might is right" attitude of the time frame. I loved the surprise by the team of the professor's when this hit home for them upon their arrival into the past. They had expected a "more civilized" 1357 than what they found. Timeline is accurate with this portrayal and surprise from the team for 1357 a.d. was extremely barbaric compared to our time frame. A hearty thank you from this History buff to those who wrote these character observations brilliantly into the script!

Timeline is rated PG-13 and 1 hour 56 minutes in length. I recommend this film, especially if you are a Science Fiction, History and Adventure fan. This movie had great strong women characters (Lady Claire and Kate Ericson). Timeline is well worth viewing. 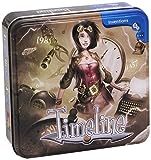