The toccata an extensive piece intended primarily as a display of manual dexterity written for keyboard instruments reached its apex with Johann Sebastian Bach in the eighteenth century. Johann Sebastian Bach’s seven Toccatas incorporate rapid runs and arpeggios alternating with chordal passages, slow adagios and at least one or sometimes two fugues. The Toccatas have an improvisational feel to them analogous to the fantasia. Unlike the Well Tempered Clavier, English suites, French suites and other sets, Bach himself did not arrange them into a collection. When JS Bach left Weimar the toccata at that time was out of fashion. They became in vogue again after his death and were organized into a collection. The g minor Toccata is one of the more obscure of the toccatas and has rarely been performed partially due to the extensive second fugue with its many thorny passages of the contrasting gigue rhythm. However, this Toccata has many fascinating effects. It is one of the only pieces by JS Bach that has dynamic markings of piano and forte.

The g minor Toccata opens with a flourish, which leads into an expressive adagio with an improvisational feel. The adagio is interrupted by a lively allegro in the relative major key of Bb which includes concerto-ritornello passages of imitation and solo/tutti passages. A deceptive cadence leads back into the adagio where it was interrupted and then closes the adagio with a perfect authentic cadence in Bb major. This aspect provides a unity to the different movements of the Toccata. The other striking example of unity between movements is the beginning flourish repeated at the end of the second fugue, which leads into a formal closing of the work.

The extended fugue in a gigue has a subject of an ascending sequence combined with a countersubject of driving triplets. The subject of the fugue has twelve expository entries followed by eleven entries. There are inversions, permutations, combinations of minor with major, which is varied by modulating to the subdominant, then to Eb major and then back to the g minor tonic. The vivacious counter subject of driving triplets provides a symmetrical balance.

To learn more about Fugues please read my other Hub: The Art of Fugue 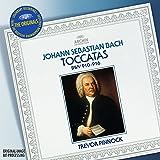