When you think about your life do you ever marvel at all of the different relationships you have? Within your family, you have your parents, siblings, spouse, children and pets. At school and work you have teachers, other students, co-workers and friends. Among your possessions you have your cell phone, computer, books, television, car and clothes. Today as we navigate through the constant barrage of media information, the one place we can find stability and fulfilling relationships is through our favorite T.V. shows. Whether we go back in time with Downton Abbey or stay in the present with Orange Is The New Black we're tied to them emotionally all the same. One of the ways the creators of these shows makes sure we are is through the costumes worn by the characters. I didn't realize how important costumes are until I visited the Fashion Institute of Design and Merchandising's exhibit Outstanding Art of Television Costume Design on August 23, 2014. Blessed with the flair of a couturier and the coordination skills of a stylist the most illuminating thing I learned about today's costume designers is their ability to create miracles with very little money.

"They don't get much of a budget," said Nick Verreos, fashion designer and docent of my tour. "When I've talked to them I was surprised to find they're always at the bottom of the totem pole. If the producers and directors get a budget of $1 million, and the costume designers get very little of that, they're still supposed to make it work and do the best they can."

Recreating the Past Beautifully: Downton Abbey

Downton Abbey is a British historical drama located on an estate. It features the relationships and lives of the people who live upstairs and their servants who work below stairs.

The way Caroline McCall, costume designer for Downton Abbey created the costumes for the characters Lady Cora, Lady Mary, Lady Edith and Lady Rose demonstrate working within a budget beautifully. Her secret? She used modern fabrics that had been treated, appliqued and beaded to look like the 1920s, then added special details for authenticity.

"Look at the rosettes on the bottom of Rose's gown, they're all hand-dyed," said Verreos as he points it out to me in the exhibit. "Even the hem is hand done, and not machine stitched."

Aware that there are viewers who would note inaccuracies on the costumes from that era McCall also insisted the crystals on the gowns be hand done too. Verreos claims to be one of those viewers, and when asked if any designers have ever visited the exhibit and been inspired by displays like this one, he said, "I've been inspired by it and plan to make some evening dresses that hang away from the body, like they did in the 1920s, in one of my upcoming collections."

For Season Four, McCall showcased 1922 and 1923 by creating dresses, for Lady Mary (Michelle Dockery), that were "inspired by Vionnet" and the the ones for Lady Edith were "influenced by George Barbier's and Paul Poiret's illustrations." In contrast, the dowager, Violet Crawley (Maggie Smith), is still costumed in Edwardian clothing patterned after Queen Alexandria.

"Good costume is creating a wardrobe of clothes for these characters, and the actors shouldn't feel like they're in costume-they should feel like they're wearing regular clothes,and the wardrobe should be helpful to them," McCall told Katharine K. Zarrella in the blog Caroline McCall Talks Dressing Downton Abbey for the 1920s on Style File.

A Salute to Haute Couture: Salem

"Salem" is a show focusing on the famous witch trials that took place during the 17th century.

The challenges costume designer, Joseph A. Porro, faced while creating clothes for Salem were similar to McCall's for Downton Abbey, but instead of directly being influenced by popular designers from the era of the story he was influenced by contemporary designer, the late Alexander McQueen, to make the dresses for the witch, Mary Sibley (Janet Montgomery) without the stereotypical trappings.

"He got just one directive from the producers. 'They didn't want actors in big white pilgrim-style collars, instead they wanted a little bit of high fashion mixed in with period costume," said Verreos.

For Mary Sibley he combined the 16th-century silhouette of "full skirts, nipped-in, high waists and puffy shoulders" with couture. Since she's a witch, who loves insects, on one all-black dress he added jeweled flies that look like they've landed on something rotten.

American Horror Story is a show that's has a different theme every season, and the one represented at FIDM's exhibit "Coven" takes place in New Orleans, Louisiana.

There are times when a show comes along that has the ability to reflect a lifestyle so well that fans want to emulate the look. In the 1970s there was Mary Tyler Moore, in Evan Picone, on the Mary Tyler Moore Show and in the 1980s there was Don Johnson wearing light suits and no socks with his loafers in Miami Vice. When I saw the costumes for American Horror Story: Coven I couldn't wait to copy some of the styles because I identified with the way they were recreated. Then when Verreos told me that Lou Eyrich, their costume designer, shopped at thrift stores and vintage shops for the costumes I realized why I immediately connected with the garments. I shop at those types of stores too, so any character who looks like they shop at them, will get my attention.

Is That For Real?

To simultaneously stay within their budget and meet the requirements dictated by the scripts, a costume designer can either "go shopping for a costume" at a store or get it at one of the many rental places in Los Angeles. Realistic shows, where the viewer should be able to identify the character in every day clothing, like HBO's True Detective, TNT's Dallas, AMC's Breaking Bad and Orange Is The New Black on Netflix, need to feature costumes that are true to life.

While I was going to San Francisco State University, in the early 1980s, I was required to take an acting class there. One of the characters I had to play for a scene was Faye Medwick from Neil Simon's play Chapter Two. The actress/student I was in the scene with played my best friend, and one of the play's main characters, Jennie Malone. The play was written in 1979 and my character was supposed to be a well-dressed sophisticated New Yorker in her 30s. To get into character, and convince the class that I was really her age, I had to find clothes that would help me transform. I went into my closet and found a grey wool A-line skirt and cream silk blouse my mother had picked up for me at Bullock's department store. From the moment I put it on, with a pair of pantyhose and heels, I felt like I was wearing something Medwick would've worn and I became her.

The clever way Jennifer Rogien, costume designer for Orange Is The New Black added "little details to distinguish each costume,(i.e., rolling up the sleeves on one of the prison jumpsuits") reminded of my experience at SFSU,and helped me understand the process she went through to make the character more realistic.

Recreating History From a Classic: Bonnie and Clyde

The Lifetime Channel's miniseries about the infamous bank robbing couple

An excellent reason to look at a T.V. program, based on historical events, is to study the way people dressed during a certain era. One of the most intriguing displays, at the exhibit, was the one for Bonnie and Clyde because everything looked so authentic. To ensure their accuracy, the costume designer, Marilyn Vance, studied newspapers from the 1930s.

"Marilyn Vance is iconic," said Verreos. "She designed all of the costumes for Pretty Woman with Julia Roberts. She also designed for Sixteen Candles and Ferris Bueller's Day Off. At the opening I told her "Thank you for making the look of the '80's."

Fashionable, with dreams of becoming a movie star, Vance was able to find a lot of photos of Bonnie Parker and make an accurate reproduction of her "signature crocheted sweater, white blouse, black crocheted cap, and knit skirt." In 1967, when Faye Dunaway played Parker the costumes she wore designed by Theodora Van Runkle, sparked a fashion trend. This time, since the story was made for a smaller screen and Vance used vintage Vogue magazines for inspiration the affect was still striking but vastly different.

After my tour was over, and as I walked back through the campus to the exit, I felt a renewed appreciation for the wonderful costume designers I'd just learned about. Now when I settled back to watch my favorite T.V. shows my connection to the costumes will be infinitely stronger and more profound.

Costume Designers Featured in the Article:

5) Orange Is The New Black, Netflix

Playing Make Believe for the Camera

Are you ever inspired to dress like the characters in your favorite T.V. shows?

The Fashion Institute of Design and Merchandising: A Great School for Fashion 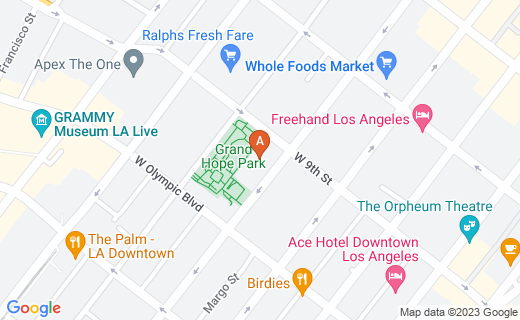 The Fashion Institute of Design and Merchandising

Do you know your fashion stuff?