If you want to buy cool stuff from Japan then a great store is TokyoToys. TokyoToys sells a wide variety of cool Japanese stuff, including a lot of anime and manga related merchandise including figures. TokyoToys also has a shop in central London which allows you to browse their great selection of Japanese toys, clothing and other goods. TokyoToys is a little piece of Akihabara but based in the UK!

TokyoToys is a great place to shop if you are interested in Japanese fashion trends. The Japanese are famously interested in fashion, with shopping districts such as Shibuya and Harajuku setting the trends that the rest of the world follows.

TokyoToys often runs events in their London store which coincide with major product launches in Japan. 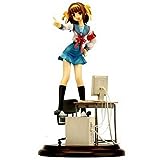 So what are the best selling products you can buy at TokyoToys?

Well it's no surprise that the best selling product is of course Pocky!

If you've ever watched a few anime Japanese shows then you'll have probably seen the animated characters munching on Pocky sticks. These are long biscuits that are covered in chocolate for most of the length. One end is left uncovered so that you don't get your fingers all chocolatey!

Pocky comes in a lot of flavours, but the red box of original flavour is the most popular. In Japan it's possible to buy limited edition Pocky in all kinds of wacky flavours. For some reason there's also a Men's version of Pocky (Pocky Men's) - the chocolate in Men's Pocky is a lot more bitter than with regular Pocky.

After Pocky the best selling products you can buy from TokyoToys are normally related to anime shows and Manga books. Of course Pokemon, Hello Kitty and Domo Kun merchandise are also popular! TokyoToys has a big range of plushies and figures/figurines related to the latest anime and manga releases. All the latest exclusive products are available for pre-ordering from TokyoToys.

By the way, although TokyoToys is based in England, they ship Japanese goods to all over the world!