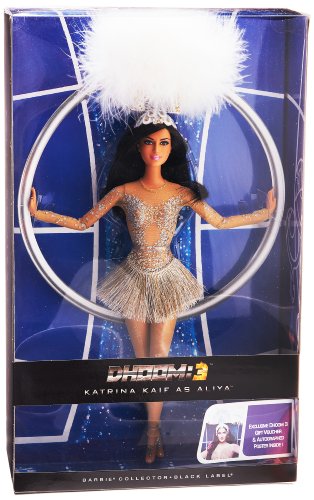 Katrina Kaif is one of the most popular actresses in the Bollywood. This British Indian actress made her acting debut in the Kaizad Gustad's flop film Boom which can be classified as a soft porn movie in the year 2003. Being a British citizen, her journey to stardom in Bollywood was not an easy one but she managed to reach the top through her hard work and dedication. Not knowing or speaking the language was one of her drawbacks when she entered the industry. Katrina took no time in learning Hindi and now dubs for her own movies. She also learned dance forms like Kathak to retain her demand in the industry.This actress has so far acted in over 30 films so far and has many box office hits to her credit. Some of her popular films are Sarkar, Maine Pyar Kyon Kiya, Namastey London, Welcome, Singh Is Kinng, New York, Rajneeti, Race and Zindagi Na Milegi Dobara. Apart from Hindi Movies, Katrina has also acted in Telugu and Malayalam films. She also has done many item numbers in movies. Before appearing on movies, Katrina Kaif was a model. She started modelling at the age of 14 and has done many commercials. Some of her popular commercials include LG, Cola, Fevicol, Lakme and Veet.This attractive actress is also officially India's first Barbie girl. Katrina replaced Aishwarya Rai Bachchan and became the face of Barbie. She is also one of the most searched Indian Actresses on Google. Katrina is the only other actress other than Kareena Kapoor who has acted opposite the 3 Superstar Khan's - Salman, Sharukh and Aamir.

Katrina Kaif was born on 16 July 1984 in Hong Kong, to an Indian Kashmiri father (Mohammed Kaif) and an English mother (Susanna Turquotte) both of whom are British citizens and divorced now. Her birth name is Katrina Turquotte. She took the surname Kaif as it was Indian in origin to establish herself as an Indian Movie actress. Katrina has seven siblings; a brother and six sisters. Katrina was romantically involved with Salman Khan earlier and now with Ranbir Kapoor. This couple may get married by the end of 2016.

Given below is a list of her top 10 best movies.

Katrina Kaif Barbie Doll Ad - I can be a Movie Star

In Maine Pyaar Kyun Kiya, Katrina Kaif played the role of Dr Samir’s (played by Salman Khan) girlfriend Sonia who has a suicidal tendency. When Sonia finds that Samir is in love with Naina (played by Sushmita Sen), she gets married to her friend and neighbor Pyare (played by Sohail Khan)who is in love with her. The movie was the adaptation of the 1969 Hollywood movie Cactus Flower. Maine Pyaar Kyun Kiya was directed by David Dhawan and produced combinely by Seema Kar, Sohail Khan and Dhilin Mehta.

In Namastey London, Katrina Kaif played the role of Jasmeet, daughter of NRI Manmohan Malhotra (played by Rishi Kapoor) who forcefully gets her married to Arjun Singh (played by Akshay Kumar) during their visit to India. Jasmeet returns to London and refuse to acknowledge her marriage with Arjun. She decides to marry her friend Charlie Brown (played by Clive Standen) but realizes her love for Arjun and returns to him. This film was directed and produced by Vipul Amrutlal Shah.

Rajneeti was a Box office success and Katrina won the Star Screen Award for Best Actress for her role in the movie.

Katrina Kaif played the role of Sanjana in the 2007 Bollywood comedy film Welcome. She is the sister of Don Uday (played by Nana Patekar) and is in love with Rajiv (played by Akshay Kumar). Rajiv’s Uncle Dr. Ghunghroo (Paresh Rawal) objects to the marriage between the couple as he had given word to his sister to keep Rajiv away from criminals. The film also has Anil Kapoor, Nana Patekar, Feroz Khan and Mallika Sherawat in important roles.

Welcome was Directed by Anees Bazmee and Produced by Firoz A. Nadiadwala. This film was a Blockbusterand was the last film of the Bollywood legend Feroz Khan.

In New York, Katrina Kaif played the role of Maya who is married to Samir Sheikh (played by John Abraham). Omar (played by Neil Nitin Mukesh) who is a college friend of the couple is set up by FBI Agent Roshan (played by Irrfan Khan) to spy on Sam who is suspected as a terrorist. Maya and Omar convinces Sam to leave the world of crime but is shot dead by the FBI. New York was Directed by Kabir Khan and Produced by Aditya Chopra of Yash Raj Films.

New York was a box office hit and was received well by the audience and critics.

In Ajab Prem Ki Ghazab Kahani, Katrina Kaif played the role of Jennifer Pinto aka Jenny who is in love with her college friend Rahul Jalan (played by Upen Patel).She meets the happy go lucky Prem (played by Ranbir Kapoor)who falls in love with her. When Prem finds about Rahul, he is heartbroken. Jenny realizes Prem loves her while Rahul had only liked her and marries him. Ajab Prem Ki Ghazab Kahani was directed by Rajkumar Santoshi and produced by Ramesh S Taurani. Salman Khan appears in a cameo in this film.

Ajab Prem Ki Ghazab Kahani was a super hit at the box office and was received well by the viewers.

Zindagi Na Milegi Dobara tells the story of three childhood friends who meet up in Spain to celebrate the bachelor party of one of them and try to recreate old times. In this film Katrina played the role of Laila who is a diving instructor who falls for the workaholic Arjun(played by Hrithik Roshan) who is grieving for his lost love. Arjun and Laila express their feelings for each other and gets married to her at the end of the film.Zindagi Na Milegi Dobara was directed by Zoya Akhtar and produced by Farhan Akhtar and Ritesh Sidhwani. This movie also has Abhay Deol, Farhan Akhtar, Katrina Kaif, Kalki Koechlin, Naseeruddin Shah and Deepti Naval.

In Mere Brother Ki Dulhan, Katrina played the role of Dimple who falls in love with her grooms brother Kush (played by Imran Khan). When the couple realizes their love for each other they come up with several plans to get married but fails. They succeed in reconciling Kush’s brother Luv (played by Ali Zafar) with his ex-girlfriend Piyali (played by Tara D’Souza) resulting in Luv eloping with Piyai. To protect the respect and pride of their households, Dimple's father Dilip Dixit (played by Kanwaljit Singh) and Kush's grandfather Colonel (played by Parikshat Sahni) decides to get Kush and Dimple married. The couple agrees to get married on condition that Luv and Piyali would be accepted back into the house. Mere Brother Ki Dulhan was directed by Goks Nair and produced by Aditya Chopra.

Mere Brother Ki Dulhan was a box office hit and was received well by the viewers.

Race is a 2008 Bollywood suspense thriller film. In this movie Katrina Kaif played the role of Sophia, the beautiful and innocent looking secretary of business man Ranvir Singh (played by Saif Ali Khan). Sofia has a secret agenda which gets revealed at the end of the film. This movie also stars Akshay Khanna, Bipasha Basu, Anil Kapoor, Sameera Reddy, Dalip Tahil and Johnny Lever. Race was directed by Abbas-Mustan and produced by Ramesh S. Taurani and Kumar S. Taurani.

Race was one of the biggest Bollywood hits and has many super hit songs. Following the success of the film, a sequel to the movie by name Race 2 is made. This movie stars Anil Kapoor, Saif Ali Khan, John Abraham, Deepika Padukone, Jacqueline Fernandez, Ameesha Patel, Sanjay Dutt and Chunky Pandey.

Partner is a 2007 Bollywood film inspired by the 2005 Hollywood film Hitch. In Partner, Katrina Kaif played the role of Priya Jaisingh who is daughter of a wealthy businessman. Her employee Bhaskar Diwakar Chaudhary (played by Govinda) is in love with her but unable to express his love to her as because of her position and wealth. Bhasker seeks the help of love guru Prem (played by Salman Khan) to help him with his love life. However, Bhaskar succeeds in impressing Priya with his own simplicity and non-sense acts with out the help of Prem. After some hurdles, Priya and Bhaskar gets married. Partner is directed by David Dhawan and produced by Sohail Khan and Parag Sanghvi. This film also stars Lara Dutta, Aarti Chabria, Dalip Tahil and Rajpal Yadav.

Partner was a success at the Box office and has many hit songs.

Katrina Kaif Movies Ek Tha Tiger (2012) opposite Salman Khan and Dhoom 3 (2013) opposite Aamir Khan also rank among the highest-grossing Bollywood films of all time. Have I left any of the Katrina Kaif best movies? If you know of any film which deserves a place in this list, feel free to add them through comments.