I am having a list of songs which I hear almost everyday. Before, I used to listen to Bollywood songs, but when I heard the songs of Zain Bhikha, I become a fan of him. I even like songs by Sami Yousuf. In this hub I am going to mention the top 10 Islamic songs according to me and why they are my favorite.

I love the music of this song.Before it was bit hard to understand the meaning of the song, but after hearing it frequently, I clearly got it now.

Whenever I feel lonely, I listen to this song. Each and every word has got deep meaning in it. It gives me strength to live happily, even being far from my family.

Decide which now, Do not Delay

The song reminds me of life after death. It explains, what will happen if we do wrong deeds, don't pray and don't have faith.

In this song, same lines are sung in 4 different languages. His voice is Awesome.

This nasheed has got few Arabic lines and its translation in English. The english part is sung by Sami yusuf. 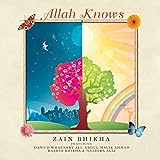 I am a Muslim

This song reminds me my responsibility as a Muslim.

Give Thanks to Allah

There was a rumor that Michael Jackson has sung this song. But this song is actually sung by Zain Bhikha.

This song has got deep meaning. It tells us to be thankful to the supreme being, who has created moon, stars, sun and all that which exist on the earth.

My mum is Amazing

This song is on an orphan girl who thinks about her mother. It is very touching song.It is written by Zain Bhikha

It is an Arabic song. I used to listen to it with my niece ( when she was of 2).It is sung by a small girl but her voice is awesome!!

Islam has given a very respectable position to Mothers. It mentions that, after Allah and Prophet Mohammed (P.B.U.H.), the one whom we should respect is, our MOTHER. This Nasheed has beautifully mentioned that teaching of Islam.