Wet Wet Wet with their gorgeous lead singer Marti Pellow were huge in the 1980s. They had a strong of hit songs that topped the charts, that even today sound fantastic.

The band members were all from Clydebank, a large town situated to the West of Glasgow in Scotland, famous for being home to the first Clyde shipyards and also for being blitzed during the Second World War.

Oh and also because my mother was born and raised there!

Of course, Marti Pellow wasn't his real name. That was Mark McLachlin who'd been a school pal of Tommy, Graeme and Neil when the group first formed in 1982.

At that time their chosen band name was Vortex Motion, but they later changed it to Wet Wet Wet.

I wonder why they were named Wet Wet Wet? Could it have anything to do with typical Scottish weather?

Apparently not, according to wikipedia it was taken from a Scritti Politti song called getting, Having and Holding.

A year later they were joined by the second member called Graeme, Graeme Duffin.

That must have been confusing! Graeme Duffin, although a brilliant guitarist, was a stutterer and is a member of The British Stammering Association Scotland where he actively helps others with the same affliction.

This possibly explains why Graeme Duffin was not seen on the band's publicity posters or interviews in their earlier years.

Love is All Around - Wet Wet Wet (live)

They did a brilliant version of the Troggs' classic number.

A wee special mention here to JimmytheJock, a fellow hubber, who let it slip that this song was played at his wedding. All together....Awww!

On thing I really like about Wet Wet Wet is that when they sing a live number, it comes to life in a way their recorded songs don't, without losing the timing or notes of a song.

Too many artists sing differently live, making it harder to sing along with, but not the Wets. They do justice and more to every live number, and this video of them singing Love is All Around is no exception.

By they way, I would love it if someone could tell me where the Wets were playing in this video. It's a football stadium but I don't know where.

I was there. I was at Glasgow Green somewhere near the front when this video was recorded.

I seem to remember I took loads of folk to the concert ( I was a taxi driver), then went and parked up and walked back myself. I also walked straight to the front - maybe about 6 back from the stage and just stood there in awe!

Wow! If you think the video is good, the atmosphere there was GREAT! What a band!

Sweet Surrender was their new single which according to wikipedia was not released until the 25th of September, 1989, yet here they are singing it on the 10th of September that same year, with all the crowd singing along.

Don't look at me! I don't remember! Loved it anyway!

Ahhh...Temptation! There was a lot of temptation put in front of us women that day on Glasgow Green - or night i should say, it was dark.

This song is just so sexy, and the way Marti sings it is wonderful! Knees giving away at the thought. Thank goodness I am seated typing this!

This is fantastic bluesy number and if you ever thought Marti Pellow was just another pop singer, listen to the video here and see if you still think that. That man has a great voice!

This was the 4th and final single released from the Wets first album, Popped in Souled Out, released in March 1987.

In November 1987, Angel Eyes (Home and Away) was released. It reached #5 in the UK charts and helped cement Wet Wet Wet's reputation as one of the best bands around at the time, if not THE best!

I thought they were wonderful - did I mention that already?

I really am using up all my limited bandwidth watching and re-watching those videos, because I simply had never seen them before.

I didn't especially like Marti Pellow's long hair style that he developed for a while, but I've got to watch that cute smile once more.

Marti has had a very long term relationship with beautiful Eileen Catterson, a former Miss Scotland.

This one wasn't recorded at Glasgow Green.

Goodnight Girl was the first #1 hit that the band wrote themselves.

It was released in December 1991, just in time for the Christmas market, and came from their fourth studio album High on the Happy Side, which seems a bit incongruous when Marti Pellow went on the develop a heroin addiction.

This was much later in his career and he spent some time in rehabround about the end of millennium.

He is now clean and has been for several years.

#6 With a Little Help From My Friends - Wet Wet Wet

This Beatles cover version of With a Little Help From my Friends went to #1 in the UK in 1988.

Wet Wet Wet recorded this single and donated the proceedings to the charity Childline, which is a UK charity that helps children in trouble, or children who are being abused, by providing them with a help hotline phone number that they could call for free whenever they needed help.

This was the Wets 1st number 1.

Back at Glasgow Green for this live version of the hit single Sweet Little Mystery and I am falling in love all over again!

Released on July 20, 1987, Sweet Little Mystery was the second single taken from the album Popped In, Souled out.

It reached #5 in the UK charts. 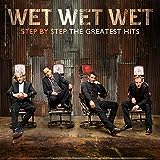 The first hit song Wet Wet Wet had was Wishing I was Lucky in 1987.

I'd started driving taxis round about 1986 so I'm not sure when I fell in love with Marti Pellow. Of course I was married and had a young family at the time, but a girl can dream!

Wishing I Was Lucky reached #6 in the charts. From the same album, entitled Popped in Souled Out came Sweet Little Mystery, Angel Eyes and Temptation.

That was it. I was hooked!

In 1988 came the Wets' cover version of the Beatles hit "With a Little help from my Friends" which netted them their first #1.

I wasn't that impressed with it, still being enamored with the Joe Cocker version which I think is kind of hard to beat.

In 1989 came Sweet Surrender and Wet Wet Wet put on a free show at Glasgow Green which I attended.

That was just magic! The band was fabulous - the sound system perfect, and I was in 7th Heaven!

Hold Back the River was released in March 1990, but only reached #31 in the UK charts, which was a shame because this is a cracking song!

It came from Holding Back the River, which was Wet Wet Wet's third album.

Their next big hit didn't come along until Goodnight Girl in 1992, followed by Love is All Around in 1994.

The band went through a period of turbulence with Marti's heroin addiction plus various other band members suffering alcohol problems and usual pop/rock band stuff like petty disagreements, and they did split up for a while.

However, in 2004 they got back together again and after doing a few concerts together they released the album Timeless in 2007.

Weightless was one of the tracks released as a single and it reached #10 in the charts, which is where I am placing it here.

Did you think Wet Wet Wet were fantastic too?