Since the late 60s progressive rock bands have left music fans and critics flabbergasted with their complex brand of music. The 70s saw a splurge of English bands taking the progressive route. The popularity of progressive music was significantly high in the 70s. However with the 80s came glam rock, disco, hard rock, and punk amongst other genres all of which gained prominence. The progressive scene seemed to fade away in the 80s but made a powerful comeback in the 90s, and until now has remained a popular genre with musicians that love complex music structure. The new prog rock bands that emerged in the 90s had a heavier sound as compared with bands from the 70s. 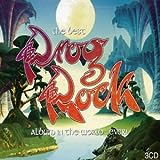 Best Prog Rock Album in the World Ever
Buy Now

A number of prog metal bands came up in the 90s. Since the late 90s Scandinavian prog metal has dominated the music scene, and it seems just the beginning. Sweden, Norway, and Finland boast of some of the finest melodic prog metal bands. Concepts, lyrical themes, melody, and harmony form an integral part of progressive rock albums. Progressive rock and progressive metal draws its influences from a wide range of genres. The thematic lyrical compositions infused with technical accuracy of instrumental parts makes progressive metal hugely popular with audiences from various rock genres. A person listening to a progressive band for the first time may find the music obscure; however, you gradually acquire a taste for concepts and thematic compositions.

If you love prog rock, you will have an opinion. It was no easy task to compile a list of just 100 progressive rock bands and progressive metal bands. Keep this list alive. Feel free to have your say in the comments section.