Who would've thought way back in 2002 that a little brand-new singing competition show on Fox would still be chugging along for 13 years. To many people's surprise - it is - and this season American Idol celebrates its baker's dozen year with a fresh feel to the judges panel, primarily due to new addition (and two-time mentor) Harry Connick, Jr. joining sophomore Keith Urban, and returning judge Jennifer Lopez.

Idol has suffered declining ratings over the last six seasons for various reasons. But despite the fact that the show kicked off with its lowest ever premiere ratings this year, American Idol XIII seems to be headed in the right direction. The vibe is fun while displaying a new kind of serious - and for all of the right reasons. It has a fresh feeling - largely due to the addition of the three-time Grammy winning jazz artist, and the chemistry that he brings to the panel. Below are reasons why Harry Connick, Jr. just may have saved the day.

Harry Connick Jr has proven himself in his career as not only an talented musician, but also as an accomplished actor. He's clearly comfortable in front of a camera, and the camera loves him back. He also showcases a perfect mix of experience and humility - with sound advice for the contestants and self-effacing humor peppered throughout. As a viewer, you believe him and trust him. That makes for a welcome addition and a more entertaining experience.

For the very first time in Idol's 13-year history, the judging panel is made up of people who actually sing for a living. Perhaps the producers have learned some lessons from The Voice and, to a lesser extent, X-Factor, about the healthy combination of judging and coaching. Connick has the vocal chops to earn a spot at the table...and then some.

3. He has experience with Idol

Harry Connick Jr was a guest mentor on Idol in Season 9 (during the Top 5 week) and Season 12 (during the Top 4 week). In both cases, he made for a great addition to the show - imparting his wit and wisdom to the remaining hopefuls. It was clear that he actually cared about each contestant, and took the time to individualize his teaching - all the while keeping things lighthearted and fun. Those experiences have made his transition to the judging panel a natural step.

Whether you agreed with him or not, Simon Cowell was one of the only judges that wasn't afraid to tell the truth to a contestant. The difference here is where Cowell was snarky, Connick is politely direct. He's not looking to demean or belittle anyone, but he's also not afraid to tell someone quickly and simply that they haven't sung well. It's a refreshing change from the coddling by Mariah, the brashness of Nicki Minaj, and the limited vocabulary of Randy Jackson.

It's a little disconcerting that Jennifer Lopez - with all of her music business experience - isn't familiar with a pentatonic scale. But Harry sure is, and he schooled J-Lo during the very first audition show. Having studied at New Orleans Center for Creative Arts as well as Manhattan School of Music, Connick is quite well versed in music theory. This adds some actual credibility to the panel that, in the past, has largely consisted of celebrities with limited musical knowledge. 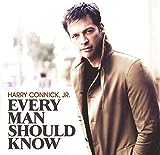 Every Man Should Know
Buy Now

6. He takes it seriously

If you only had the way he focuses intently on a singer to gauge Connick's investment in his job, you'd already have a clear picture of his approach. It's obvious to the viewer when someone is really listening and really cares. It's also clear how much he loves music, and how much he really wants to see singers succeed. As often as he likes to joke around, he also doesn't want to waste time with the ridiculous bad singers that Idol has been so well-known to parade in front of the cameras in the early audition rounds. It seems that he understands what really made the show popular in the first place - that viewers want to find a new, fresh, original and talented artist to root for. With heavy competition in the world of vocal-based reality shows, Idol has stepped up its game by including the best new judge it could ask for.