Music I think is sometimes like football a matter of opinion, and this is my  list of the top albums of the 1970's, and of course in no particular order.

The 1970's was a golden decade for music , with a great variety, and some of the great albums of the era remain timeless.

Released in 1977 , and with sales of over 19 million. Rumours was Fleetwood Mac's 11th and best selling album. It was the groups second album with what must be regarded as it's best ever line up

Stevie Nicks voice is at her very best and huskiest on the love song Go Your Own Way , Which she co-wrote with Buckingham. Singer and Keyboardist Christine McVie wrote the brilliant Songbird, and others.

All the tracks can be regarded as favourites and classics, with Dreams and Don't Stop becoming big hits particularly in the US.

Rumours tracks the two sets of couples(Nicks/Fleetwood and the Mcvie's) as their relationships begin to break down.

Rumours won a Grammy award for the Album of the Year in 1978.

It was also chosen as the 25th greatest album of all time by the Rolling Stone magazine in 2003. 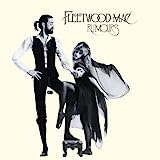 This album has some great tracks, and suits all moods, apart from the obvious hits you can still find a case for each song.

Go Your Own Way is one of my all time favourites, and a time honoured radio song that is always being played . The Chain is a "compilation " of the bands vocals,a catchy song, like most of Fleetwood Macs.It also wows with an outstanding bass solo, and popularised by the BBC as it's theme music for it's Formula One coverage.