I gathered the most important traditional Chinese musical instruments in this hub, providing a description of each one, as well as images and solo musical pieces by famous Chinese folk musicians.

The dizi is a traditional Chinese transverse bamboo flute.

It is closed with a cork at the blowing end and open at the lower end. It has six finger holes and may have a membrane over an extra hole to give a characteristic nasal sound.

The erhu is a traditional Chinese two-stringed fiddle.

It has a long, round hardwood neck with two tuning pegs at the upper end, which is often intricately carved with a dragon head. The lower end of the neck is inserted into a resonator. The resonator can be hexagonal, octagonal, or tubular in shape and is covered with snakeskin (mostly python).

The two steel strings run from the pegs through an adjustable sliding upper nut over a bridge on the snakeskin to the underside of the resonator. They are of different diameters and are mostly tuned a 5th apart. The entire erhu is about 31.5 inches long.

The bow is of horsehair on a bamboo stem. The erhu is held vertically, supported on the left side. The left hand fingers press the strings lightly, never touching the neck, and the right hand operates the bow.

The guzheng is a horizontally played traditional Chinese harp.

It look similar to the Japanese koto with an arched sound board of soft wutong wood, approximately 6 feet long and less than 12 inches wide, and has a sound box. The sides and the bottom of the side box of the guzheng are made of red snadal wood.

The strings are traditionally of silk, but since the 1960s steel or nylon strings have been used. They run across individually movable bridges. The strings of the guzheng are tuned to give three complex octaves of a pentatonic scale. 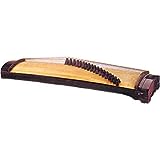 The back shell of the pipa is made of teak, and the soundboard of wutong wood. The frets on the neck are carved from ivory, buffalo horn or wood, and the lower frets on the soundboard are usually of bamboo. The pipa is held vertically on the player's lap, the strings are stopped with the fingers of the left hand and plucked with long fingernails of the right hand.

The sheng is a traditional mouth organ, played especially in central and north China.

It has a bowl-shaped wind chamber with a short blow-pipe. Seventeen bamboo pipes are arranged on the base of the sheng in an incomplete circle. At the bottom of each reed, enclosed by the wind chamber is a free-beating copper reed, attached with wax.

The sheng is played by closing finger holes on the outside of the pipes and by inhaling and exhaling rhythmically.

The Xiao is an about 29.5-inch-long traditional Chinese end-blown, notched bamboo flute.

It has five finger holes, one thumb hole and two or more dorsal holes at the lower end of the xiao, which define the length of the air column.

The xiao has a range of two octaves.

Its shell is relatively flat and trapeziform, covered by a thin wooden soundboard. The strings are arranged in two choirs (left and right) each with between seven and eighteen courses of two to four strings. Near the middle of the yang-qin's soundboard, dividing its length roughly into thirds, are two bridges with alternating raised edges and gaps.

Strings from the right choir pass across a nut, across the raised edge of the right bridge and through the gap of the left bridge to their fastening pins on the left side. The strings of the left choir reverse this. The yang-qin is set on a stand and played with two slender bamboo beaters.

Have you ever been to the concert of a Chinese folk group?