Introduction/My History with the Album

I got to exploring Udo Dirkschneider's solo career before getting into ACCEPT; thinking that UDO was a band to itself; separate from ACCEPT. Only after hearing "Mean Machine" (UDO album) from 1988 did I realise that both bands are connected. UDO impressed me more than ACCEPT's earlier material for their more upbeat and aggressive tracks with fewer ballads to the albums. Hearing ACCEPT's early material later on, (before Marc Tornilo's era) I started to make the connection.

UDO went on to create some of the most varied yet consistent discographies of traditional heavy metal which transitioned from decade to decade; picking up elements from all genres of metal as they progress.

Around the late 1980s, ACCEPT released the album "Russian Roulette" and were enjoying critical and commercial success; going on world tours in support of their albums; with the "Metal Heart" tour in 1985 and a performance at "Monsters of Rock" festival in 1984. In 1987, the vocalist Udo Dirkschneider decided to embark on a solo career (possibly due to creative differences) and "Animal House" was born; written by ACCEPT's songwriter as a parting gift. Today, UDO (the band that effectively started as a side project of the veteran vocalist Dirkschneider) is a powerhouse in modern heavy metal with 22 albums, several tours and more announced for late 2017. The band in question has a varied discography which includes speed metal, traditional heavy metal, power metal, and some thrash metal.

The Last Album with Udo Dirkschneider

The ACCEPT album that could have been but done by the former frontman as a side-project instead, Animal House has lot's of hints/nods to the original lineup; be it spine-chilling guitar stings that Wolf Hoffmann invented and perfected or the thumping rhythm seen in prior ACCEPT offerings; all the good albums combined. That said, I think that slower, ballad tracks are hit or miss when done by ACCEPT or Udo himself for that matter since they hamstring the mostly fast collection of tracks which have elements of speed metal to them. Unfortunately, the ballad here wasn't written up to ACCEPT standards.

The record kicks into high gear on side A with highlights galore; from the loose and roaring title track with Udo's vocals harmonising perfectly with the piercing guitar solo as the track picks up speed and gallops to a satisfying climax; right to another standout "They Want War" which for me is the track I enjoyed the most for its sincerity and sense of melody with a melancholic start and nerve-pulling flow that never gets old and would be in your head to kingdom-come. "Go Back to Hell" is another standout where the slower overtures fit the galloping rhythm perfectly with tandem leads from the guitar that compliments the aggressive message Udo tries to present. Production quality-wise, the record is reasonably metallic with clarity on music but lo-fi and gritty on bass and rhythm guitars; sounding like most good classic metal records do.

The weaker tracks, as said at the start are ballads such as "In the Darkness" which may be musically high-quality but just didn't click with me as it felt out of place and more like filler than a track that the band cared about. "Black Widow" is another such track but not a ballad; the catchy guitar solos and galloping choruses but still feels like filler albeit a fun one. Overall, this is a good album that I had fun listening to since it has the ACCEPT flavor with the legendary frontman's own input to have its own identity. Sure it has some filler but one track won't stop me recommending this record highly to not only ACCEPT fans but also other metalheads who enjoy traditional heavy metal and speed metal.

Overall, this is a fun album which is a combination of all the classic ACCEPT musical sensibilities with some unique elements to give the album its own sonic identity. While it was technically written by ACCEPT, Udo has a lot of creativity of his own which staked his claim in the world of heavy metal; a push which furthered the vocalist's career. "Animal House" is a must-listen for fans of not only ACCEPT but classic heavy metal because it leads to the works of one of the most talented vocalists of the classic period of the genre. 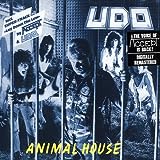