It's hard to believe that the Titanic sank over a century ago, yet her sinking still fascinates us.

There have been so many movies based on her sinking it's hard to decide which should be told, but, I'm not going to talk about the Oscar winning Titanic (in order to do this column I didn't want to book passage again) so here are a few Titanic movies you may not have seen.

One of the earliest is A Night to Remember which came out in 1958. It's a good movie (and some good special effects for that time) and doesn't really follow a storyline. We know the ship will sink and there's not a lot of fanfare as to who the characters are. They could be termed as "every man/woman". The movie shows the days before and during the sailing, along with various passengers on board the doomed liner.

Unfortunately the original Titanic set up the drama for any telling of the story and that fateful night. This first version follows the Sturges family (mom Julia -Barbara Stanwyck - dad Richard Clifton Webb) and her plans of taking the children Annette and Norman back to Michigan for a regular life.

In this version none of the real people on board are mentioned but Thelma Ritter (Maude Young) is undoubtedly Molly Brown.

But Molly Brown is a celebrity and she's predominately portrayed in a lot of Titanic movies (with the exception of the original Titanic as mentioned above).

Prior to the 1996 version(s) the last time the Titanic sank was in 1978 in S.O.S Titanic a television movie which did depict actual passengers and Cloris Leachman was Molly Brown (Marilu Henner below). The problem with this movie is it's too much of a drama leading up to the sinking by focusing on various people in the different classes. In this version you really don't care about the characters, but it's one of the first to show the survivors climbing aboard the Carpathia.

So years go by and before James Cameron's Titanic there was the mini-series Titanic. This was loaded with drama which primarily focused on the relationship of Wynn Park (Peter Gallagher) and Isabella Paradine (Catherine Zeta-Jones). This was supposed to be the mini that sank the already sinking Titanic.

This is a good mini series and while I'm staying away from the Best Picture of 1997 I can say that both (or all Titanic movies) are too melodramatic.

A Night to Remember
Buy Now 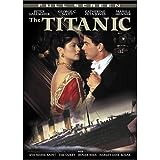