Voices of Ruin (on this album) are:

Voices of Ruin - Into Oblivion

Voices of Ruin are an independent melodic death metal/melodeath band that started their career with crushing it on the highly competitive Southern California metal scene since 2007 - gaining notoriety through their well-received live performances and later on, recording their first full-length album: Into Oblivion. Rarely does an album (a debut one at that) have so many standouts to the point of being deemed "perfect." However, Into Oblivion is one such rare album where the band's hard work and experience show in every riff, solo, and even vocal delivery. Well produced by engineer/producer Chris Eck.

In the modern metal scene, it's no longer enough to be influenced by the genre's classics; you have to go a step beyond to add your own touch to your inspiration. Voices of Ruin, hence is a great band because they found a way to fuse At The Gates, 1990s era In Flames and some Dark Tranquility style melodeath and thrash metal from the 1980s while making the songs themselves be a highlight reel of the best of all worlds. Going above and beyond to stand out from other bands. Finally, Voices of Ruin nails in transporting the catchy rhythm of NWOBHM (a big inspiration in melodeath bands) complete with memorable hooks to death metal with the genre's conventions in tact.

Starting from the title track, the band shows it's thrash influences with fast riffs and blast beat drumming; all that punctuated by solos and some of the best harsh vocals I heard in death metal period. Deeper and harsher than some traditional death metal bands I heard. Already, we can see that Voices of Ruin took the rawness and aggression of thrash metal and removed the flaws with technical precision - like a K9 handler who has the primal power of his partner under total control - unleashed only at the right time. Finally, Dark Passenger is also a track where the album is at its most thrash - straight from the opening and right to the middle riffs, vocal and percussion rhythm.

We heard In Flames' solos on tracks such as Stand Ablaze and December Flower; now take that technical precision, hooks, and melody and apply to a heavier, more brutal band who plays faster and has darker lyrics. Lost In A Dream is one of the many examples of this where the melody is made heavier by consistent drum parts as the solo shreds through the rhythm guitars - giving you a feeling of audio synergies and harmonising everything perfectly.

Finally, This Hell, a track so great it warrants its' own paragraph - very thrash, very melodic and aggressive. The solo especially - shredding for a long time but sounding and feeling intense. Commencing after a breakdown of riffs that won't feel out of place on a Sodom record.

Voices of Ruin will be a household name for all metalheads and this album should already be in your library as it not only adds many new elements to the melodeath sound but follows the rule of making such hybrid genres (e.g. melodeath, metalcore) awesome - keeping it fresh with own musical input with full respect to the classics.

Metal is a genre whose music takes a lot of skill, talent, and creativity to make, therefore, a debut album would have flaws 99% of the time. Voices of Ruin is an exception to this rule where they made a flawless debut album with no dull moments or filler to mock. You would always be headbanging to the collection of tracks I can randomly namedrop and you will remember them since all are memorable and intense. Painting epic mental images and giving your imagination a heart-pumping time.

Heavy, aggressive, melodic and raw is the band's debut album. Also, If you are among those metalheads who want the old Gotheborg sound to gain prominence again, Voices of Ruin is the perfect band for you. 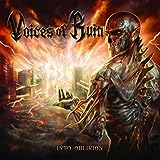