What makes you laugh out loud?

The best medicine they say! But really, who is "they?" How to they know? Apparently there is a connection between laughing and the healthy functioning of blood vessels. That link was reported back in 2005 where researchers from the University of Maryland found that laughing causes the dilatation of the inner lining of the blood vessels and increases blood flow.

According to Wikipedia, "Doctors. Michael Miller (University of Maryland) and William Fry (Stanford), theorize that beta-endorphin like compounds released by the hypothalamus activate receptors on the endothelial surface to release nitric oxide, thereby resulting in dilation of vessels. Other cardioprotective properties of nitric oxide include reduction of inflammation and decreased platelet aggregation."

In English that means that laughing can release NO (nitric oxide) into the body and that can help with blood flow which results in more nutrients flowing freely... and I'm sure a few gentlemen perked up when I mentioned blood flow! That also means good things for your ticker too.

I know on multiple occasions where laughter has eased a tense moment, relieved stress, made a good opener, closed a deal, etc.

I don't remember where but I read something about a Cancer survivor crediting watching funny movies while going through treatment with being the main thing that allowed her to get better. Never mind, the science for a second, just take a look at how a good positive outlook will help improve any situation. Laughing releases endorphins which can elevate feel good hormones and improve overall quality of life!

Some "inappropriate" material may be found in this Hub. Although I don't necessarily agree with all of the opinions stated here in, it can not be denied that they are funny! If you are easily offended or have an overactive ego my suggestion to you is to move on to a more gentler Hub...

These are in no particular order and no one comedian here is "funnier" than the rest. The premise here is simple, I am simply answering the question, "What makes you laugh out loud?"

Something about dry whit and sarcasm just sits well with me.  Always enjoyable to watch the defiance. 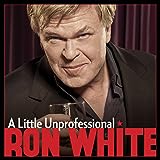 Born in 1956 in Fritch, Texas, Ron White served his country in the United States Navy where he earned the nick name "Tater Salad" which would later become a classic story in his routine. He always dreamed of being a comedian and after he completed his service in the Navy set forth pursuing his dream.

In the State of Texas, April 27 is Ron White Day. He has also received the Armed Forces Foundation Patriot Award for helping to raise money for wounded soldiers.

On a personal note, the first time I saw Ron White's act, it was during a down time in my life and his humor, whit, sarcasm, and stories resulted in full belly laughs that I has not done in quite a while.

They say laughter is the best medicine. Ron White cheered me up, cracked me up and that in itself is better than any antidepressant on the market! Thank you Ron!

My God bless him and forgive him...

Why We Don't Suck: And How All of Us Need to Stop Being Such Partisan Little Bitches
Buy Now

Comedy comes in many different forms.  I like Denis Leary for multiple reasons...

Clearly, we must be related somehow.  Denis Leary is also a very genuine actor.  Watch some of his movies or check him out on Rescue Me and you'll know what I mean.

His comedy is brass.  It's between the eyes.  He pulls no punches and tells it like it is and I believe that even in the throws of his loudest outbursts and raving, Denis Leary speaks from the heart and that is something, whether you agree with what's spewing from his pie-hole or not, is something to appreciate and admire as authenticity is rare in this world.

However, the main reason I'm a fan is my buddy Doug introduced me to him and got me to listen to him.  He made me watch No Cure For Cancer and for me that was it.  Hooked, line and sinker.  FAN.

His humor struck a cord as his whit and direct punch line seemed to match many of my own points of view with one exception; Denis Leary was 10 times the intensity and commitment of my own.

Is there any reason why this is not funny?  Well, maybe to David Caruso...

Jim Carrey... I mean really, how over the top is this guy? Seriously, this is what it takes. You're always better having to bring it down a notch than kick it up. Jim Carrey is the perfect example of that. From Fire Marshal Bill to Ace Ventura Pet Detective, Jim Carrey shows us how taking it to the limit can be the key to success.

My favorite Jim Carrey story is how when he was getting started he wrote himself a check for One Million Dollars that he kept with him as motivation to not give up and continue pushing forward and reaching towards his dreams.

There must be something about comedians named Denis... or Dennis... or... uh... wait, I can only think of two... whatever!

Dennis Miller got rolling doing Weekend Update on Saturday Night Live. At least, that's how I discovered him.

This Dennis also turned out to be a comedic favorite of mine along with my aforementioned buddy Doug. I think if Doug and I could have beamed ourselves into the bodies of the two Denis' (insert additional "n" where needed) for the day, I'd have been Leary and Doug would have been Miller. From there we would have torn up the town in a cloud of cigarette smoke and sarcasm...

Some people have Lucy, others M.A.S.H. For me, it's Seinfeld.

The series finale was in 1998.  It's still on in syndication.  I still watch it almost daily.  12 years later, it's still on, I'm still watching it and I'm still laughing my ass off.  'Nuff Said...