My scary movie isn't one that most people would probably choose: It's Jaws.

From the time I was a little girl, I was afraid of fish. If I even saw a goldfish on TV, I would run out of the room. I tried snorkeling one time in St. Thomas but almost walked on water to get back to dry land when the instructor's fin accidentally touched my leg underwater. (The thought of a fish touching me was way too much to bear.)

Jaws came out when I was 16, which will reveal my age to anyone with even rudimentary math skills. Since drive-in movies were still in style then, my roommate and I went to our local drive-in to see the movie. I spent almost the entire film sitting backwards in the front seat, occasionally turning around to see what was happening on the screen. It was uncomfortable, but I knew it was the only proven way to avoid on-land, drive-in-movie-theater shark attacks. 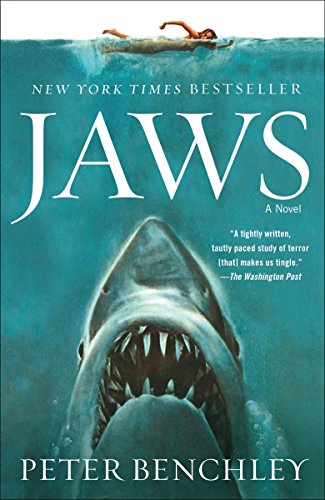 Could there be anything more terrifying than swimming in the ocean and have something eat you while you thrash and scream? I can't think of much that could be worse than that. Whenever I think of Jaws, I think about that poor woman being tossed around in the water while God-knows-what was going on underneath. Ugh. I know she was fictional, but because the image plays into a primal fear of mine, it really stuck.

I'm better about my fear of fish now, but I still make sure I have a pillow handy if Jaws is on; I never know when I'll need to hide my eyes.

Here are some movie reviews I wrote about films that don't scare me:

And here's my movie blog: