Why Ralphie Was Destined to Shoot His Eye Out

"You'll shoot your eye out," is one of the most popular Christmas movie catchphrases of all time. It's now used for everything from a word of caution from overprotective parents, to lewd innuendo that has no relation to a Red Ryder carbine action two-hundred shot range model air rifle with a compass in the stock. Anyone who has seen this movie knows that yes indeed, Ralphie certainly does shoot his eye out -- and it was inevitable, for several reasons.

Ralphie's language could make sailor children blush with shame. He didn't just say a bad word, he said the queen-mother of dirty words. The "eff-dash-dash-dash" word. The big f-bomb. And when confronted by his parents about where he heard the word, what did he do? He lied about it! That's right, he blamed one of his friends.

Later on in the movie Ralphie gets into a fight. During the scene, adult Raphie narrates:

"I have since heard of people under extreme duress speaking in strange tongues. I became conscious that a steady torrent of obscenities and swearing of all kinds was pouring out of me as I screamed."

It's a wonder he even got the BB gun at all. He could've wound up with a stocking full of coal and stitches! His language alone should have been an indication that putting a weapon in his hands was asking for tragedy to strike. 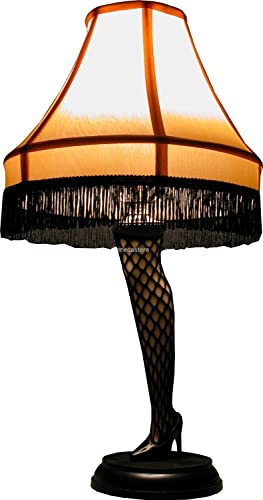 That major award Mr. Parker won was neither Italian nor the deed to a bowling alley. For those of you who haven't seen the movie, it was a giant, hideous, cheap plastic lamp in the shape of a woman's leg wearing a fish-net stocking and high-heeled shoe. Much to the chagrin of his wife, the lamp took front and center in the front room window.

Ralphie's parents bickered incessantly over the lamp. His mother would unplug it before leaving the house, while his father was just as quick to plug it back in where anyone outside walking past the house could see the lamp blazing forth in "unparalleled glory." Finally, while watering the plants, Mrs. Parker knocked the lamp to its death. Her husband tried piecing it back together to no avail, and finally buried it in the back yard.

Parental recklessness leads to child recklessness. With that kind of blatant disregard to contributing to the delinquency of a minor, there's no way that Ralphie was going to escape shooting his poor eye out with his BB gun.

I triple dog dare ya!

Ralphie was a terrible friend.

The first example we see of his poor friendship skills is on the playground when someone triple dog dared Flick to stick his tongue on the frozen metal post. After the fire department came to the rescue, Adult Ralphie recalled how their teacher admonished the class asking if they felt remorse over what they'd put Flick up to doing out there. His reply certainly didn't imply anything close to being a loyal friend.

Adults loved to say things like that but kids knew better. We knew darn well it was always better not to get caught.

Hmph. Bad things happen to people who are bad friends. I'm not saying Ralphie deserved shooting his eye out, but I certainly never felt any sympathy for the guy. Not to mention, the kid lied like a rug to his parents! When Mrs. Parker asked him what happened, he said an icicle fell off the garage roof and smacked him in the face. As if.

In conclusion, it's pretty obvious that from the opening scene, Ralphie's fate was more than a little predictable. The moral of this heartwarming Christmas tale is, you can lie to your parents, ditch your friends, and have a dirty mouth, and Santa might still bring you what's on top of your wish list anyway. But it doesn't mean that karma won't come back to bite you in the arse.

Or shoot out your eye.