Women in Business. Female Entrepreneurs of the 20th Century

Mary See was actually an important partner in the company that is known today as "See's Candies". Mary's son, Charles See helped his mother get the business off the ground and become the huge success that it is today.

Mary See developed the recipes that would become the foundation of the See's Candies corporation and her son Charles and his wife Florence opened the first See's kitchen. Mary was running a hotel and had little time to help run the candy business. She allowed her recipes, ideas, and image to be used by her son, and he took care of the details.

The family became minor celebrities and familiar faces up until the 1960s when Charles See's son underwent a very high profile divorce which ended in a massive community property settlement.

One of Elizabeth Arden's Famous Reds

She was born in Woodbridge Ontario Canada with the name of Florence Nightingale Graham in 1884, and after dropping out of nursing school she moved to New York to live with her brother. It was there that Miss Arden got a job in a Pharmaceuticals Company and took an avid interest in ingredients and cosmetics.

She then moved on to become a treatment girl for Eleanor Adair, a early beauty expert, and formed her first partnership in 1909 with Elisabeth Hubbard, a chemist. It was when the partnership ended that she began using the name Elizabeth Arden, and opened her first beauty salon in 1910 on Fifth Avenue.

Elizabeth Arden was a true entrepreneur who traveled to France in 1912 to learn how to do a European facial and to gain knowledge of the beauty products that were being used in Paris salons. Her famous mantra was that to be beautiful was the birth right of very woman. Her belief in beauty was to make every woman the best she could possibly be in grooming, poise, and makeup. Elizabeth Arden was a woman decades ahead of her time as she preached that beauty comes from diligent skincare, good nutrition and regular exercise, and encouraged women to learn how to apply makeup well to give herself a professional image and a lady like appearance. By 1915 she had operations in the U.S. and Europe.

She believed that women needed to empower themselves and therefore her politics were conservative and she always supported Republicans stating that the democratic party makes woman, along with other minorities weak by victimizing them and arousing resentment. Miss Arden's parents were British and Arden took advantage of her opportunity to reach the American dream and refused to use the fact that she was a female be an excuse for failure.

Arden sought out to make the absolute best products and soon developed the Eight Hour Cream, Blue Grass Fragrance, and three basic shades of red lipstick. A pure red, and orange -red and a blue- red.

By the 1930s Elizabeth Arden had opened many Red Door salons in just about every cosmopolitan city in the country.

In the early 1960s she was honored in France with the Légion d'Honneur for her contribution to the cosmetics industry.

Elizabeth Arden passed away in 1966 and is remembered for pioneering both an empire and an industry. 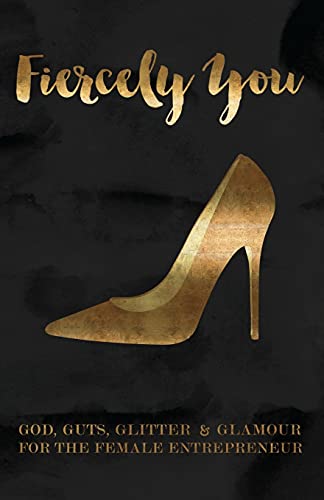 Fiercely You: God, guts, glitter and glamour for the female entrepreneur
Buy Now

Jenny Craig was born Genevieve Guidroz in 1932 and raised her children in the 1960s. It was during this time that Jenny battled weight problems. Jenny got a job in a local gym called Body Contour Fitness Salon in New Orleans and met her future husband, Sidney harvey Craig. She soon became the director of the gym, and then became the operations manager. It was not long before Jenny opened a gym of her own. Jenny Craig had learned plenty through her own weight loss program and specialized diets.

She then developed a menu and diet plan to meet USDA regulations and became almost as popular as Jack Lalanne in the 1980s.

Mary Kay Ash was born in 1918 and married at the age of 17. The couple had three children and when Kay's husband served in World War II she sold books door-to-door. Soon after her husband returned from war they divorced in 1945.

Mary Kay went to work for Stanley Home Products where she was passed over for a promotion that she felt sure she deserved. She was so outraged when a man she had trained was given the promotion that she was more qualified for. Mary Kay did not want to become bitter, she was an entrepreneur who wanted her downfall to somehow turn into a profit.

After retiring in 1963 she fully intended to write a book to aid women in business and the workplace, however, she changed her mind and decided that she and her new husband, George Arthur Hallenbeck, would launch their own cosmetics company. Hallenbeck suddenly died of a heart attack and Mary Kay continued with the plan.

Mary Kay Ash became deeply respected and considered the golden Rule to be helping women succeed. She stuck with her old fashioned values and her business plan is focused not just solely on finances, but on clean living and doing the right thing.

Coleen Moore was born in 1899 and she became a child actress in Hollywood. At the age of 15, D.W. Griffith had recognized her talent and wanted to groom her to be another Lillian Gish, but Miss Moore's talent was being spied by other directors and her career took a different turn. She became a heroine in westerns while still in her teens and then went on to become one of the most famous "jazz babies" of all time. Colleen was one of the first actresses to bob her hair short and wear short flapper dresses. She stared in numerous frivolous movies about wild youth, and what we consider to be the stereotype of the roaring 20s today. When one pictures the image of a 1920s flapper, with short dark hair, bangs, and rolled down stockings, it is the image of Colleen Moore. She is one of the early actresses who helped form the style of the 1920s.

Colleen went on to make hundereds of films from the teens up until the early 1930s. When sound entered movies Colleen was unimpressed and began a romance with a prominent stockbroker named Albert Parker Scott. They were only married for two years but Colleen learned plenty from him. After her divorce she returned to Hollywood but had somehow lost her spark as an actress, and besides, she had other things on her mind, such as the stock market. Her mind had broadened and she no longer had to put all of her energy into being a star.

All three of her movies that were made in the early 1930s flopped. Colleen decided this would be a good time to retire and marry a sensible man and raise children.

In the 1950s she began to invest in real estate and by the 1960s she became a partner in Merrill Lynch. She was very astute at putting financing together quickly and efficiently and after publishing two autobiographies she published another book titled, "How Woman Can Make Money In The Stock Market."

Lucille Ball was a a very successful actress in the 1930s and her popularity and variety of roles were growing by the 1940s. Lucy was living a lifestyle that most women only dream of living, but simply receiving a handsome paycheck by working for someone else as other actresses do, was not enough.

Lucy ended up being in the power position. She and her Husband Desi Arnaz, wanted to adopt the general them of a radio show that Lucy was cast in called My Favorite Husband.

Radio had been big business from the 1920s through the 1940s, and now, in the early 1950s, television was clearly taking off and leaving the old radio programs in the dust. Lucy wanted to be in on the new medium but the movie stars she associated with were not in favor of television and viewed it as a major step down from her movies and radio show, but Lucy was in her late 30s and knew that the stage stars of the early 1900s were saying the same thing about moving pictures at the turn of the century. With fierce determination she and Desi built Desilu productions, which is now considered to be a master business in which encased the classic sitcom, I Love Lucy.

Lucy and Desi showed everyone that a television show could be just as slick and well orchestrated as a movie. Four cameras were used which gave a more sophisticated quality to the show than is seen even today. I Love Lucy contemporaries such as The Honeymooners, look stagy and flat by comparison. Lucy and Desi also always used film, and were not tempted to use video tape which is mainly responsible for the show looking fresh and clean even to this day, while other shows of the 50s can appear stretched and distorted.

They had sponsors, hired other writers and shows that would air on a regular basis such as the classic, Playhouse 90. Lucy and Desi owned the company jointly until their 1960 divorce, in which Lucy bought Desi out, and began running it herself. in 1967 she sold the comply to Gulf & Western, and it eventually became part of Paramount Studios.