Kenneth, born and raised in the South, resides in Hamilton, Alabama. He enjoys sharing his unique perspectives on life through his writing.

taking time to look back at The Biggest Rock Music Festival in the U.S.A. and possibly the world, was a massive overtaking, and undertaking—one that took the organizers, producers, and engineers hours day and night of back-breaking work for such an event.

Since what many historians and music experts named “The” Biggest Rock Festival in the United States, possibly the world. Woodstock did not come easily, no. This rock music festival which was billed as an Arts, Crafts and Music Fair to be held in Bethel, N.Y., had opposing critics left and right, but the rebellious, stubborn organizers chose to endure the onslaught of threats from the Establishment and preserve the “storm of negativity.” Organizers of Woodstock were four young men: John Roberts, Joel Rosenman, Artie Kornfeld, and Mike Lang.

Woodstock 1969 began on Friday, Aug. 15, and ended on Monday, Aug, 18. Those headlining and performing in this once-in-a-lifetime-festival, which took place in August 1969, drew about half a million people and was headlined by now-legendary acts like Jimi Hendrix, Janis Joplin, Grateful Dead, Sha-Na-Na, Joe Cocker, Crosby, Stills, Nash and Young, Richie Havens, Arlo Guthrie, Jefferson Airplane, Canned Heat, John Sebastian and many more.

Some music writers and informed-sources all came to the one question: who was going to pay for such a huge venture of this type? Simply put, Mike Lang and Artie Kornfield, resorted to do a lot of begging from major banks and investors just to get Woodstock on the stage. “This was the hardest work that we ever did,” remarked Lang during one of the organizers many Post-Woodstock interviews. 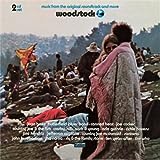 Woodstock (Music from the Original Soundtrack and More)
I remember the day when my 3-record-set of Woodstock came from our Rural Route carrier. I am now 65, and have almost worn-out the grooves in each LP. Woodstock is a personal treasure, you should get one since it is half-a century old.
Buy Now

was given, it took a decade for the Woodstock organizers to turn a profit. All told, Roberts, Rosenman, Lang and Kornfeld spent nearly $3.1 million ($15 million in today's money) on Woodstock—and took in just $1.8 million. Hard work, sweat, blood, and battling The Man every day and night including the local police and State Troopers who threatened to pull the plug on Woodstock as one policeman remarked, “Just a big crowd of crazy kids who take drugs,” and that one sentence was nearly what the adult crowds inside Bethel were convinced that this “legal doping” would be seen and heard over their TV’s.

When the three-day rock music festival began to roll, crowds on foot, automobiles, and motorcycles quickly-flooded what service roads were available to just get to the ticket areas, but the truth came out later in one of the Woodstock organizers who made the stunning announcement, “from now on . . .this is a FREE concert! We will be putting on the music for free. But listen. You are responsible for more than yourself. You are to take care of your brother sleeping next to you tonight in the woods and you better take care of him or else!” It was so strange that a laid-back, hippy-type guy could even forge such Establishment-based words, but he did and it worked.

On a personal note, when I first began a member of a company named, Record Club of America, I joined. Quickly! The membership cost me seven-dollars and eighty-cents and the FREE gift for joining was the three-record set from Woodstock including the stage announcements from the organizers, celebrities, and Mr. Max Yasgur, the man who dared to go against the Law, Bethel, and the world to just have as Yasgur said, “you kids have proven something to the world. You have had three days of fun and music and NOTHING but fun and music,” which was met with thunderous applause from the near-million people in attendance.

And at this time of personal reflection of a production of such planning and sacrifice, I was in the 10th grade at my alma mater, Hamilton, Ala., High School, and all of the whispering and gossip was about one thing: Woodstock.

No words are needed here to allow you an easier avenue of understanding.