Being born in the 1980's, the first Pet Shop Boys' music I came across was their incredibly cheesy 90's music such as 'Go West'. It was only when I was a bit older and I heard some of their more famous 80's tracks that I got into their music and started buying some of their albums. 'Actually' was the first one that I bought and it didn't disappoint.

Originally released in 1987, 'Actually' was the Pet Shop Boys' second studio album and, in my opinion, their best one. The melodies are catchy, the lyrics surprisingly deep and meaningful for electro-dance music and the tracks have all got a great beat. 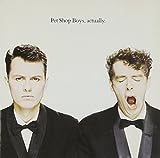 Some of my favourite 'Actually' tracks

My personal favourite song from 'Actually' is 'It's a Sin'. The start of the song is fantastic. You get a NASA countdown followed by some choral music, with a deeply religious, cathedral feel to it. Then a thunder-like explosion hits and you burst into the familiar Pet Shop Boys synthesizer sound. The lyrics to this song really speak to me as well. You can feel Neil Tennant (the singer and song writer) really venting his frustration at a world that keeps seeing wrong in everything he does. The song ends with Tennant reciting part of a Latin mass, adding to the power and anger of Tennant's own lyrics. It is a fantastic song and rightfully reached number 1 in many countries including the U.K.

'It's a Sin' isn't the only reason to listen to this album though. There's 'What Have I done to Deserve this?', a collaboration with Dusty Springfield and another example of The Pet Shop Boy's ability to blend angry lyrics with an upbeat synthesizer pop tune. 'Rent', a song dealing with a one sided relationship where one partner the 'rent' boy of the title is financially kept by his lover is another classic and 'Heart' (the third number one from this album) is a full on electro-dance tune with a fantastic beat.

'Actually' is rightly regarded as a classic album and I would highly recommend it, especially if you have a liking for 80's pop.

The dramatic video for 'It's a Sin'.

What's you favourite single from 'Actually'?