Why I'm making this page about the Almanac Singers

Aside from the fact that they were an American folk music group and I really love American folk music, I'm making this page about the Almanac Singers first of all because they are one of the most overlooked groups in music history, and secondly because they sounded great and thirdly because their songs had both meaning and purpose. The Almanac Singers were started in the 40's by Pete Seeger who just died and Woody Guthery, and they eventually morphed into the Weavers in the 1950s. The group concentrated on songs of protest, particularly for the labor movement which had started in the 1900s with Joe Hill. They sang Hill's songs and those of other protest writers. Read more about their start below, then check out some of their great albums and finally read about their end.

The start of The Almanac Singers: - (info. gleaned from Wikipedia)

In February or March of 1941 The Almanac Singers recorded an album called "Songs For John Doe" on three 78s, consisting of six songs following the Communist Party line urging non-intervention in World War II. This album was short-lived due to Hitlers Attack in June.

Take a listen to the Almanac Singers' first album:

Subsequent albums by The Almanac Singers:

Their second album, released in July 1941, was a collection of six labor songs: "Union Maid", "I Don't Want Your Millions Mister", "Get Thee Behind Me Satan", "Union Train", "Which Side Are You On?", and the eponymous "Talking Union".

Get these great songs by the Almanac Singers on CD:

Later in 1941 they recorded 2 traditional folk albums without political content:

And 2. Their second traditional folk album consisted of Sod-Buster Ballads (songs of the pioneers).

The Almanac Singer's next album supported the U.S. war effort.

Surprisingly (as they had previously concentrated heavily on anti-war protest songs), following the Pearl Harbor attack, the Almanac Singers began singing anti-Hitler songs, and when the U.S. entered the war in Dec.of 1941, the Almanacs recorded a new topical album for Keynote in support of the war effort, Dear Mr. President, It was popular for a while but soon faded as "newspapers began printing stories reminding music fans of the Almanacs' pre-WWII anti-establishment protest songs.See the AboutMusic article in the link list below.. This album is no longer available, but you can download the song from Amazon Mp3:

For a more complete biography of the Almanac Singers, check out these links

Take another listen to the Almanac Singers:

Get both types of traditional songs on this one CD: 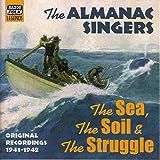 The end of The Almanac Singers: - (info. gleaned from Wikipedia &AboutMusic:) 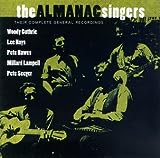 Complete General Recordings
OR Get this COMPLETE RECORDINGS CD. As Amazon says, it " is an essential document of folk music's history and a great chance to listen to these classic numbers in a raw, unadulterated form."
Buy Now

The changing political leanings of the Almanac Singers

According to the AboutMusic article in the link list above, up until World War II, the Almanac singers were quite left-wing in their politics, often serving as a voice for the communist party, but after the attack on Perl Harbor, they were decidedly anti-Nazi.

Was it fair for the Almanac Singers to have to end their career due to their politics?

Please vote in my poll:

Should the Almanac Singers have been forced to quit due to their political leanings?

Why or Why Not?

Tell why or why not. Please tell why you voted as you did in the comment capsule to the right. below. It's only for this. For additional comments, use the 2nd comment capsule below (after "related hubs":)