The Talented Wilson Sisters of the Band called Heart

The band called Heart is a combination hard rock and folk music band that found success in the mid-1970's when sisters Ann and Nancy Wilson joined the group.

Their hits continued strong until the mid-1980's. This band is my all-time favorite band of that era. Strong women role models, the Wilson sisters are the most respected and talented women in rock history.

Ann Wilson and Nancy Wilson showed the world that women can rock just as good as any man band. Heart stormed the charts in the 1970's with hits like "Crazy on You, "Magic Man, "Barracuda, "Straight On, "Even It Up, "Kick It Out," and the list goes on. They continued topping the charts in the 1980's with hits like "These Dreams," "Alone," "What About Love," "If Looks Could Kill," and "Never." During their extraordinary career, Heart has sold more than 30 million records, and had 21 top 40 hits. The Wilson sisters are the only constant members of the original group.

In July 2009, Heart was the special guests on 15 dates of Journey's summer arena tour. They had played at a number of venues, including Louisville's Freedom Hall,Nassau Veterans Memorial Coliseum, the Sovereign Center, Reno Events Center, and Taco Bell Arena. Heart headlined a series of shows when The Bangles opened for them.

Heart Music is available on Amazon

The GREATEST HITS 1985-1995 is available on a audio CD. It is also available on downloadable MP3 versions of each of the 18 songs from this album. You can listen to samples of these songs before you buy, visit Greatest Hits of Ann and Nancy Wilson of Heart blog to check out the CD and MP3's on Amazon.

Debut Album Dreamboat Annie - Success of Heart in the 70s

Dreamboat Annie is the debut album of Heart, released in 1976. Producer Mike Flicker of Mushroom Records, a newly formed Canadian label, helped the group to polish their sound. After a big hit in Canada, Mushroom Records formed a U.S. division and released Dreamboat Annie in the Seattle area. This is where the sisters went to high school after moving around as a military family.

Dreamboat Annie is available to check out

from the blog link above and towards the bottom.

All songs were written by Ann Wilson & Nancy Wilson except as noted:

Out of the songs, "Crazy on You", "Magic Man" and "Dreamboat Annie" released in 1976 were the highest released singles.

Success of Heart in the 70s

In 1977 Heart's record label, fueled rumors that Ann and Nancy were lesbian lovers by running a full-page ad in Rolling Stone, a United States-based magazine.

Showing the sisters bare-shouldered and suggestively captioned "It was only our first time". When a reporter suggested, backstage after a live appearance, that the sisters were sex partners, Ann returned to her hotel room and began writing the lyrics to "Barracuda" to relieve her frustration. The song became one of Heart's biggest hits (#11, 1977).

Join Heart, the revolutionary rock band fronted by sisters Ann and Nancy Wilson, as they bring passion and energy to an explosive 23-song set that touches on every era of their awe-inspiring career--from Dreamboat Annie’s “Magic Man” and “Crazy on You” to the ’80s hits “These Dreams” and “Alone.” Rounding out this definitive live performance are tracks from Heart’s album, Jupiter’s Darling, plus rare covers of Led Zeppelin’s “Misty Mountain Hop” and Elton John’s “Love Song.”

Quick, what do you think of Ann And Nancy Wilson Of Heart?

Top Songs of Heart in the 80s

These Dreams and MTV

The 70's and 80's were the best time for rock music. MTV videos began in America on August 1, 1981, airing rock music videos 24 hours a day seven days a week. There you would see bands with long flowing curly hair from both sexes. Many artists had wild perms to give it that extra fullness. MTV had the immediate interest of 16-24-year-old group. Video TV was responsible for the success of a number of groups, giving them a face and showcasing their music. The original purpose of the channel was to play music videos guided by on-air hosts known as VJs (video jockeys). The 80's were a time for some amazing creative music videos. Several of these told a story along with the music.

Since then, these videos have moved to VH1 classics.

My favorite Heart video and song is "These Dreams", released in 1985. Though the Wilson sisters wrote most of their songs, "These Dreams" was written by Bernie Taupin and Martin Page. Initially intended for Stevie Nicks. But she wasn't accepting outside material at the time. It is the only song that Nancy Wilson is the lead singer.

This song was dedicated (on the album) to Sharon Hess, a good friend of Nancy Wilson's who died of Leukemia. Sharon's sister, Shannon Hess-Terlop, shares the story:

"Sharon was a fan who had a custom, hand made blue acoustic guitar made for Nancy. It was her dying wish to meet Nancy and give it to her. She did get her wish and was able to spend several days in the recording studio with the band while they were working on this album. She died 4 weeks later, on Nancy's birthday".

Nancy Wilson had a nasty cold when she recorded her vocals. The producer liked the raspy sound in her voice, so they kept it. 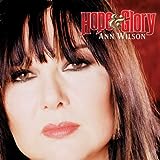 Eight years after her sister, Nancy, released her own solo album, the all-acoustic Live at McCabe's Guitar Shop, Heart's lead singer Ann Wilson takes a center-stage bow with Hope & Glory, a collection of social commentary, message, and protest songs. Mostly covers from the '60s and '70s fleshed out with her own affecting "Little Problems, Little Lies" (told from the point of view of a dying soldier in the Iraq war), the album also happens to be duets with megawatt rock, country, and folk luminaries. Released, appropriately, on September 11, Hope & Glory--produced by Ben Mink (k.d. lang, Feist)--isn't a political treatise so much as an artful account of the suffering and devastation that all war and economic downturn brings. Yet several of the songs are so bombastic (particularly Elton John's "Where to Now St. Peter," with Sir Elton himself in attendance) as to suggest, well, if not the Apocalypse, certainly Doomsday. (Check out Pink Floyd's "Goodbye Blue Sky," one of three songs on which the sisters Wilson harmonize).

Not all the material keeps the focus on Wilson and friends, mostly because the tunes are so intrinsically identified with the original artist (John Lennon's "Isolation," Bob Dylan's "A Hard Rain's a-Gonna Fall," where Rufus Wainwright and Shawn Colvin seem misused and out of place). And though it was always easy to draw a stylistic straight line from Led Zeppelin to Heart, Wilson's treatment of the former's "Immigrant Song" comes across as heavy-handed. She fares much better covering two other bands, the hippiefied Youngbloods (the chilling "Darkness, Darkness" and "Get Together") and the Animals ("We Gotta Get Out of This Place," on which Wilson and Nashville's Wynonna unite for a Joplinesque rave-up). The hard-singing Wilson strikes yin-yang perfection with both k.d. lang (on Lucinda Williams's "Jackson") and the pillow-voiced Alison Krauss (Neil Young's "War of Man"), even as her collaboration with Gretchen Wilson, "Bad Moon Rising," reduces the CCR classic to near buffoonery with a dominant hoedown fiddle. Hope & Glory is an uneven effort, and with its pervasive downer vibe, certainly a misnamed one. --Alanna Nash

Heart Then and Now

Stepping back in time to the 70's and 80's, the women of rock belted it out. When music was music. This is when the music group Heart was at their peak, though both Ann and Nancy Wilson are still going strong. Ann's CD of 2009, "Hope & Glory" toured with the "HUMAN 2009 TOUR".

Greatest Hits of Ann and Nancy Wilson of Heart blog post has the individual songs to listen to and buy. Provided that AdBlock is disabled.